By Guest Columnist DAVID EMORY, a transportation planner who is president of Citizens for Progressive Transit

Citizens for Progressive Transit has been a supporter of the Atlanta Streetcar project since it was just a line on a map, and we are thrilled to see the return of rail transit construction to the city after more than a decade of inactivity.

As construction continues on the Streetcar’s initial segment Downtown, we turn our attention toward key operational and policy decisions that must be made to support the project and maximize its success.

To this end, we offer the following suggestions to enhance the Streetcar’s ridership, further its appeal to those new to public transportation, and realize its transformative potential. 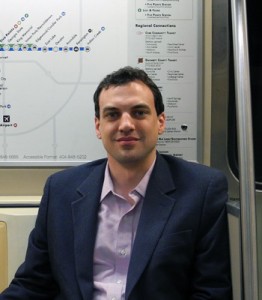 Increase the Frequency of Service. The frequency of service is a key factor in any transit line’s appeal, particularly when riders could drive, walk, or bicycle instead. Current plans call for two streetcar vehicles to be operated simultaneously, arriving roughly every 15 minutes.  This relatively infrequent service will undermine the Streetcar’s performance and its public perception, and it will likely result in the loss of potential riders unwilling to wait up to a quarter of an hour for the Streetcar to arrive.

The project has purchased a total of four vehicles, however, so increasing service would give taxpayers a greater return on their investment. Adding a third vehicle could cut the maximum wait time to roughly 10 minutes, which is more in line with comparable modern streetcar projects elsewhere in the country.

Service could also be ramped up during major downtown events such as the Final Four weekend this past March.  Increased service will not only produce higher ridership but will strengthen the public’s perception of the streetcar as an appealing transportation option.

Research has found that real-time arrival information helps a transit service maintain existing riders and attract new ones.  In the age of low-cost GPS, smartphones, and an app for everything, communicating this information can be as easy as tracking the vehicles and making the real-time data available to software developers. Real-time arrival screens at the stops can also provide this important information to riders as they wait.

Continue improving Walkability and Bikability.  Another key to the Streetcar’s success is ensuring that riders can comfortably and safely continue their trip from their Streetcar stop to their ultimate destination.

Every Streetcar trip will begin and end on foot or bike, so we must ensure that areas along the route offer a pleasant environment for pedestrians and cyclists.

The Atlanta Regional Commission has made two Livable Centers Initiative grants for the Streetcar project to improve sidewalks and streetscapes in these areas, but there is more work to be done.

Property owners, business owners, residents, and other private stakeholders should also be engaged to improve the pedestrian- and bike-friendliness of the Streetcar route.

Adopt Transit-Supportive Zoning and Planning.  Land use and zoning changes should be implemented to ensure that growth and development along this corridor is transit-supportive and pedestrian-friendly.

Even since the project was announced, we have seen new development that is inconsistent with the transit-oriented vision for the route, such as a suburban-style gas station at Edgewood Avenue and Jackson Street adjacent to the key M.L. King Center stop.

Adopting zoning policies for the Streetcar route that require transit-supportive development will help ensure that the Streetcar becomes the transformative investment it is envisioned as.

Communicate a Clear, Logical Plan for Expansion.  Finally, a clear vision must be articulated for how, when, and where the Streetcar will be expanded.  The segment currently under construction is not intended as an isolated project, but rather as the first step toward a larger network of streetcars in the city.

Whether the next steps are to the east on the BeltLine, to the north along the Peachtree corridor, or to the west toward the Westside, the public must understand future plans to expand the system.  Clear progress toward a more comprehensive system will help the public appreciate the merits of this first project and capitalize on the excitement around its opening.

The urban core of Atlanta was built around streetcars, and it is exciting to see this timeless mode of transportation returning to the streets of the city.

We hope that by taking steps to ensure that the initial segment is an unmitigated success, the project will help usher in a vibrant new era of streetcar transportation in Atlanta.