Georgia’s ambition for the Port of Savannah to smother its competitors is evident in the latest initiative – calling on the private sector to nearly double the amount of warehouse space near Savannah. 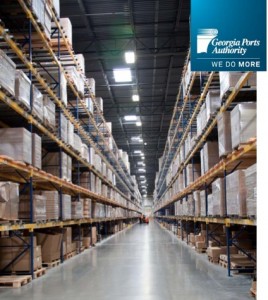 This additional warehouse space is part of a double-barreled approach to grow cargo capacity. The other aspect is a planned network of inland ports that would rival in size the Louisiana Purchase.

These expansion plans are founded on the deepening of the Savannah shipping channel to accommodate huge vessels. On Monday, the ports authority announced that a necessary contract with the federal government is to be signed within two weeks. Construction is likely to begin in early 2015.

Curtis Foltz, executive director of the Georgia Ports Authority, issued the call for more warehouse space near Savannah during the annual State of the Ports event, Sept. 25 in Savannah.

“If there’s ever been a time for us to think about speculative space, and I know that’s a tough pill to swallow coming off the downturn of 2008, these statistics bear looking at very closely,” Foltz said as he gestured to a slide that showed the following vacancy rates for warehouses, as reported in Colliers’ mid-2014 report: 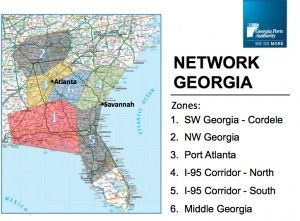 And it won’t be hard to develop warehouse space, Foltz said. Savannah offers land that’s ready to go, Foltz showed in his next slide, which was attributed to Colliers’ report:

Foltz closed his pitch with this statement: “We get people coming everyday, looking at this community. There’s nothing like being able to show them, ‘Here’s available space. We can put you there tomorrow.’”

Foltz did not address how additional warehouse space near Savannah would work with another strategy named Network Georgia.

The idea of Network Georgia is to create inland ports in six zones in the Southeast. The territory would cover all or parts of six states – From Nashville and Tri-Cities, Tenn., to Myrtle Beach, S.C. and south to Mobile, Ala. and Orlando, Fla.

The concept of inland ports isn’t novel. Georgia’s plans certainly are ambitious and were illustrated in another slide that Foltz displayed.

This one showed the trade basins of the ports of Savannah, Norfolk and New York/New Jersey. 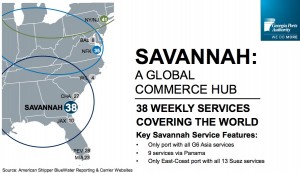 The Port of Savannah serves 45 percent of the U.S. population and is located in a region that’s expected to continue rapid growth, port officials said. Credit: Georgia Ports Authority

“Forty-five percent of the U.S. population is represented in the Savannah area [of the map],” Foltz said. “It’s the fastest-growing region, demographic region, and will remain so for the next half century.

“We are the lead port,” Foltz said. “Yes, we do need everything Charleston can build. But Savannah is the least port. We’re going to stay the lead port.”

Savannah is enjoying a phase of, “fair winds and following seas,” to adopt the old mariner’s toast. The sister port in Brunswick is performing just as well, Foltz said

Record growth during the past year was marked in five of the nine freight categories Foltz highlighted in a segment of his presentation titled, “2014: Record Growth in All Key Sectors.” New records include:

Optimistically, the deepening of the Savannah channel could begin before the end of 2014. The complexity of contracts makes it more likely that the work, on the sandbar off Tybee Island, will begin in early 2015.