Politics can be as much perception as reality, and the two appear to coincide in at least one aspect of the campaign for the transportation sales tax – traffic congestion.

The perception of traffic congestion is that has lessened on metro Atlanta roadways in the years since the Legislature first began cobbling together the referendum that is on the July 31 ballot. A report from GRTA supports the perception.

Vehicles heading into Atlanta on I-20 from Conyers approach the intersection with I-285. Credit: David Pendered

At this point in time, there’s no way to gauge the impact at the polls for voters who spend less time in traffic congestion than they did before the recession. The scant poll results that have been released do not address that question.

The latest trip time report from GRTA reinforces the perception that travel time is less than it was at the start of the decade.

The report shows the linkage between trip times and unemployment. Consequently, the report remains relevant even though the document itself is dated. GRTA released the report in April 2011, and the latest information was gathered for the year 2009 in the report by Valentin Vulov, GRTA’s principal project manager.

As a layman could guess, the length of the average trip has fallen as the unemployment rate has increased. 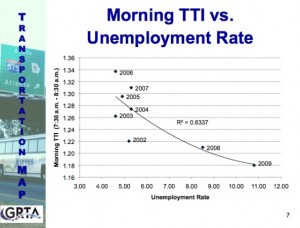 The longest travel time index in the 2000s that’s cited in GRTA’s report was in 2006. In those relative halcyon days, the index rate was 1.36 in the afternoon rush hour and 1.34 in the morning rush hour.

In November 2006, the unemployment rate in metro Atlanta was 4.2 percent, according to a report from the state Labor Department. That rate showed an improvement from the previous month, as retailers hired seasonal workers for the holiday shopping period and industries including health care and information technology added jobs to the market.

GRTA’s report showed the travel time indices at 1.2 during the afternoon rush hour and 1.18 in the morning rush hour. 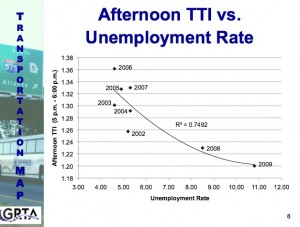 Metro Atlanta’s unemployment rate was 8.5 percent in April, according to preliminary numbers from the state Labor Department.

GRTA’s report shows that rate of unemployment would produce travel time indices at, or slightly below, those of 2008. 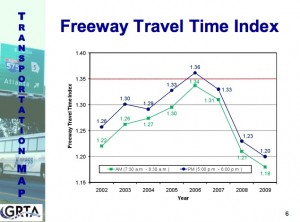 Given the national discussion over the relative accuracy of the unemployment rate, there are questions about the accuracy of a comparison of information gathered before and after the recession.

The discussion includes the true unemployment rate, given the unknown proportion of workers who don’t fit the categories of the unemployed – which does not include people who have given up the search for work and those working part-time jobs when they wish to find full-time work.

The federal Bureau of Labor Statistics defines unemployment as: