The “Occupy Atlanta” protesters have set up in a downtown green space they call “Troy Davis Park.” For them, the recently executed Georgia man symbolizes how the strong oppress the weak.

But for a more creative, stronger message, they should play up their site’s name. Woodruff Park was named for a rich, powerful Georgia man who used his wealth to empower the weak – and the rich and powerful today could use a role model like Robert Winship Woodruff. 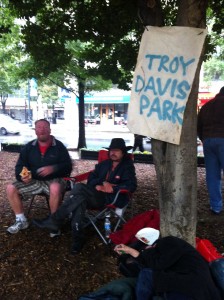 Robert Winship Woodruff’s name is on our main arts center, all over Emory University (including the main library and the Health Sciences Center) and his money seeded the Centers for Disease Control and Prevention.

Last year, from a few blocks north of the park at 191 Peachtree, the Woodruff Foundation distributed just shy of $100 million, almost all of it in this state. Of that, Grady Hospital – the primary caregiver for the uninsured — received $80.5 million.

“A lot of people say they believe that with wealth comes obligation,” said Emory archivist Randy Gue. “Woodruff didn’t just believe it, he acted on it.”

Gue, a native Atlantan, manages the massive archive of Woodruff lore on the 10th floor of the library that bears that name. The Manuscript, Archives, and Rare Book Library (MARBL) on the Emory campus is located roughly six miles northeast of the protest site.

From the 1920s to his death in 1985, Woodruff made his money by turning fizzy caramel syrup – Coca-Cola – into the world’s most recognized trademark. The world didn’t need soda, which today is linked to big health problems like obesity and diabetes. That morality aside, Coke made Woodruff rich, and he didn’t have to give away a dime. 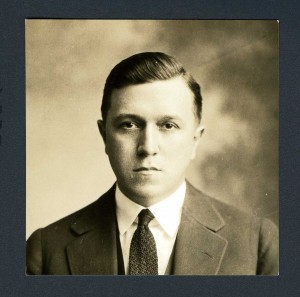 “He knew the fates of The Coca-Cola Company and Atlanta were intertwined,” Gue said, pointing out that the South had no robber barons, no Carnegies and Rockefellers.

“To be a successful home for business, Atlanta needed certain things like a top-notch medical school and an arts complex. Mr. Woodruff had absolutely no interest in arts, but he made sure we had an arts complex, and he was just about the only one who could help provide it.”

My favorite story Gue related occurred in 1929, when the stock market crashed on everyone. Woodruff was a private man who liked retreating to his quail-hunting plantation in southwest Georgia. Malaria, though, was rampant there.

Barrels of quinine might help in the short term, Woodruff realized, but why not invest in a long-term solution?

His funding brought Emory pathologists to gather data on mosquitoes, and take blood samples, at Ichauway Plantation and throughout Baker County. Their field station findings helped combat malaria – especially for troops overseas. Woodruff brokered a deal with President Eisenhower to establish what became the CDC in Atlanta. Ichauway is now the 29,000-acre outdoor laboratory of the Joseph W. Jones Ecological Research Center.

Woodruff led with purpose. He took risks and kept going. In business and philanthropy, which were the same for him, he followed his own compass more than the crowd.

Note to Occupy Atlanta protesters: Woodruff looked at what wasn’t right – from soda fountain sales to funding for Martin Luther King Jr.’s funeral – and got busy, too. His push for practical solutions was so pervasive that Emory titled its recent exhibition on his life, “The Future Belongs to the Discontented.”

“No matter how successful he was he always felt he could do more,” Gue said. “He refused to be complacent about Coca-Cola’s success.” Or what he could do to help Atlanta rise up.

A mediocre student, Woodruff only lasted a quarter at Emory’s Oxford College before being dismissed. He could have easily asked his father Ernest Woodruff, one of Atlanta’s most esteemed businessmen for a job at Trust Company of Georgia, located on the edge of what is now the protesters’ site. His dad was the bank president.

“Instead, he shoveled sand for 60 cents a day,” Gue pointed out. “He purposefully wanted to start at the bottom and make it on his own, and not rely on his father for his position. I don’t know if that’s bucking the system, or knowing what you want and how you want to get it.” 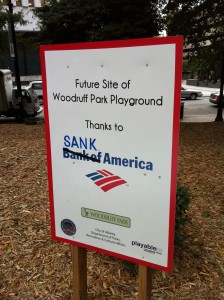 Woodruff did buy into Coke through his dad’s bank, and when Coke started to tank, Woodruff – by then vice president of White Motor Company in Ohio, agreed to take over.

For decades, Woodruff’s giving carried one main string – that he not be named. The park was originally called Central City Park because he eschewed his part in its creation. People knew him as “Mr. Anonymous.”

“I’ve spent four years arranging and describing this collection,” said Gue of the 600 boxes of Woodruff papers, “and I have never heard his voice.”

What was Woodruff’s biggest obstacle?

“A lot of people want to change the world,” Gue said. “He was one of the rare people who had the vision, motivation, and the means — and enough practical sense — to make it happen.”

While protesters from Occupy Wall Street to around the world raise their fists for wealth to be distributed, they also should point to compelling examples of how the rich can and should give with purpose and impact.

Start with the name on this Atlanta park.