The debate over the public honoring of two individuals who helped raise the city’s profile has raged since January. A city that has rarely hesitated to wipe its physical slate clean balked at renaming two downtown streets for Clayton and Portman.

The solution approved Monday provides for Clayton to be recognized by having street toppers with her name applied to the signs on a portion of Baker Street. Portman will be honored with the actual renaming of a portion of Harris Street.

The vote to create John Portman Boulevard split the council into a 9-5 outcome.

The legislation to honor Clayton with street toppers and a memorial in Hardy Ivy Park was part of a raft of routine legislation the council approved overwhelmingly in a single vote.

The City Council had been divided over the two recognitions in light of opposition from some downtown residents and preservationists.

Resident didn’t want their streets renamed for reasons that involved the difficulty of navigating around new names. Preservationists argued against removing any more of the city’s physical history.

A compromise on the Clayton memorial was reached last month between residents and the memorial commission. 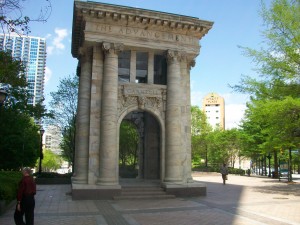 The solution involved not changing the name of Baker Street, and installing street toppers with Clayton’s name on the portion from Piedmont Avenue to Centennial Olympic Park Drive. In addition, a memorial for Clayton will be added to Hardy Ivy Park, the triangular park that begins at the northeast corner of Peachtree and Baker streets.

The Portman street renaming was introduced without fanfare last week at the City Council’s Utilities Committee. Harris Street will be renamed John Portman Boulevard from Piedmont Avenue to Park Drive, according to the legislation. The likely end is Centennial Park Drive, given the legislation also had one reference to a new name of ‘Boulevard’ and another reference to ‘Way.’

The Utilities Committee voted to refer the legislation without recommendation to the City Council.

Councilman Alex Wan, who represents a district around Piedmont Park, said he was troubled by the Portman honor moving forward without any input from residents.

Wan asked if any Neighborhood Planning Units had seen the matter, and Utilities Committee Chairwoman Natalyn Archibong responded that none had seen it. Wan said he wanted to honor Portman but disagreed with the method.

“If we vote to support this, I wonder what message we’re sending to the Clayton Commission that worked so hard to end up with a workable solution,” Wan said. “Are we sending the message that if you had held your ground, you’d have gotten what you wanted?”

Clayton and Portman will be forever associated through their work in separate fields. Their efforts helped set the tone for race relations that enabled Atlanta to proper as a business city.

But Portman’s contribution reach beyond the built environment, said Councilman Michael Julian Bond, a co-sponsor of the legislation who is elected citywide. Bond’s father is a legend in the civil rights movement.

Clayton may best be known for the annual Trumpet Awards, which highlight African American achievements. The awards were established by Turner Broadcasting in 1993 and have been broadcast to 185 countries.

Clayton arrived in Atlanta in 1965 and took a position with the Southern Christian Leadership Conference, where she worked with the Rev. Martin Luther King, Jr. and traveled with Coretta Scott King.

Clayton went on to become the first black person in the south to have a television show, in 1967. She later moved to Turner and spent 30 years there in the corporate office.

The breakdown on the 9-5 vote on the Portman memorial includes the following votes against renaming Harris Street as John Portman Boulevard:

Councilman Kwanza Hall was absent and did not vote.