Yard sales serve as peepholes into people’s lives and hearts

On fall Saturdays in the South, yard sales start early and end before afternoon football games. That makes Saturdays full of compelling narratives.

What’s inside the rest of the week – the clutter, the loyalty, the vision of something better — gets a stage for full public view. Saturday is the South’s big peephole.

Tom Zarrilli spent six years of Saturdays photographing and blogging yard sales around Atlanta (and some Friday afternoons for estate sales). As part of a citywide photographic exhibit, 19 of his color photographs are on display through Nov. 11 at the Callanwolde Arts Center.

“Faces of the Yards of Clutter” captures the utterly unique collections of random stuff for sale and barter on any given Saturday: the spare ukelele, a wet-dry vacuum, velvet paintings, glitter tube top, light sabers, fishing figurines and thigh-high boots.

An old bottlebrush, its bristles splayed like a daisy, poked out of a clutch of used kitchen utensils – the faded bouquet of domestic habit. A Brad Pitt look-alike holding a Last Supper painting that he might have stepped out of himself. 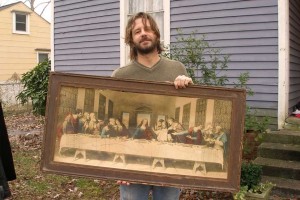 "Last Supper," photograph by Tom Zarrilli, part of the exhibit, "Faces of the Yards of Clutter."

This Southern Gothic aesthetic first drew his eye, Zarrilli said when we talked recently. “Like going to a beach after a hurricane – you don’t know what’s going to be there – the juxtaposition is amazing.”

As he amassed 8,000 shots of sales, this Oglethorpe University and Georgia State University graduate peeled back the layers of sociological meaning. While chronicling the weird details of Atlanta’s growth and change, he began to see how the human tribe marks its stages of life. Certain items became signs of our times. 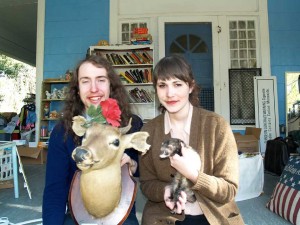 "Deer Head and Ferret," photograph by Tom Zarrilli, part of the exhibit, "Faces of the Yards of Clutter."

The arrangement of life objects at yard sales reminded Zarrilli of previous photographic targets: roadside memorials and day of the dead installations, altars for sacred objects offered in sacrifice and memory.

By day, Zarrilli is a librarian at an elementary school in DeKalb County. He was that age when he got his first camera and started photographing stuff – his toys and pets. Now 60, he recalls “prowling around, and a lot of stuff came out interesting by mistake. But I learned from that.”

As a librarian, he keeps orderly materials amid the chaotic energy of elementary students. Armed with his high-end Olympus, he began to see patterns in stuff, in people.

“Some of my best photos of objects came from estate sales of octogenarians,” he said. “It’s the most accumulation and the oddest, strangest things. You can still occasionally hit a gem in Morningside or Buckhead, but now they are more up by Northlake and further out. Virginia Highland has had almost a full turnover of people.” 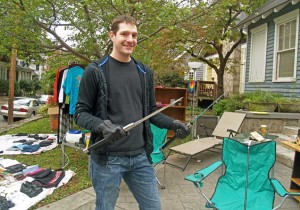 "Swords,"photograph by Tom Zarrilli, part of the exhibit, "Faces of the Yards of Clutter."

“One of my favorite photos is the 12-step book next to an old Mr. Boston Bartending Guide,” he said. “I could see getting rid of one or the other, but both? You’re really on your own now.”

He observed the slick generification of household design, “where 80 percent of the stuff for sale looks like Target, Ikea and WalMart,” he said. “It’s a loss.” He noticed fewer books, CDs, DVDs and other media.

An occasional shopper himself, Zarrilli found the best selection of men’s shoes in Midtown, where gay couples resell last season’s styles with barely any wear. 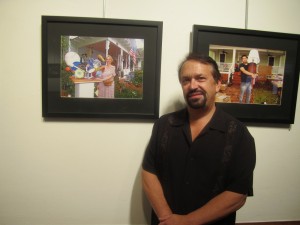 Tom Zarrilli at the opening of "Faces of Clutter." Credit: Lynn Myers

Atlanta’s population swell brought émigrés eager to furnish their homes with cheap castoffs. “It’s a great country when you can get a food processor for $5,” he said.

The Internet brought a wave of “pickers,” the people who cruise the sales early for collectibles to resell. “They don’t look at the book titles, just the ISDN numbers. Anything in salable condition that shows up on Amazon selling for over $8 or $10, they buy,” Zarrilli said. “There’s no love of the stuff.”

The depth between our stuff and us arguably shows most when we’re saying goodbye. In his Callanwolde show, Zarrilli captures the faces of sellers – careworn, loving, carefree, defiant.

My favorite is “Rainy Day,” which Zarrilli said he shot from inside his car parked at the curb – the scene that morning in Poncey Highland was so wet and miserable. 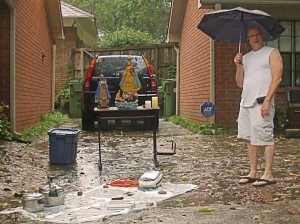 "Rainy Day," photograph by Tom Zarrilli, part of the exhibit, "Faces of the Yards of Clutter."

A sad few items on the plastic sheet are turning even more pathetic in the damp: a George Foreman grill, pressure cooker, two candles, figurines and a big orange extension cord. The seller wears flip flops, cargo shorts and a cutoff white T-shirt. Nearly the only thing kept dry under his pop-up umbrella is his Bluetooth headset – a great contrast between in touch and out of touch.

“My study is very voyeuristic,” he admitted. “Do you look at someone’s medicine cabinet when you’re at a party? If you admit it, you do want to see what they have in there.”

The power of photography is to make temporary moments permanent. Zarrilli’s lens celebrates yard sales as performance art, capturing the brief assemblage of private objects as public marketplace. His camera mimics what we all do at yard sales and what makes them so fun: In the unwanted, he has discovered greater value.