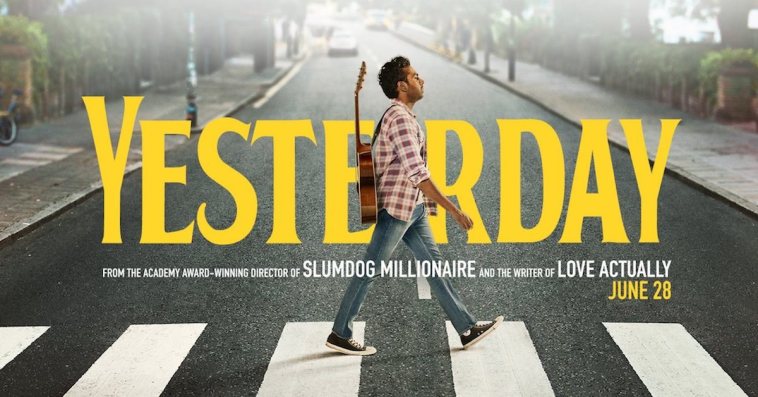 I believe in “Yesterday.”

I didn’t think I would. I’d seen the trailers and it sounded like a clever but one-gimmick movie. However, while it doesn’t do everything right, “Yesterday” sometimes takes your breath away.  Not bad for a mid-summer non-superhero movie

The gimmick is this: the planet experiences a worldwide 12-second blackout. Jack (Hamesh Patel), a struggling singer/songwriter, is biking home in the darkness when he’s hit by a bus. 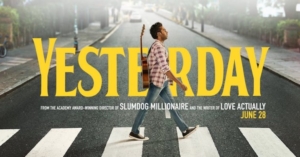 He wakes up in a London hospital, attended to by his faithful manager (and would-be girlfriend), Ellie (Lily James). Aside from a few missing teeth and a sore head, he seems to be okay. Only, a slightly weird thing happens when he’s about to check-out. Thanking Ellie for her care, he jokes, “Will you still need me, will you still feed me when I’m sixty-four?”

She smiles and replies, “Why sixty-four?”

And so it begins. While Jack was in his coma, the rest of the world apparently forgot the Beatles ever existed. Or maybe the Beatles never did exist (Coca Cola and cigarettes have been wiped away, too).

Given a new guitar by his pals, Jack strums a few lines from “Yesterday.” They are astonished. It’s so beautiful. It’s so perfect. It’s so…when did he write it?

After checking the Internet (nada) and his own collection of old CDs (Bowie, but no Beatles), Jack slowly realizes he’s been handed an unfathomable opportunity. He’s a decent singer and a long-time Beatles lover. If he can just remember the lyrics, he can embark on a new career as a kind of one-man Beatles cover band.  Except, everyone thinks he actually wrote these Fab new songs (not that anyone knows the word “Fab” either).

Ed Sheeran – much more endearing than he was in his “Game of Thrones” cameo – shows up and asks Jack to open for him. He knows sheer genius when he hears it. After Jack tosses off a few more classics, Sheeran is forced to admit that he’s Salieri to Jack’s Mozart – though he does insist that the lyric “Hey, Dude” is better than “Hey, Jude.”

The movie is full of little jokes like that. When Jack goes Hollywood, he’s duly media-massaged by a dozen or so music execs (led by Kate McKinnon as Jack’s Oh-So-Malibu agent). They’re worried about the appropriateness of calling something “The White Album.” It lacks, well, diversity.

And Jack can never get the lyrics of “Eleanor Rigby” right. Did she darn socks? Or was it Father McKenzie? 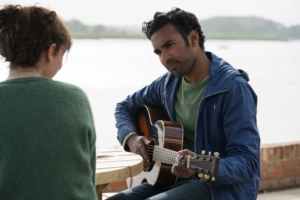 A scene from “Yesterday”

That brings up a potential problem: How Beatle-savvy do you need to be to get “Yesterday?” Not all that much, I would think. However, the picture does assume a certain amount of Beatlemania on the part of its audience. Especially when it comes to its unexpected, sweetly melancholic coda.

Unfortunately, though James gives it her considerable best, the love story doesn’t work (Patel isn’t exactly right as a romantic interest, though his singing voice is lovely).  And McKinnon, while spot on (as they say), seems to have parachuted in from an entirely different movie.

Screenwriter Richard Curtis (“Love Actually,” “Notting Hill”) and Oscar-winning director Danny Boyle (“Slumdog Millionaire”) are brave enough to bring up all sorts of existential Fab Four questions. What was it about those Liverpool lads that made them transcendent? Was it the music?  Was it their chemistry?  Was it the times? Was it all of the above?

And, would they make it today?

The whole notion of unearned fame was taken up brilliantly by John Ford over a half a century ago and is echoed here when Sheeran says admiringly to Jack, “I’ll have a cider with the man who wrote ‘Yesterday.”” Or as Ford had it, “Nothing’s too good for the man who shot Liberty Valance.” (said to Jimmy Stewart, who didn’t).

Perhaps the most persuasive argument one can make for seeing “Yesterday” – aside from it being charmingly nostalgic, family-friendly and full of great music – is pretty simple:  there’s truly nothing else out there like it right now. And that should be reason enough.