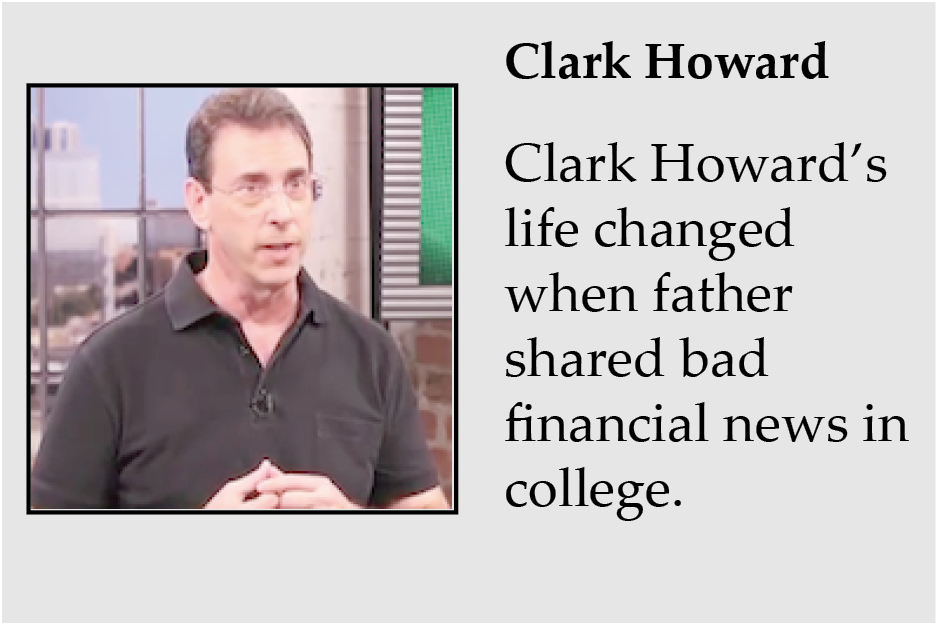 Clark Howard came home for Thanksgiving from his sophomore year in college and faced a very grim household. From the sad faces he found around his family’s dinner table, he knew something bad had just happened. What he didn’t know is that something very good and life-changing was about to spring from that very same Moment.

When the dishes were cleared from Clark’s holiday table, his father asked him to stay afterwards to talk with him alone. Clark’s first guess when he saw his relatives’ faces and his father’s “awful” face, was that his father was going to announce that he was dying. Instead, his dad confided with Clark that he had been fired from his job and that he couldn’t continue to pay for Clark’s education.

Relieved his father wasn’t on the verge of death, Clark breathed a sigh of relief. His next thought was about the same subject most teenagers his age would naturally focus on: themselves, he told us in our Moments HD Video.

“Wait, surely you and mom have savings,” he asked.

Clark thought back on his youth, growing up in an upscale home in Atlanta, graduating from Westminster and spending more than a year at American University in Washington, D.C. “I had always thought my parents had a bottomless pit of money,” he said. “But then I found out that day that my parents had never been good savers.”

Not missing a beat, Clark returned to Washington, switched his classes to nighttime and landed a day job as a civilian employee of the U.S. Air Force, later working for the Department of Housing and Urban Development. “It was a good government job – particularly for a college student,” Clark recalls. “I immediately began to live off of one pay check and I put the next one into savings.”

He graduated from American with a bachelor’s degree in Urban Government and got a job at IBM, where he took advantage of an employee scholarship program. He worked full-time each day as a bill collector while taking night classes, earning his MBA within a year from Central Michigan.

Known today primarily as the very friendly and helpful daily afternoon consumer adviser to the more than 1 million metro Atlanta listeners who tune in WSB each week – as well as to the thousands of readers of his weekly column in the AJC’s Thursday Deal Spotter section – this is actually Clark’s second and unintended career. In 1981, he started a chain of travel agencies in Atlanta that he sold six years later. He then “retired” at the age of 31 to the white sandy beaches of Florida when he was asked to be a guest on WGST-AM’s travel call-in radio program. Soon after, The Clark Howard Show was born.

Today Clark’s boyish, Southern charm is enjoyed by millions of listeners across America as he displays genuine empathy for the thousands who call in to his shows – not to mention those (6,000 emails and 1,500 calls each week) assisted by the 150 volunteers who staff his Consumer Action Center, which he started in 1993. Of his nine books, two reached number six and seven on the The New York Times Bestsellers list. His website, www.clarkhoward.com, appears on my occasional suggestion list to my children.

Drawing on the generosity of his loyal audience – many of whom have learned to earn or save millions of dollars by following his advice – Clark has built 46 homes for Habitat for Humanity. After the terrorist attacks of September 11, 2001, Clark joined the Georgia State Defense Force, through which he attends monthly training weekends around Georgia and even assisted evacuation of New Orleans residents after Hurricane Katrina.

Clark’s intense devotion to thriftiness has built his iconic brand – though he’s been known to loosen the purse strings a lot for charitable causes and for his family, including his wife, two daughters and a son.

I talked Clark into kicking off our new Moments feature when I saw him at the YMCA, which he has publicly endorsed for its economic value (he spends much of his radio time warning consumers to avoid the ever-growing scams in today’s tough times). He often stops his workout routine to listen to people thank him for assisting them with his seemingly endless knowledge of finance, shopping and travel bargains.

But for Clark, it all comes back to saving, a lesson he first learned in a moment at the Thanksgiving dinner table in 1973. Since then, he has saved a lot of money for himself and others and has personally saved a lot of his fellow Americans who find themselves in a financial pinch – these days more than ever.

Next week in Moments: Former Atlanta mayor Shirley Franklin, on the Moment she first saw the vision for the East Lake community.

You are invited to watch our 1-Minute Video: “Moments” on SaportaReport
adminmegan December 12, 2011 5:31 pm

You are invited to watch our 1-Minute Video: “Moments” on SaportaReport