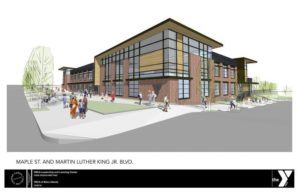 YMCA of Metro Atlanta will build a new headquarters, conceptual drawing seen here, on the Westside.

The YMCA of Metro Atlanta, the oldest nonprofit in the city, is leaving its home of more than 40 years in downtown Atlanta to go to the Westside. It is buying Jordan Hall with plans to demolish the building to build a Leadership and Learning Center that will offer early learning opportunities to Vine City.

It is in that spirit that the YMCA decided to locate its new $20 million headquarters on Martin Luther King Jr. Drive, a couple of blocks west of the new Mercedes-Benz Stadium.

In addition to serving as headquarters, the new facility will house its Head Start early education program and serve about 70 children in the community.

Atlanta Mayor Kasim Reed said the Y’s decision to move to Vine City is a concrete example that efforts to rejuvenate marginal neighborhoods on the Westside are beginning to take off.

There is much to celebrate with the Y’s decision to become even more vested in the communities it serves.

But, speaking for myself, I am disappointed the Y wasn’t able to incorporate the preservation of Jordan Hall in its plans.

One of my biggest fears for the Westside is that its rich history will be erased as new investments are made.

YMCA leaders say they studied options to save Jordan Hall but decided it was more cost effective to build new. They say they will look for ways to pay homage to the building’s history.

Most recently, Jordan Hall was part of the Morris Brown College campus. But it began as the Edmund Asa Ware Elementary School, one of the first schools in the city to educate African-American students. It was named after the first president of Atlanta University.

The Y still needs to get permits to move forward with its plans. It hopes to move into its new building by the summer of 2018.

Wouldn’t it be wonderful if the Y and community leaders could find a way to preserve the area’s past while welcoming the future?

Previous Article
Faux news and the toll of kayfabe
Next Article
Last call: Deadline for Toys for Tots this Sunday!