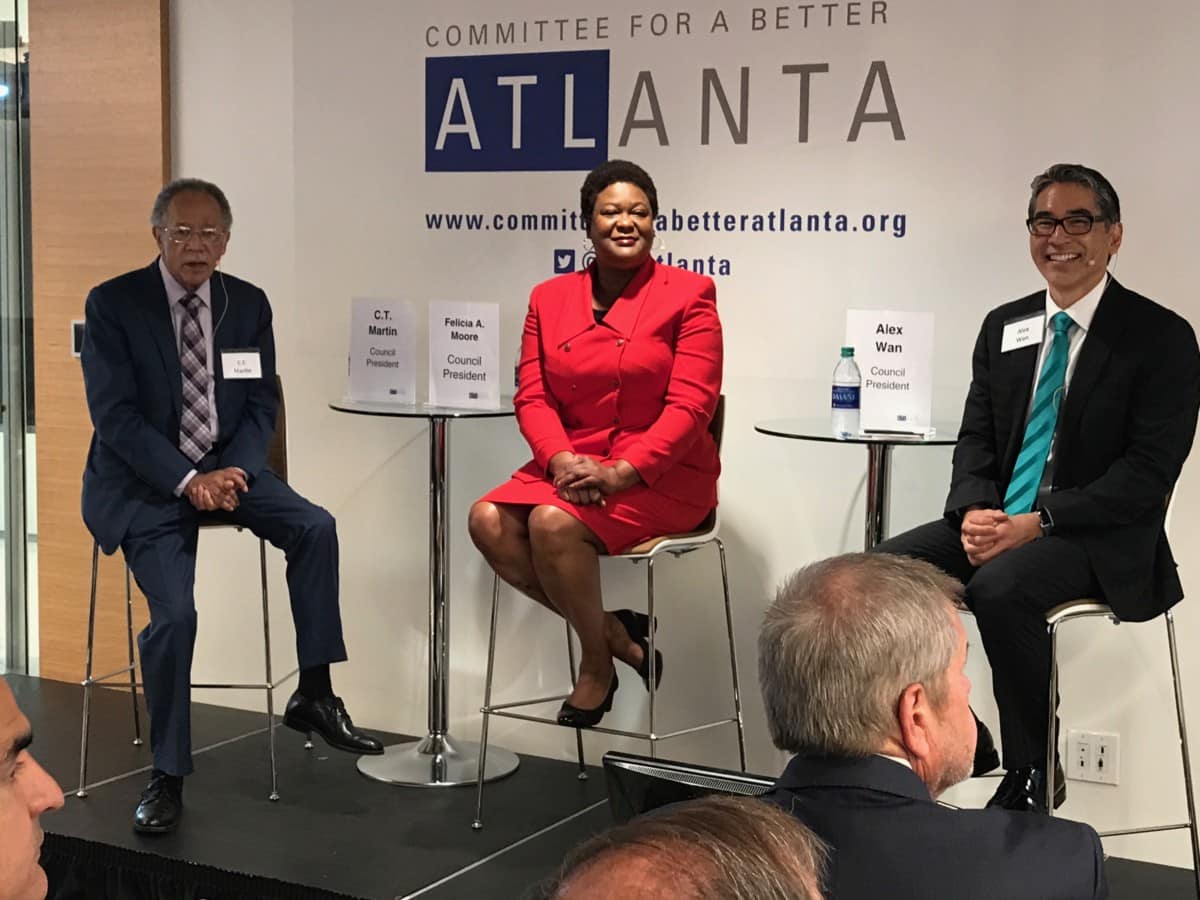 The Committee for a Better Atlanta held its version of political “speed dating” Thursday with four different forums with candidates running for Atlanta mayor and president of the Atlanta City Council.

But most of the buzz in the room circled around the one mayoral candidate who did not attend – Atlanta City Councilwoman Mary Norwood, who is ahead in the polls.

The candidates were given 30 seconds to respond to a variety of questions – from casino gambling to affordable housing to transportation to sales tax for the arts.

The CBA did hear from 11 mayoral candidates, including three who have not always been invited to participate in mayoral forums – Al Bartell, Debra Hampton and Laban King.

Here are some of the highlights: 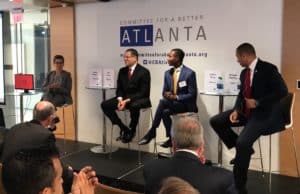 Cathy Woolard: It’s time to focus on community development, and the city needs a mayor who will respect Atlanta’s neighborhoods. It’s essential we build an integrated transportation network in Atlanta. Compensation and benefits play a big role in being able to retain our police officers.

John Eaves: He has proven leadership at Fulton County with transformation of Grady Hospital and recent T-Splost vote. He believes in Concept 3 for a regional transportation system, and he supports a transit line from the Lindbergh MARTA station to the CDC. City needs to improve permitting process.

Laban King: Wants the city to be innovative and inclusive. A lot of people are not experiencing the city’s growth. He sees the homeless situation as getting worse with a hidden homeless community. He called the term affordable housing “dangerous,” and said there should be “income-based housing.”

Michael Sterling: Believes we’ve made some progress with the homeless situation, but he believes we can do more to work across different entities. We need to make sure our police officers are paid fairly. He also feels there’s been progress on the city’s building permits process, but more can be done. 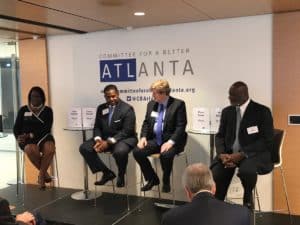 Debra Hampton: As a native from Alabama, she has seen casinos and gambling be a positive move for communities because they bring in revenue. She described sustainability as a way of bring people together to make Atlanta better. She believes a good relationship between the mayor and governor is very important.

Ceasar Mitchell: He wants Atlanta to be one of the greatest cities in America. He is open to having a casino as long as gaming does not take away from our community. The BeltLine and the city need to have affordable housing, and he supports inclusionary zoning and dedicated funds for the arts and green space.

Peter Aman: He is open to having a conversation about casinos, but likely would not support one in downtown. He supports the BeltLine and wants make sure there’s affordable housing and possibly reduce parking requirements. He believes in  the city having strong relationships with the state and region.

Al Bartell: He would not support casinos because Atlanta’s neighborhoods could not handle the impact. He described sustainability by saying a corporate model of city government, versus an urban model, is not sustainable. He said communities are fighting the arts, especially environmental arts. 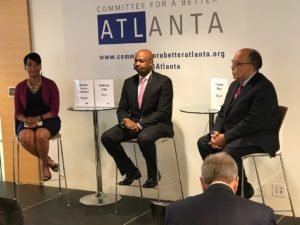 Keisha Lance Bottoms: She wants to look at opportunities to improve the arts and culture. As a whole, she believes the Neighborhood Planning Unit system is valuable, but there’s room for improvement. She would appoint a director of education because our schools impact everything in our city.

Kwanza Hall: He would support investment in the arts. He has actively participated in the neighborhood process, and he believes there needs to be a “massive overhaul” of the NPU system. As a former school board member, he believes the city can do more around human capital by bringing more people to the table.

Vincent Fort: City Hall has lost its way with people more concerned about enriching themselves rather than the city. He is skeptical about whether sales taxes and bond referendums benefit all parts of the city. He supports a community schools model, apprenticeships and free two-year tuition for post high school education.

In a conversation after his panel, Fort was especially critical of Norwood not showing up.

“Her not showing up tells me she’s not willing to engage in the back and forth in the debate and discussion,” Fort said. “I’m really concerned she’s taking voters for granted.”

“I’m disappointed she wasn’t here, because we need to hear from all the candidates,” he said.

Nancy Flake Johnson, CEO of the Urban League of Greater Atlanta, was surprised Norwood did not participate in the Committee for a Better Atlanta, which is an organization that includes the Metro Atlanta Chamber and several other civic organizations who will give each candidate a score based on their answers and qualifications.

“This is an important forum for Atlanta citizens to compare and contrast candidates on their positions on issues that affect the city,” she said.

Political pundit Brian Robinson said Norwood may be following a flawed campaign strategy where a frontrunner avoids forums because appearances can damage their lead in polls.

“Today would have been a chance to stop that storyline,” Robinson said, adding that the forum was not one with “gotcha” questions.

One of the leaders behind the Committee for Better Atlanta, A.J. Robinson, said Norwood wasn’t able to attend Thursday morning.

“I’m optimistic that Mary will be participating in the CBA process going forward,” Robinson said. “It’s unfortunate she wasn’t able to come.”

Norwood spokeswoman Ellen Adair Wyche wrote in an email that the mayoral candidate had a “long-standing travel commitment that could not be changed.”

“Hopefully this one event will not be a singular make or break opportunity to extend her relationships with the CBA and key business leaders,” Wyche wrote. “She looks forward to working with the Committee for a Better Atlanta, the Atlanta Metro Chamber and other business groups, corporations and business owners to articulate a common civic and business agenda.” 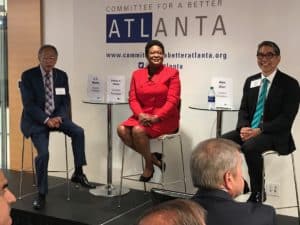 C.T. Martin: With the anticipated number of new council members expected in 2018, Martin said the city will need stability and maturity in the president role. Said he would instill a cooperative spirit on council, and we would be open to the business community.

Felicia Moore: Her top issues are ethics, accountability and transparency, and she said she would want to strengthen her relationship with the business community. She views the business community as a partner and constituent. She would meet with council members to talk about moving the city forward.

Alex Wan: He would be a reasoned and collaborative voice on council and would seek to change the tenor of how business is done in the city. The president of council can convene stakeholders, and he would meet with all councilmembers regarding their committee appointments. Said he would be a partner with the business sector.

The Committee for a Better Atlanta held a candidate forum on Monday for all the people running for City Council seats – about 50 candidates.

A.J. Robinson said the CBA will be having another round of meetings with the candidates in the fall. The nonpartisan election will be held on Nov. 7. Runoffs would be on Dec. 5. R

obinson described Thursday’s forums as a political version of speed-dating. As the election gets closer, it is expected there will be fewer candidates for several of the races.

“The forum today was phenomenal,” said Tharon Johnson, a political pundit who works with Greenberg Traurig. “It showed there’s tremendous leadership working together.” 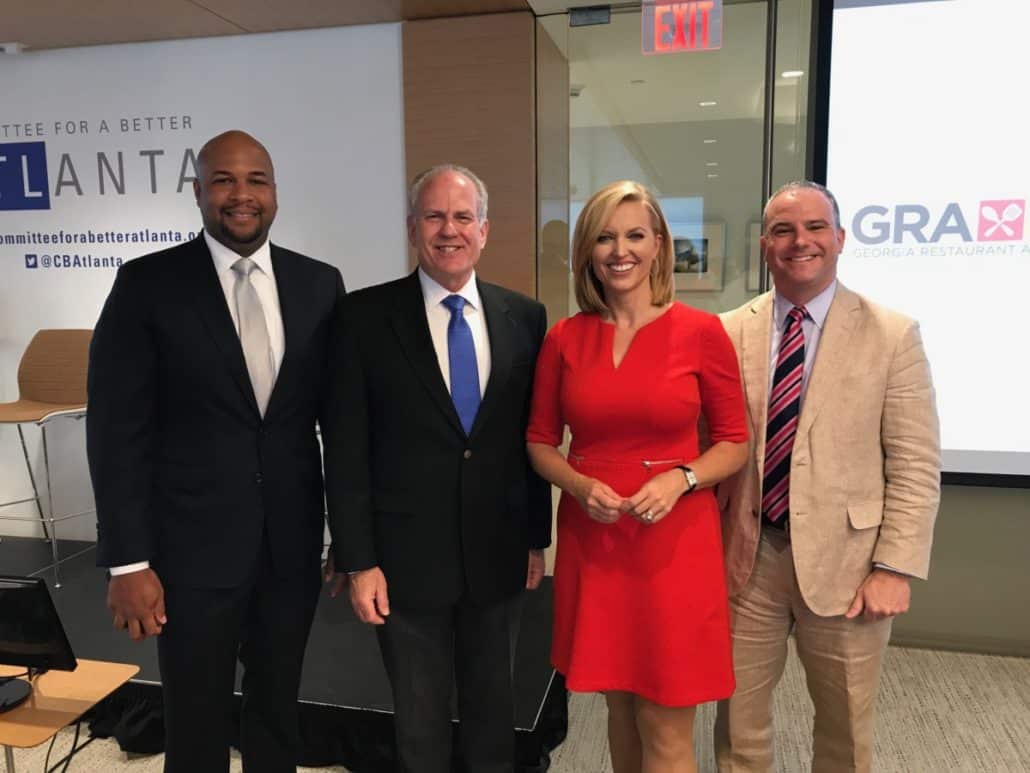