Global Health Security: The Fight Against Malaria Must Continue

On April 25, the world recognizes World Malaria Day because it remains a leading cause of preventable illness and death around the world. Despite being eliminated from the U.S. decades ago, malaria  continues to affect American lives.

The United States (U.S.) Centers for Disease Control and Prevention (CDC) has a long history of fighting malaria. In fact, in 1942, CDC, known then as the agency for Malaria Control in War Areas, was designed to keep the southeast U.S. malaria-free during World War II. By the early 1950s, the U.S. succeeded in eliminating malaria within its borders.

Since the 1970’s, the number of malaria cases diagnosed in the U.S. has been increasing due to the increase in international travel. In 2017—the most recent year with finalized data—domestic malaria cases rose to 2,151, the highest number in 45 years. For a preventable and treatable disease, this is simply unacceptable. Georgia, which tends to be in the top quarter of all US states for malaria cases each year, reported 82 cases of malaria in 2017.

Until recently, artesunate—the first line drug and global standard for treatment of severe malaria—lacked FDA approval. For the past two years, in the absence of a commercially available product, CDC prepositioned artesunate at 20 select sites across the U.S., including its quarantine stations, to deliver the life-saving drug within 24 hours of receiving an urgent request. In Atlanta’s Hartsfield-Jackson International Airport, the CDC quarantine station functions as one of these critical sites and has sent lifesaving doses of Artesunate when called.

In addition to treatment, CDC is also focused on preventing travelers from catching malaria in the first place.

Reducing the burden of malaria around the world

Malaria still kills hundreds of thousands of people around the world every year, mostly young children. However, with proven tools and methods such as insecticide-treated bed nets, better case management, expanded use of preventative medicines,  and insecticide resistance monitoring, these numbers should come way down.

Progress to date by CDC and the global community has been tremendous. In fifteen years, malaria deaths have been reduced by more than half a million annually, which has resulted in 7.5 million lives saved since 2000.

For years, CDC has worked with partner countries to build capacity and systems to combat malaria. This also equips them to better respond to other public health threats like COVID-19. These efforts keep America and the world safer.

In 2020, to counterbalance the devastating effects of COVID-19 on the fight against malaria, CDC advised on the development of the World Health Organization’s Tailoring malaria interventions in the COVID-19 response, which provides specific technical guidance for maintaining essential services for malaria in low-resource countries.

CDC, alongside its partners from the U.S. President’s Malaria Initiative (PMI), is also rolling out new projects to improve our understanding of how to safely deliver malaria control interventions in the context of the ongoing COVID-19 pandemic.

In order to succeed in the fight against malaria at home, the fight must continue abroad.

To read more about how CDC’s Division of Parasitic Diseases and Malaria fights malaria and other parasitic diseases around the world and in the U.S., see the Division’s new Strategic Priorities 2021-2025. 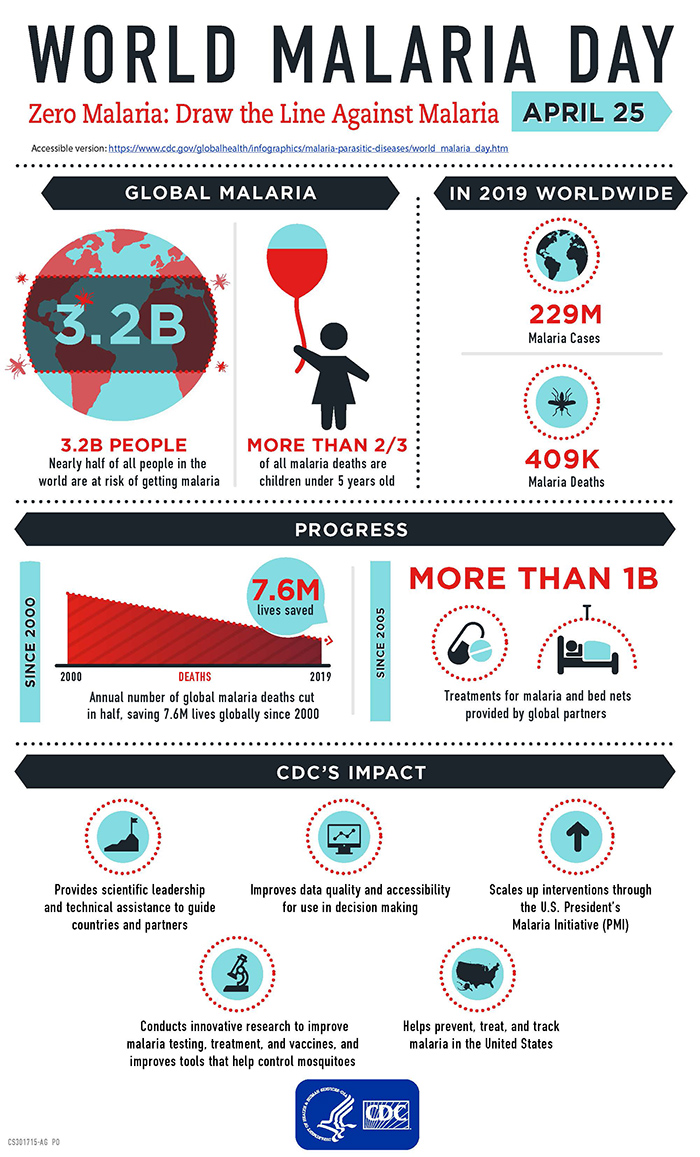