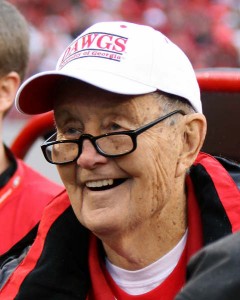 Larry Munson, legendary broadcaster for the University of Georgia, died last month of complications from pneumonia. (Photo by Rob Saye)

The last call of famed University of Georgia football announcer Larry Munson may have been his best, coming after he passed away last month at age 89. The final bequest of the Voice of the ‘Dawgs rang clear: No flowers. Donate instead to the Noah Harris Cheerleading Scholarship.

Munson’s call was the latest resurrection of the memory of a young man with whom Munson and multitudes shared a passion for the red and black. The contrast, of course, is that Munson’s voiceover lasted 42 years; Harris, at age 23, sacrificed his life for the red, white and blue.

Munson and other UGA fans felt the loss far worse than any hobnailed boot: one of the state’s best and brightest, lost to an rocket propelled grenade.

Raised in a handhewn cabin in north Georgia, Harris exuded an appeal that straddled generations who watched him cheer on the sidelines. Old and young could see his future potential for leadership and appreciate his passion for tradition. 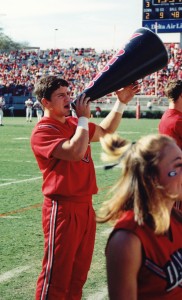 Noah Harris became a cheerleader after offering to help a friend practice for tryouts. (Photo courtesy of UGA)

“At Larry’s house, I saw the big trophy fish where Noah’s dog tags had hung,” said Rick Harris. “Larry had told Noah that when he got back from Iraq, they’d go fishing out West. But Noah didn’t make it.”

Nothing to cheer about there. Could there ever be, when the loss is this deep?

The answer lies in the persistent honoring of what Harris stood and died for. Well before Munson’s last call for scholarship donations, there were far greater gestures.

Since Harris’ death in 2005, “There have been two dozen babies named after Noah, and my wife Lucy is constantly knitting baby blankets from red, white and blue yarn,” said Rick Harris, 65, a Marine who served in Vietnam, later raising his son as a stay-at-home dad. “So many young people don’t have clear role models, and that’s what Noah has become.” 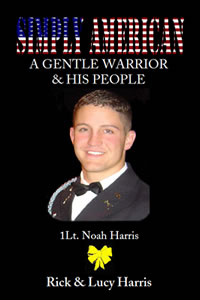 Harris' life is the subject of a free online book. (Courtesy Harris family)

The post office in his hometown of Ellijay is named for Noah Harris. His parents recently published a free online biography called, “Simply American: A Gentle Warrior and His People.” In their front yard, Harris’ ashes are scattered under a big triangular rock pointing due west to the sunset. There, visitors have left dogtags and smaller rocks from around the world.

If one word could sum up Harris, it would be wholesome. Even —  dare it be written — Tebowesque.

For all his chiseled looks and winning demeanor, Harris’ source of strength was simple. His motto was “IDWIC,” – an acronym for “I do what I can.”

“Noah had to struggle and sacrifice to get to the level he did,” Rick Harris said. “He fought each step along the way to do what he did. He started in wrestling by coming in sixth place, then worked his way to fifth and fourth and so on, step after step.”

By the time he chose UGA, Harris had won a state championship in wrestling, captained his football team and was named the top scholar-athlete in Georgia. As an actor, he had logged 1,000 hours on stage. He loved the spotlight. 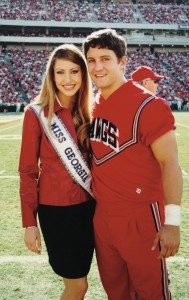 “He wanted to go to UGA and play football, but he wasn’t big enough to be anything but a tackling dummy,” his father recalled. “It was a fluke thing that he met this girl at a basketball game who was trying out for cheerleading, and she needed a strong male to practice her stunts. She showed him what to do so she could practice, and one thing led to another.”

To shine on the sidelines, under the craggy gaze of Munson, Harris relied on unwavering core strength. The squad called him “Quadzilla,” because he could balance four female cheerleaders in a diamond formation.

“IDWIC” helped him focus, from building fences for a summer job to working on Capitol Hill for Nathan Deal, now governor, then a congressman.

“You just knew Noah would be productive, a leader for our society,” said Loran Smith, Munson’s longtime sidelines reporter.

After 9/11, Harris decided that what he could do for his country was to join the Army. He joined the campus ROTC then entered the Army full-time after his 2003 graduation. 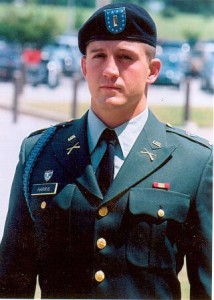 Army 1st Lt. Noah Harris enlisted through ROTC after 9/11. His motto was "I do what I can." (Photo courtesy of UGA).

“I realize that the end of life is so final, and it could come quickly to anyone, me included,” he wrote in a 2001 course assignment for UGA’s Institute for Leadership Advancement, published with other correspondence after his death. “I will make the most of the time I do know about – the present.”

While the military beckoned Harris off the sidelines, 50 years earlier the military had helped Munson find his place on the sidelines. After serving in World War II, Munson used his discharge pay to learn broadcasting,

“I actually heard a commercial on a radio station,” Munson once said about how he got his first job. “They were begging for announcers. Guys hadn’t come back yet [from the war] and more and more new radio stations were popping up. There was a shortage like you can’t believe.”

In Iraq, Harris in effect cheered on his troops. He sent an email on  June 17, 2005, mentioning the start of a leadership and self-development program for his troops from Fort Benning’s Third Infantry Division. Harris intended “to set them up for success when they return to the U.S.” 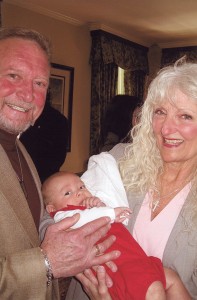 Rick and Lucy Harris hold one of the baby's named to honor their son killed in Iraq. Noah Andrew Jones was born on Sept. 14, 2010.

Later that day, he was killed in an attack on his Humvee.

A scholarship was a seed planted for someone’s future education, nurtured by those whose education brought them into contact with Harris. The Harris Scholarship is expected to be awarded annually to a student-athlete on the cheerleading team who demonstrates outstanding character, leadership, and dedication to the athletic program and the community.

That legacy, carrying Munson’s stamp of approval, represents an awful big megaphone to fill. No one has had a chance yet, because the scholarship isn’t yet endowed. That’s why Munson made his final call.

Will the Bulldog Nation hunker down this time for their fallen heroes? If they do what they can do, that answer surely will be yes.

Contributions to the scholarship fund can be made payable to the UGA Foundation with the designation: Noah Harris Cheerleading Scholarship in memory of Larry Munson. They may be sent to the Georgia Bulldog Club, PO Box 1472, Athens, GA 30603.