At a press conference Wednesday morning, Gov. Brian Kemp said it was a “historic day” as he named businesswoman Kelly Loeffler as his pick to fill the seat of out-going U.S Sen. Johnny Isakson (R-Georgia).

Isakson decided to step down because of health reasons related to Parkinson’s. 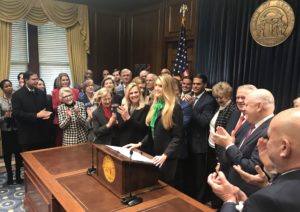 During the press conference, Loeffler stood in between the governor and her husband, Jeff Sprecher, the CEO of Intercontinental Exchange Inc. (NYSE: ICE) – the parent company of the New York Stock Exchange. Loeffler is an executive of ICE and the CEO of its financial services subsidiary, Bakkt. Loeffler also is a co-owner of the Atlanta Dream, a WNBA team.

“Kelly has really lived the American dream,” Kemp said. “Like Senator Perdue, Kelly is an outsider. Like our president, Kelly is ready to take on the status quo. She knows as does soon to be senior Sen. David Perdue, the road to socialism will not run through Georgia.”

Both Kemp and Loeffler spent much of the press conference reinforcing her conservative credentials. The choice of Loeffler has been criticized by conservative commentators, who had been pushing for Kemp to name U.S. Rep. Doug Collins (R-Georgia). Even President Donald Trump had lobbied Kemp to name Collins to the seat.

She called herself a devoted wife and proud patriot who is a “lifelong conservative” and “strongly pro-life.” She added that she is pro-Second Amendment, pro-Trump, pro-military and pro-law.

“I know I have a lot of work to do to earn the trust and support of my fellow Georgians,” Loeffler said. “I’m not a career politician or someone who has run for office. I’ve spent 25 years trying to build a business.”

Loeffler also touted the successful economy, saying the nation is growing jobs at a record pace. 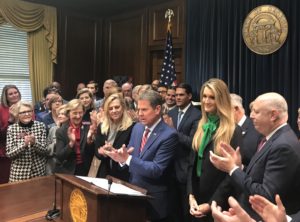 “I’ve been called soft-spoken. But I’ve also been called a lot worse,” she said. “In Congress, I may not be the loudest voice in the room. But you don’t have to be shrill to be tough. And when it comes to fighting for Georgia, I will never back down. No one will fight harder for our state, our president, and our conservative values.”

She also said that contrary to public perception, “not every strong American woman is a liberal.” Saying she was angered by the impeachment process, she described “Washington Democrats” as wanting to turn over much more than one election.

“The only thing they agree on is that they hate Donald Trump,” Loeffler said. “Elizabeth Warren and Bernie Sanders have taken over the Democratic Party.”

“We need less critics and more public servants,” Kemp said. “We need to unite over a shared vision for our future. There’s one thing I know for certain when it comes to making significant reforms, and that is this. We are better, stronger together.”