Work to begin in May on $45 million Rodney Cook Sr. Park on Atlanta’s Westside 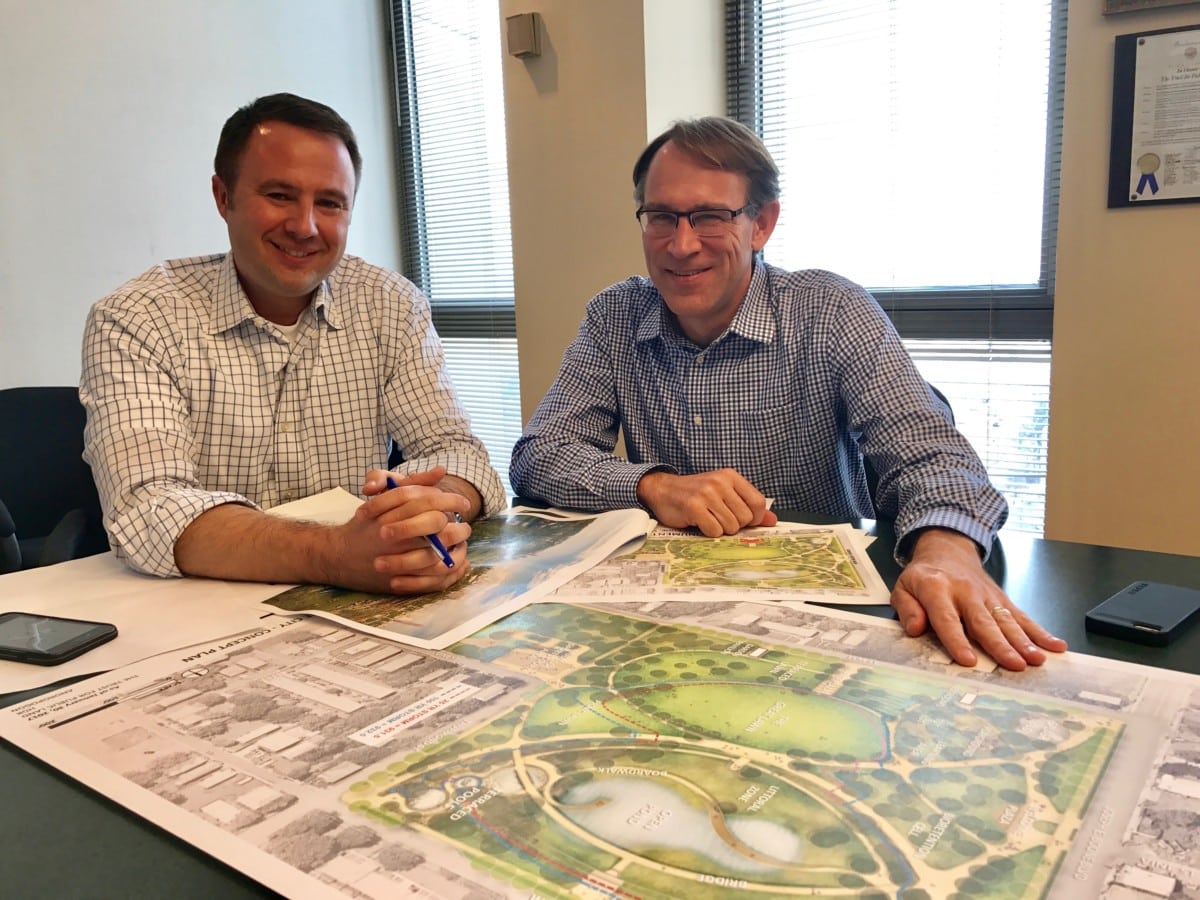 The Trust for Public Land's Jay Wozniak and George Dusenbury go over the plans for the new Cook Jr. Park

Work will soon begin on a grand new $45 million park on Atlanta’s Westside.

A final design for the 16-acre Rodney Cook Sr. Park in the historic Vine City community shows a park that will have something for everyone.

It will have a large pond that will be hold storm water in the event of a major flood. It will have a splash-pad, a playground, a great lawn with a natural amphitheater, a performance plaza, a picnic pavilion, courts for multi-use sports, a fitness area, a boardwalk, an overlook and terraced pools. 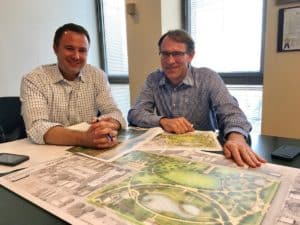 The Trust for Public Land’s Jay Wozniak and George Dusenbury go over the plans for the new Cook Sr. Park

The park, which is supposed to open in the spring of 2018, has had a host of partners – the City of Atlanta’s Department of Watershed, which will invest up to $20 million on the storm water retention pond; the City of Atlanta Parks Department; the Trust for Public Land, which is raising $12.7 million for the park design and development; the National Monuments Foundation headed by Rodney Cook Jr., who has raised money for a Peace Column and Peace Pantheon; as well as numerous foundations, community and city leaders.

“The park will be a driver of the revitalization efforts in the community,” said George Dusenbury, the Trust for Public Land’s Georgia director. “It’s an early win, and it’s significant. It will virtually eliminate flooding in the neighborhood.”

Vine City has experienced devastating floods in the past couple of decades, and this park will be able to accommodate a 100-year flood event. The project is similar to the Historic Fourth Ward Park, a model that married the need for a storm water retention pond with a beautifully landscaped park.

The Trust for Public Land has received a $2.5 million grant from The Arthur M. Blank Family Foundation for Cook Park.

A rendering of the Rodney Cook Sr. Park with a view of new Mercedes-Benz Stadium and part of downtown (Special: Trust for Public Land)

“Cook Park symbolizes the real, tangible change that is happening in Atlanta’s historic Westside neighborhoods,” said Penelope McPhee, president of the Blank Foundation, in a statement. “The Blank Foundation has a longstanding commitment to parks and green space, investing millions of dollars in the belief that parks bring communities together, enrich the lives of children and families, create a healthier environment, and spark a lifelong love of nature.”

A capital campaign committee, co-chaired by King & Spalding LLP attorney Patricia Barmeyer and Georgia-Pacific’s Curley Dossman, has just launched the effort to raise the rest of the funding for the park – about $10 million more. Former Atlanta Mayor Andrew Young is an ex-officio member of that committee. Dusenbury said the goal will be to raise the money by the end of the year.

A ground-breaking for the park is scheduled for May 19, and the city will begin doing soil remediation on the site.

Jay Wozniak, the Trust for Public Land’s urban parks director in Atlanta, said the design also will incorporate the transformation of Joseph Boone Boulevard into a complete street with PATH trail on the northern end of the park.

Because of the soil remediation and the pond, Wozniak said there will be a “substantial loss of trees” – especially east of Vine Street. In all, 2,600 inches of “tree caliper” will be removed – though they will be able to preserve a number of 40-inch and 50-inch oaks and elms.

The partner will replant the same amount of “tree caliber” – not necessarily within the park. But Wozniak said “the goal is to place the trees as close to the site as possible.” 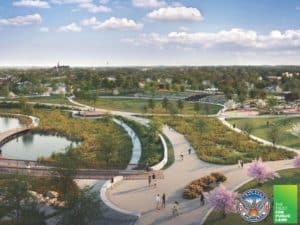 One of the goals of the design was to pay tribute to the historic Mims Park, which was designed by the renowned landscape architecture firm of Frederick Law Olmsted in 1900. The park later became the site of the Bethune Elementary School, just a couple of blocks away from Cook Park.

Rodney Cook Jr., who also has envisioned having about 18 statues of civil rights leaders placed throughout the park, has raised enough money for a Peace Column. Civil Rights leader C.T. Vivian has donated his library of several thousand books to the National Monument Foundation.

“It will be housed in the Peace Column Museum,” Cook wrote in an email. “The base of the column is large, and contains the museum, much like the Millennium Gate Museum exhibition spaces being primarily under the arch (at Atlantic Station).”

The final design for the park culminates many years of negotiations and plans between the various partners and the community. Originally it was going to be named Mims Park in honor of Mayor Livingston Mims, one of Cook Jr.’s ancestors. 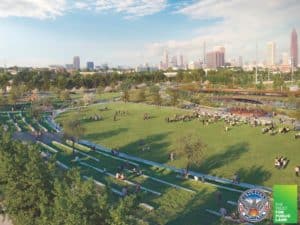 A rendering of Cook Park looking towards Midtown (Special: Trust for Public Land)

Work on the park project really began to advance when the Atlanta City Council decided last fall to name the park in honor of Cook Jr.’s father, Rodney Cook Sr., an important leader who helped bridge racial divides during the 1960s.

“Overall it’s been a good process,” said Amy Phuong, commissioner of the Department of Parks and Recreation for the City of Atlanta. “It’s a multipurpose park that will mitigate storm water flooding in the area. The Department of Watershed under Kishia Powell, is fully on board to partner with the Parks Department.”

Phuong said public art – in the form of the statues – will be placed in Cook Park as funding allows.

“This is another example of how when we work together, we can go further as a community,” Phuong said. “I think this is the wave of the future.” 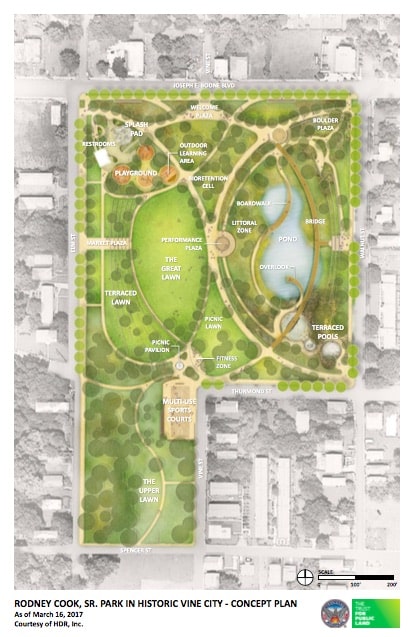