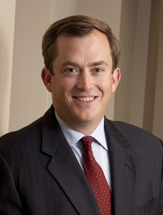 MARTA’s board of directors Monday elected Robbie Ashe, a representative from the City of Atlanta, as its new chair.

Ashe succeeds Fred Daniels, a DeKalb County representative who is an executive of Citizens Trust Bank, who served as MARTA board chair for two terms.

Ashe is an attorney with the law firm of Bondurant Mixson and Elmore who focuses on issues involving politics, governments, and governmental authorities throughout Georgia, particularly the City of Atlanta, metro Atlanta governments and the Georgia General Assembly.

His mother is Kathy Ashe, who has been a state representative from the Atlanta area who decided not seek re-election in 2012 after serving for nearly 21 years.

Robbie Ashe was appointed by Atlanta Mayor Kasim Reed and the Atlanta City Council to serve on the MARTA board. He has been serving as chair of the planning and external relations committee before being elected chairman on Monday.

Ashe went on to say that MARTA has a host of opportunities to transform the life of the organization to make sure that it is on “sound financial footing” for the foreseeable future.

Also, Ashe said he believes MARTA riders will soon start feeling the benefit of that transformation. In April, MARTA plans to increase the frequency of its rail service and improve its bus service. Ashe said that the number one complaint he gets about the agency has been the amount of time between MARTA trains.

“We’re going back to 10 minute headways,” Ashe said. “It will be really exciting.”

The MARTA board also named Noni Ellison-Southall, a representative from Fulton County, as its new vice chair.

In his final remarks as board chair, Daniel became quite emotional after thanking God, fellow board members, MARTA staff, Citizens Trust and especially his wife.

Rod Edmond, a fellow board member, thanked Daniels for his “yeoman’s type leadership” during “tumultuous times.” It was under Daniels chairmanship that MARTA had a transition in general managers — from Scott, who went on to run the Massachusetts Bay Transportation Authority in Boston, to Parker.