Cropped version for homepage: Lake levels in Northwest Georgia had fallen precipitously in the drought that closed its grip on the state over the summer. This dock on a lake near Cloudland Canyon couldn't be used in mid October to access the lake. Credit: Kelly Jordan
Share
Tweet
Share
Pin
Pocket
WhatsApp
Buffer5
Email
Reddit
5 Shares

Recent rains were too little, too late and came at the wrong time to help Georgia’s cotton and peanut farmers, but winter grains crops will benefit. The drought maps that have become so commonplace don’t specifically address weather effects on the state’s agriculture industry. 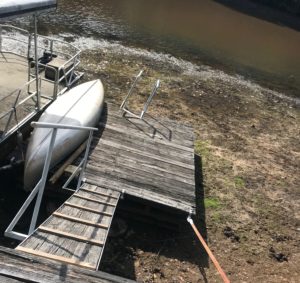 The recent rains eased drought conditions in North Georgia, where lake levels had reached considerable lows, as at this lake near Cloudland. Credit: Kelly Jordan

Jacqueline Moore didn’t have to ponder Friday when asked if the rain were of much help. Moore, the U.S. Department of Agriculture’s deputy regional director for the southern region who’s based in South Carolina’s Uplands, observed:

This isn’t to say the rains didn’t have a beneficial impact on the state’s widespread drought – they did. Precipitation estimates for the state ranged from trace amounts to 5 inches, according to a USDA report.

The proportion of the state that has no drought conditions increased from zero percent to 3.9 percent, according to the latest report by the National Drought percent Mitigation Center. Still, an estimated 80 percent of Georgia’s residents are in a drought area.

Moore’s observations regarding the effect of rains on Georgia’s agriculture industry are borne out in weekly a diary of federal reports on Georgia crop conditions. It’s part of a state-by-state report the USDA issues weekly on topics ranging from temperature and precipitation, to crop planting progress, development and harvesting. 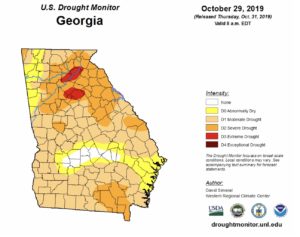 The recent rains eased drought conditions across most of Georgia, but most of North Georgia remains dry. Credit: National Drought Monitor

In Georgia’s ag world, farmers are still trying to harvest nearly half the cotton crop, half the soybean crop, 80 percent of the pecan crop and 17 percent of the peanut crop, according to the USDA’s crop report.

Here are some of the insights county extension agents provided in the latest edition of the Crop Progress and Condition Report: