The center aims to promote and support career opportunities for communities of color.

Dubbed the Propel Center, the facility is designed to support the next generation of diverse leaders providing innovative curricula, technological support, career opportunities and fellowship programs.

Tim Cook, the CEO of Apple, said the center is part of several projects that make up the company’s Racial Equity and Justice Initiative. The program’s goal is to help dismantle systemic barriers to opportunity and combat injustices faced by communities of color. 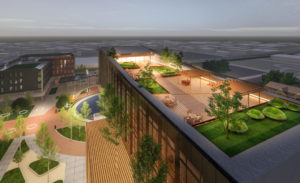 Inspired by the public calls for justice after the deaths of George Floyd and Breonna Taylor as well as the unrest caused by the local slayings of Brunswick’s Ahmaud Arbery and Rayshard Brooks in Southeast Atlanta, Cook’s goal for the initiative is to advance racial equity in education, the economy and the criminal justice system.

When interviewed by Gayle King on CBS This Morning, Cook said, “When you either experience those sort of things or read about those things and then apply them to what you’re seeing today.” He continued “there was systemic racism, there is systemic racism and it’s not going to go away unless we do something about it.”

Both Apple, and Southern Company, will invest $25 million each to build the Propel Center at the Atlanta University Center (AUC) in the heart of the West End. The presidents of the AUC, which is home to several HBCUs including Morehouse College, Clark Atlanta University and Spelman College, have expressed excitement for their students to benefit from the curriculum the Propel Center will provide including agricultural technologies, social justice, entertainment arts, app development, augmented reality and career preparation.

“Propel represents the most inclusive, game-changing and collaborative partnership that I have witnessed within my seventeen years as both college and university president,” Dr. George French, president of Clark Atlanta and chair of the Atlanta University Center Consortium Council of Presidents said in a statement.

Spelman College President, Dr. Mary Schmidt Campbell, also released a statement expressing excitement about the new resources that will be available to the college.

Morehouse’s President, Dr. David Thomas, also shared French and Schmidt Campbell’s shared enthusiasm for the Propel Center moving to the AUC. “It effectively advances our mission to prepare students as global leaders and position them in the forefront of technological innovation and community empowerment,” he said in the school’s press release. 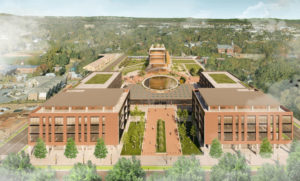 In 2018, The U.S. Equal Employment Opportunity Commission reported that African Americans make up 7.4 percent of those employed in the tech industry. With the purpose of the Propel Center to partner with HBCUs on helping students excel in this field, Apple’s vice president of Environment, Policy and Social Initiatives, Lisa Jackson, hopes to change that.

“Every individual deserves equal access to opportunity regardless of skin color or zip code,” Jackson said in a statement. To further this access, Jackson will help provide innovation grants to colleges of engineering at HBCUs like Clark Atlanta while helping students interact with Apple’s experts.

“We know more must be done,” Thomas Fanning, chairman, president and CEO of Southern Company, announced. “The establishment of the Propel Center is another important demonstration of Southern Company fulfilling our commitment to move our communities to a more equitable future.”

While there’s no definitive word yet on when or where ground will break for the new center, Saporta Report will keep you up-to-date on the latest developments.

The new PROPEL Center will be built at Clark Atlanta University