The Atlanta Regional Commission has canceled its 2020 LINK trip to Chicago because of coronavirus-related health concerns.

The LINK trips have been an annual opportunity for more than 100 metro Atlanta leaders spend three days in a major North American city to learn how other communities are addressing urban issues, such as transportation, development, regional cooperation, equity, the arts and education.

Kerry Armstrong, who chairs ARC’s board, sent an email Wednesday to “regional parthers” who had been invited and registered to go on the 2020 LINK trip to the Chicago region.

“Since that time, it has become clear to us that the public health concern and level of risk involved in such a trip are simply too great, even in August,” Armstrong wrote in the email. “Out of an abundance of caution and concern for everyone’s health, we will be canceling this year’s LINK trip. This is a difficult decision, as LINK always provides us with valuable lessons from other regions and chances to connect with colleagues.” 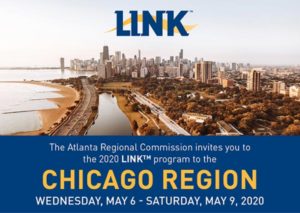 Armstrong went on to say that ARC will plan a LINK trip to the Chicago region in 2021– “most likely with an amended format.”

This is the first year since 1997 that there won’t be a LINK trip. LINK, which stands for Leadership, Innovation, Network, Knowledge, was launched to foster greater regional cooperation while having local leaders learn about best practices in other communities.

LINK already has been to Chicago once. That was in 2002 right after the election of Atlanta Mayor Shirley Franklin, who was a regular attendee on the LINK trips. In Chicago, the delegation learned how a strong urban mayor could a regional leader by building relationships with the other mayors in the region.

When Franklin returned from Chicago, she started the Metro Atlanta Mayor’s Association (MAMA), to foster closer ties with the other mayors in the region.

That is only one example of how the LINK trips have made an impact on the Atlanta region.

Here is a list of all the LINK trips plus the 20-year history (from 1997 to 2016) of the regional initiative. To read that history, click here: Link_20th_Anniversary_Book