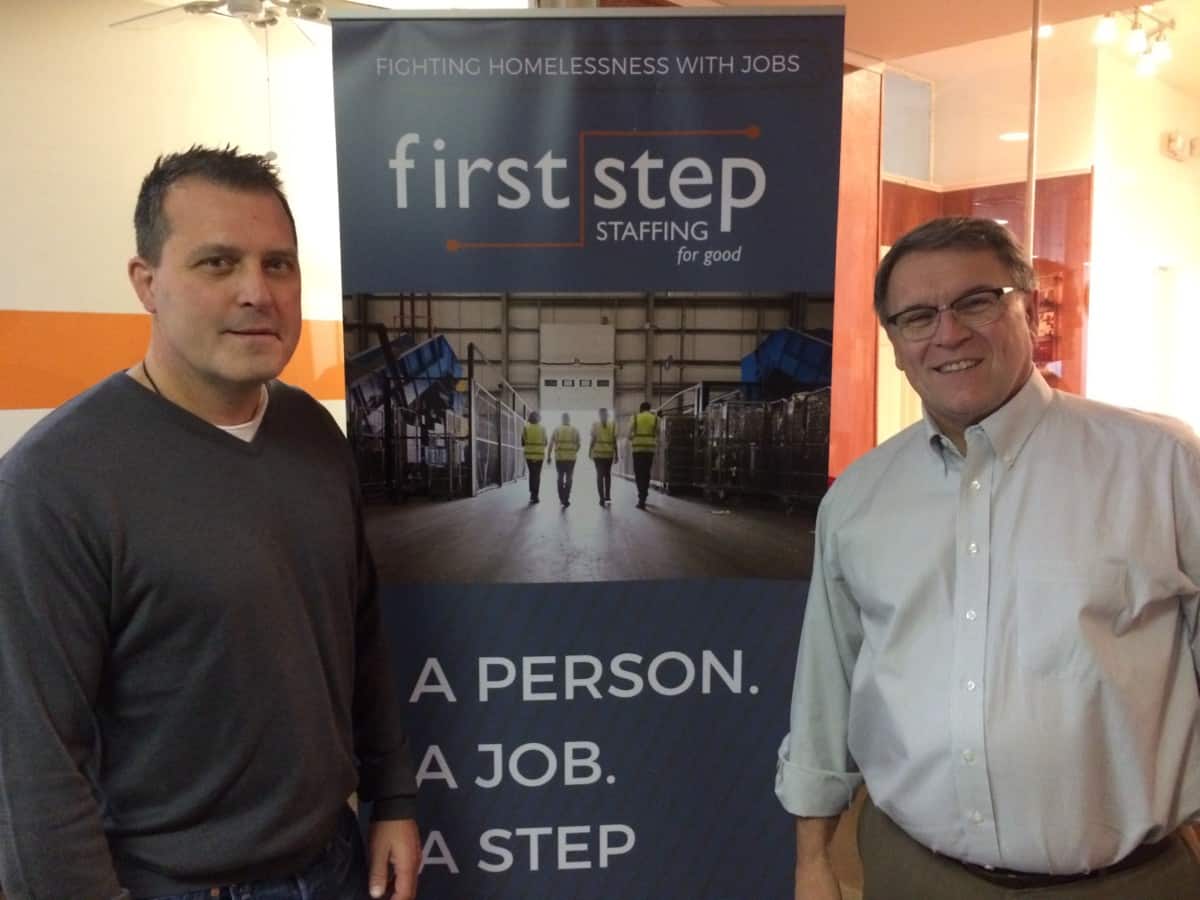 By Maria Saporta
As published in the Atlanta Business Chronicle on Dec. 16, 2016

For Greg Block, finding jobs for the homeless has become the fight of his life — literally.

Block, 50, started First Step Staffing, a nonprofit employment agency, in 2006. After a career running businesses and a four-year stint with the CIA, Block wanted to dedicate himself to making life better for the least among us.

“When I first started First Step, I wanted to figure out how can you connect homeless men and women with income and get them out of homelessness,” Block said in a recent interview. The question he sought to answer was how one could build a sustainable organization that could fund itself through business revenue.

After several years of operating First Step with only incremental growth providing about 150 jobs, Block and his board did something highly unusual. They decided to buy a much larger for-profit staffing agency and convert the operations to the nonprofit First Step. 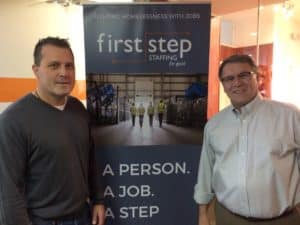 “Today we have 900 people out working and at least 500 have been recently homeless,” said Dave Shaffer, the nonprofit’s CEO who joined First Step at the time of the acquisition after working for a similar agency on the West Coast for nearly 10 years.

“It was 150 at the beginning of the year and now we’re at 500 of the recently homeless,” said Block, the founder and board chairman. “We are where we would hope we would be, but we never thought we would get there.”

On Oct. 3, 2013, Block was diagnosed with Stage 4 brain cancer. He has undergone several treatments and is now part of a clinical trial.

And his life mission has become solidifying First Step’s business model and expanding its operations to other cities. Currently, Block is considering starting a First Step satellite in Philadelphia, and he believes there is potential to start operations in Boston, New York City, Los Angeles and San Francisco.

“I needed something to do,” Block said about why First Step decided to hire an investment banker to find acquisition opportunities. “We were doing the same amount of volume we were doing seven years ago. We weren’t making the progress we wanted to organically.”

Block credits A.J. Robinson, president of Central Atlanta Progress, for helping him launch First Step and finding a way to make a difference. Robinson serves on First Step’s board.

“Staffing is great,” Block said of the business model. “There are low margins. But you can get people working very quickly. We take someone who hasn’t worked for three years and get them a job. We have zero tolerance, and we do drug tests. We do background checks. The staffing business is a great way to get felons working again.”

First Step counts on homeless service providers to send prospects their way. The nonprofit purposefully does not provide shelter or food — only jobs and related services.

“We are the first step to get people to the $10-an-hour job,” Block said. “We are high volume, low touch. We are a cog in the machine. Homeless providers give us referrals. What we do has so much impact and has so much value. It really moves the needle. We are providing a solution.”

First Step was able to finance its year-old acquisition with the help of many donors and social investors — primarily Invest Atlanta and SunTrust Banks Inc., The Cousins Foundation, The Kendeda Fund and The Nonami Foundation.

It also has been able to secure several gifts from foundations. Its list of donors reads like a Who’s Who of Atlanta philanthropy, including the Robert W. Woodruff Foundation and the Marcus Foundation. Global law firm Dentons also has been providing pro-bono legal services, which Block estimated was worth $1 million.

First Step had a five-year business plan to pay off its debt for the acquisition. After the first year, Block said the nonprofit already is meeting the goal set for the third year of operations.

“We’ve got a million dollars in the bank,” Block said. “It’s been a good year.”

First Step is not your usual employment agency. In addition to finding people jobs, it also offers transportation services from its base at the Odd Fellows Building on Auburn Avenue.

“Our ability to be a different kind of staffing company is what differentiates us,” Shaffer said. “We have 25 staff here, and then we have about five remote employees at our customers. We give 6,000 rides a month for our employees to get to work sites.”

Block said they provide 70,000 rides a year with a fleet of 10 vans. Their drivers include some of their former clients, many of whom just walk in off the street.

When people come in who are unable to work in the jobs available — either because of physical or mental disabilities — First Step has a benefits department where they work with clients to make sure they are receiving all the support available to them.

“Our benefits department has about 400 cases in the pipeline,” Shaffer said.

First Step works with dozens of companies that employ low-skilled temporary workers — jobs that are ideal for the recently homeless.

“We outperform our for-profit competitors any day of the week,” Block said, giving credit to the people First Step employs. “They want a job.”

Companies also have embraced First Step’s mission. “People want to help,” Block said. “I can do something good — give our customers a chance to give back with very little effort. We take all the risks. We have more jobs than we can fill right now.”

Block estimates that Atlanta currently has about 7,000 homeless people, and that about half of those are able to work. He would love to be able to more than double the number of homeless people First Step currently serves.

“Our employees — what people might say is our greatest vulnerability — is actually our greatest strength,” said Block, who believes in treating everyone with respect and dignity. “Our employees are pretty motivated. No one will give them a chance. These folks are highly motivated. We are a missing link, a bridge.”