It’s a new day for the City of Atlanta.

The two of 14 mayoral candidates to advance to the Nov. 30 run-off will be Felicia Moore, president of the Atlanta City Council, and Andre Dickens, an at-large city councilman. Moore garnered 41 percent of the vote, and Dickens managed to edge out former Atlanta Mayor Kasim Reed for that second run-off spot by only 612 votes.

In other words, the “Kasim cloud” over Atlanta has lifted. The city can now begin to enjoy a new spirit of leadership at Atlanta’s City Hall no matter who wins.

Take what Dickens said after he found out he was in the run-off about his mayoral opponent. 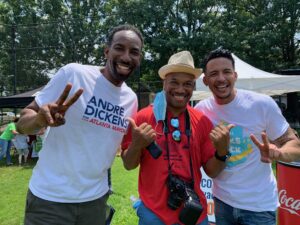 During the campaign, Andre Dickens is with environmentalist Bruce Morton and fellow mayoral candidate Antonio Brown (Photo by Kelly Jordan)

“Council President Moore and I are colleagues,” Dickens said during an 11Alive interview. “We are actually friends. We respect one another. And now we are going to go down to fight to become the mayor of Atlanta.”

Because they are colleagues who respect each other, perhaps we will end up with a civil run-off campaign — one where Moore and Dickens will discuss and debate the issues without attacking each other personally. How refreshing would that be?

During the general election campaign — when most Atlanta media was focused on Reed as the front-runner and Moore as his top opponent, there was an underground campaign for “Anybody but Kasim.” The multi-pronged effort included several different groups who used social media, texts, billboards and mailers to spread the message.

In other words, the true winner on election day was “Anybody but Kasim.”

Actually, former Atlanta Mayor Shirley Franklin told me more than two months ago that Reed would not be in the run-off. But that certainly wasn’t the prevailing expectation.

So on Wednesday morning, several people who had been targets of Reed while he was in office were thrilled with the outcome. One even declared that Atlanta had won two World Series on Tuesday night — the mayoral election and the Atlanta Braves decisive victory over the Houston Astros in Game 6. 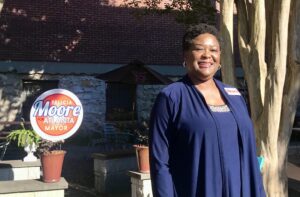 During the campaign, Felicia Moore meets with voters and supporters at the Georgia Beer Garden in late September (Photo by Maria Saporta)

But now voters will need to pick either Moore or Dickens.

“This is the most delightful political quandary I have ever been in,” said Ceasar Mitchell, the former president of the Atlanta City Council who was an unsuccessful mayoral candidate in 2017, losing to Reed’s choice — Keisha Lance Bottoms, who decided earlier this year to not run for re-election.

“As I see it, Atlanta voters will have an unexpected dilemma on who to choose as their next mayor,” continued Mitchell, who often was a Reed target. “The good, the bad and the ugly. The good is that two fine public servants and two people whom I personally like are in the run-off. The bad is that only one can win. And the ugly is that sucks.”

Mitchell ended by saying: “No matter what, things are looking brighter at City Hall.”

Another one of Reed’s targets — Egbert Perry — shared a similar message.

“While Atlanta faces challenges, it’s full of promise,” said Perry, who is chairman and CEO of the Integral Group. “Voters asked themselves whether they’re ready to move into the future or to dwell in the past; they chose the future. As Atlantans, it’s our responsibility to select a new mayor and to work with that mayor to courageously face the challenges and to build on the promises.”

It reminded me of one of the most significant executive pacts in American business. Back in the late 1970s, there was fierce competition for the new CEO of Atlanta-based Coca-Cola Co. Two of the top contenders — Roberto Goizueta and Donald Keough — made a pact. No matter who became CEO, the other one would be part of the team.

That’s how it played out. Goizueta was named CEO, and Keough became president — and they formed one of the strongest leadership combos in corporate America.

Could Moore and Dickens make a similar pact?

Former Atlanta Mayor Andrew Young, who endorsed Reed, is now supporting Dickens. But he’s open to working with whoever ends up being elected mayor. 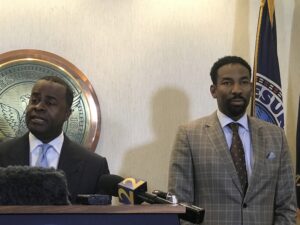 “I’d like to see Andre win,” Young said in an interview Sunday night. “I would work with Felicia too, but only if she wanted me to. I will work with whoever wins. I don’t have any bad feelings towards anybody.”

Young said Reed lost because of the “formidable campaign” against him — the ABK movement.

“I never imagined the depth of the opposition,” said Young, who admitted he had “disagreed with a number of things” Reed did when he was mayor. But Young explained he had supported him since they first met when Reed was a student at Howard University.

Now that Reed and Bottoms are exiting stage left, Atlanta has an opportunity to heal the divides that exist in our city. Most importantly will be reuniting the schism that exists in Buckhead, where there is a dangerous initiative to de-annex the wealthiest section of the city from its core.

A civil relationship between Moore and Dickens during the campaign would help unite Atlanta. Moore won decisively in north Atlanta and Buckhead, and Dickens received strong support in parts of south and west Atlanta, as the following interactive map shows.

No matter who wins on Nov. 30, it will be a new day for Atlanta.

Note to readers: Given my rocky history with former Atlanta Mayor Kasim Reed, I decided to not cover the mayor’s race during the general election. I had intended to interview the top candidates for mayor, including Reed. Eventually, I realized there was no way I could be objective and write a neutral piece on the former mayor. It was difficult to be on the sidelines, but it was the only way I could be fair. Because I respect both Moore and Dickens, I look forward to covering the run-off campaign and the next mayoral administration.