This past Saturday I woke up at what most folks in their 20s would deem an ungodly hour to make my way to the suburbs of Cobb County for my first bicycle ride on the Silver Comet Trail.

The first three miles consisted of me attempting to stay on the bike and in the lane while not swerving into mothers pushing strollers and girlfriends catching up over an early morning workout.

Nonetheless, the experience and the scenery was a perfect start to bicycle-centric weekend. During the three hours on the trails, nearly every passersby waved or acknowledged their fellow pedestrians and cyclists enjoying the brisk fall air.

The following day, I experienced that same communal vibe as I joined hundreds of metro Atlantans who walked, cycled and skateboarded up and down the streets of Inman Park for the fall installment of Atlanta Streets Alive, a program of the Atlanta Bicycle Coalition.

Bicycle organizations in metro Atlanta, and across the state, have made tremendous strides over the past few decades to ensure safe cycling, whether for exercise or as an alternative mode of transportation. 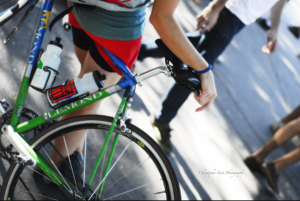 Also at the state level, Gov. Nathan Deal decided this year to continue Georgia’s participation in the Recreational Trails Program. According to the Georgia Department of Natural Resources, monies from the program will fund nearly $2 million in trail grants to local communities across the state.

Universities have also done their part to provide for and encourage cycling as a viable transportation choice for students and faculty. Georgia State University, Emory University and Georgia Tech all have bicycle parking in front of classroom buildings and dormitories.

Later this week, the City of Atlanta will join Georgia Tech, the Atlanta Bicycle Coalition and the Midtown Alliance for a ribbon cutting to celebrate the opening of bicycle lanes at Fifth Street and West Peachtree, the intersection connecting the university to Midtown.

Following the press conference, advocates and speakers will jump on viaCycle bicycles and pedal to City Hall to kick off the first Cycle Atlanta expo. Rumor has it that Atlanta Mayor Kasim Reed might stride into the building bicycle helmet in hand.

These varied programs and initiatives continue to raise the education level of elected officials and aggressive drivers on the need to adapt our roads and lifestyles to accommodate alternative modes of transportation.

Getting out of the four corners of the vehicle and into the physical elements of our surroundings is essential to the health and strengthening of our communities.