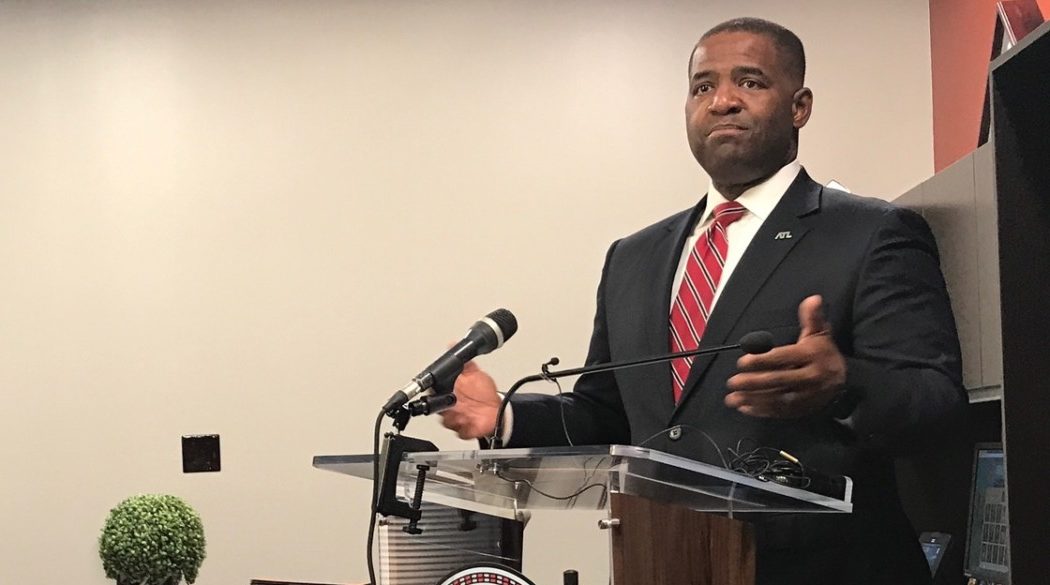 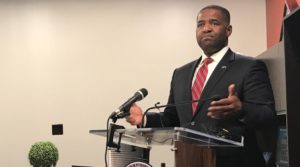 Atlanta City Council President Ceasar Mitchell, pictured in his City Hall office defending his proposal for a moratorium on contracts that begin service in 2018 against heated criticism from Mayor Kasim Reed. (Photo by Maria Saporta)

Mitchell, who is running for mayor, has been spotlighting this issue of city contracts for the past several weeks, raising the ire of current Mayor Kasim Reed.

Here is Mitchell’s statement in full:

The indictment of the former Chief Procurement Officer for bribery in the ongoing federal investigation into City Hall is very distressing and serious.  This is one of the biggest corruption scandals in our city’s history with no end in sight.  Indeed, it appears there is a culture of corruption.  In order to prevent a crisis in our government, the City Council must take the lead on reforming the procurement process and restoring trust and transparency in city government.

Additionally, we must also take the following actions:

1.  The Council and Administration need to conduct a full-scale independent audit of the procurement process and act with urgency on its findings.

2.  The Council and Administration must pass legislation to require all procurements and contracts be online for the public to view.

While the city’s procurement process is not within my purview as Council President, I am committed to doing my part to begin a new chapter in City Hall. I urge anyone – city employees or citizens – with information regarding corruption to notify the proper legal authorities immediately.  I also urge the Administration to cooperate fully with federal investigators and be as transparent as possible with the public and the press.

As Mayor, I will strengthen our ethics code and bring greater transparency to City Hall. I will set the example.  There will be no room in my Administration for any illegal or unethical conduct.  Even the appearance of unethical conduct will not be tolerated.

I am determined to take any steps necessary to restore trust and transparency.  And to have a government that is as good as its people.  That is my pledge to the people of Atlanta.