Despite having agreed to placing a “Comfort Women” memorial in early February, the Center for Civil and Human Rights announced on March 2 that it was backing off the memorial.

Varying reasons were given for the Center’s change of heart, including the fact that the institution did not have a policy to place memorials on its grounds.

But a story that appeared in last Friday’s Atlanta Business Chronicle revealed that the statue had set off international tensions in the local community – specifically pressure by the Japanese Consulate urging the Center not to install the memorial.

“We’re deeply disappointed to hear the Center is backing out of our written Agreement and work we’ve been engaging them in for 6 months now,” said Baik Kyu Kim, chairman of the Atlanta Comfort Women Task Force, in a release after receiving a letter from the Center reversing their stance. ““We did all this in good faith and belief in the integrity of the Center board and staff.  If there really was a policy that existed, why are they telling us now?”

Former Atlanta Mayor Shirley Franklin, who chairs the Center’s board, and Derrek Kayongo, its president and CEO, signed the letter that also stated that they would seek to “find ways to collaborate with the South Korean Task Force (sic) to highlight the tragic experience of the Comfort Women that will be meaningful and impactful to Center visitors.”

(The name of the Task Force is actually the Atlanta Comfort Women Task Force).

An estimated 200,000 women and girls from 13 Asian-Pacific nations were trafficked and sexually enslaved during World War II (known as the ‘comfort women’) by the Imperial Armed Forces of Japan from 1932 to 1945. Most of the women and girls were Korean.

The purpose of the memorial was to pay homage to that history as well as raise awareness on the ongoing problems of sexual and human trafficking going on in our city and the world today.

After the public announcement of the memorial, the Task Force found out that the Japanese Consul General in Atlanta began meeting with leaders at the Metro-Atlanta Chamber of Commerce, the Center, and City of Atlanta, among many others to express concerns and threaten Japanese business fall-out from erecting this Memorial, according to Helen Kim Ho, a consultant and special advisor to the Task Force. 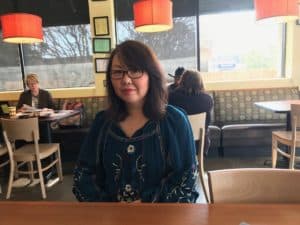 Helen Kim Ho, an advisor to the Atlanta Comfort Women Task Force, during an interview before learning of the Center for Civil and Human Rights reversal on the memorial (Photo by Maria Saporta)

“The Task Force was never contacted or notified of this anti-Memorial campaign effort and found out third-hand a week and a half after it began, so it’s hard to believe their decision is policy-based,” Ho said in a statement. “Part of the tragedy of the comfort woman story is that there has never been full governmental acknowledgement, apology and reparations that United Nations rapporteurs, human rights tribunals, our U.S. House of Representatives and other political bodies have universally demanded for decades. With continued efforts to silence and dismiss this history, it’s another trauma.”

Ho went on to say that “Likewise, the Center failed to alert us and invite us to help share information when this anti-Memorial campaign occurred.  This felt sadly familiar to the systematic efforts to silence and ignore the truth and power of these women and girls we are seeking to honor.”

The Japanese Consulate did issue a statement from Yasukata Fukahori, the deputy consul general in Atlanta. Here is the statement in full:

The Government of Japan recognizes that this is an issue in which the honor and dignity of many women were at stake. Japan has taken various measures from a moral standpoint, notwithstanding the fact that the issues of claims by individuals, including those of former comfort women, were legally settled in an agreement between Japan and the Republic of Korea when they normalized their relationship in 1965. The Asian Women’s Fund, established in 1995 by the people and the Government of Japan, was one of those measures. Most recently, the Government of Japan reached with the Government of the Republic of Korea an agreement over the issue in December 2015, which confirmed the comfort women issue is resolved finally and irreversibly. The Government of Japan honors the agreement and has implemented it in a very faithful manner, regardless of whatever happens in the Republic of Korea. The contribution of 1 billion yen to the foundation established based on the agreement clearly shows Japan’s commitment to implementing the agreement. It should also be noted that the majority of the survivors of former comfort women at the time of the agreement endorsed and appreciated the agreement and received support provided by the foundation.
The problem of the statue does not end there. The Government of Japan is seriously concerned that the statue in Atlanta may cause discrimination, humiliation or bullying against members of the Japanese community in Atlanta who wish to live in peace. The Government of Japan must not allow the situation where Japanese residents overseas are discriminated or their safe and secure lives are threatened. The Consulate-General of Japan does not understand why, under such circumstances, a project of erection of a comfort woman statue in Atlanta, which will lead to divisiveness among communities, came to be considered, and sincerely hopes that this will not take place in the great city of Dr. Martin Luther King Jr., a city of peace, tolerance and inclusiveness.

Meanwhile, the Task Force is determined to find an Atlanta home for the Comfort Women memorial.

It has already commissioned the statue, and the Task Force is nearing its fund-raising goal.

“We are confident we will find a site deserving of this beautiful statue and memorial honoring the brave lives of girls and women who were forced into one of the largest known sexual and human trafficking rings in the 20th century,” Task Force Chair Baik Kyu Kim said in the statement. “We have almost reached our original fundraising goal and will simply redouble all our efforts. We would dishonor the spirit and history of these women if we didn’t keep moving forward at this time.” 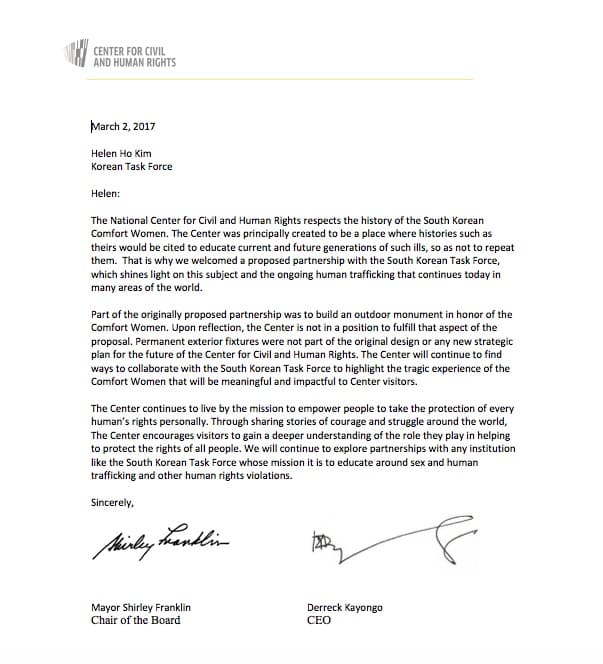