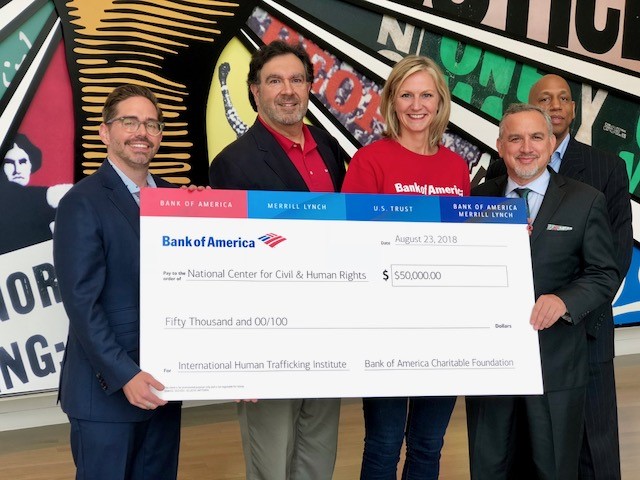 By Maria Saporta
As published in the Atlanta Business Chronicle on Aug. 31, 2018

On Aug. 23, Bank of America Corp. (NYSE: BAC) made 19 local nonprofits quite happy when representatives visited the various organizations. 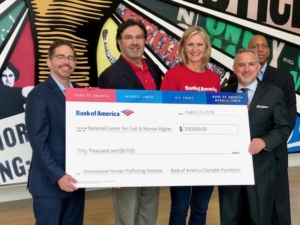 Bank of America’s Wendy Stewart provides a super-sized check of $50,000 to the Center for Civil and Human Rights (Special: Bank of America)

Five of the stops included Bank of America handing over five supersized checks to the nonprofits. It was Bank of America’s third annual Giving Spree, and the bank has donated $2.76 million in grants to 38 nonprofits.

Grace Jackson has been hired as the new executive director of Year Up Greater Atlanta. The nonprofit, which provides a workforce development program, also is celebrating its 10 year anniversary operating in the Atlanta region. Jackson has more than 20 years of senior leadership experience in the financial services industry. She Jackson previously served as the chief operating and strategy officer for Raymond James Bank.

“Grace’s extensive expertise in collaborating with C-suite executives and in developing strategy and leading initiatives will allow us to continue growing Year Up Greater Atlanta through new corporate partnerships and skills training aligned with companies’ talent needs,” said Gerald Chertavian, Year Up Founder and CEO. “She is committed to closing the opportunity divide for young adults across Atlanta, and to scaling Year Up’s impact and reach across the metropolitan area to serve 400 young adults through the end of 2018.”

Year Up Greater Atlanta provides free job training to talented and motivated young adults, ages 18-24, who don’t have college degrees. It has campuses in Midtown and at the Atlanta Technical College. Students gain in-demand technical and professional skills in the first six months, then participate in a six-month internship at a top local company.

In June, the federally-sponsored Pathways for Advancing Careers and Education (PACE) evaluation of Year Up showed a 53 percent increase in initial earnings for young adults randomly assigned to Year Up compared with similar young adults in a control group – the largest impact on earnings reported to date for a workforce program tested in a randomized controlled trial.

“Since 2009, Year Up Greater Atlanta interns and graduates have redefined what talent looks like—and where it comes from,” Jackson said in a statement. “As executive director, I’m excited to build on their success and help even more underserved young adults reach their full potential.”

Prior to Raymond James Bank, Jackson served as the Credit Advisory Service Executive for a 130-plus organization within SunTrust Bank. She also has held a position with Wells Fargo before joining SunTrust.

Jackson has a Bachelor of Science degree in Comprehensive Marketing from Illinois State University and a Masters of Business Administration degree in finance from the Katz Graduate School of Business from the University of Pittsburgh.

The East Lake Foundation has elected three new board members: Onome Okuma, Sara Prince and Mark Rahiya. “Their diverse expertise will help sustain our progress in East Lake and ensure that we work collaboratively with our other Atlanta-based Purpose Built Communities’ partner organizations over the next few years, ” said Danny J. Shoy, Jr, president and CEO of the East Lake Foundation.

Okuma is vice president of customer technology and insights for Chick-fil-A. Prince is a partner with McKinsey & Co.’s Atlanta office. Rahiya is chief retail sales officer and senior vice president of USA operations for The Coca-Cola Co.

It is also celebrating 130 years of providing high-quality early education and care. Co-chairs for this year’s Celebration Dinner are Mark Dvorak, Sheltering Arms board member and executive vice president of Golin; and Naiema Frieson, co-founder of Tiny Sports Academy.

Bank of America and other groups are providing support to Grady Hospital
Maria Saporta April 8, 2020 4:03 pm