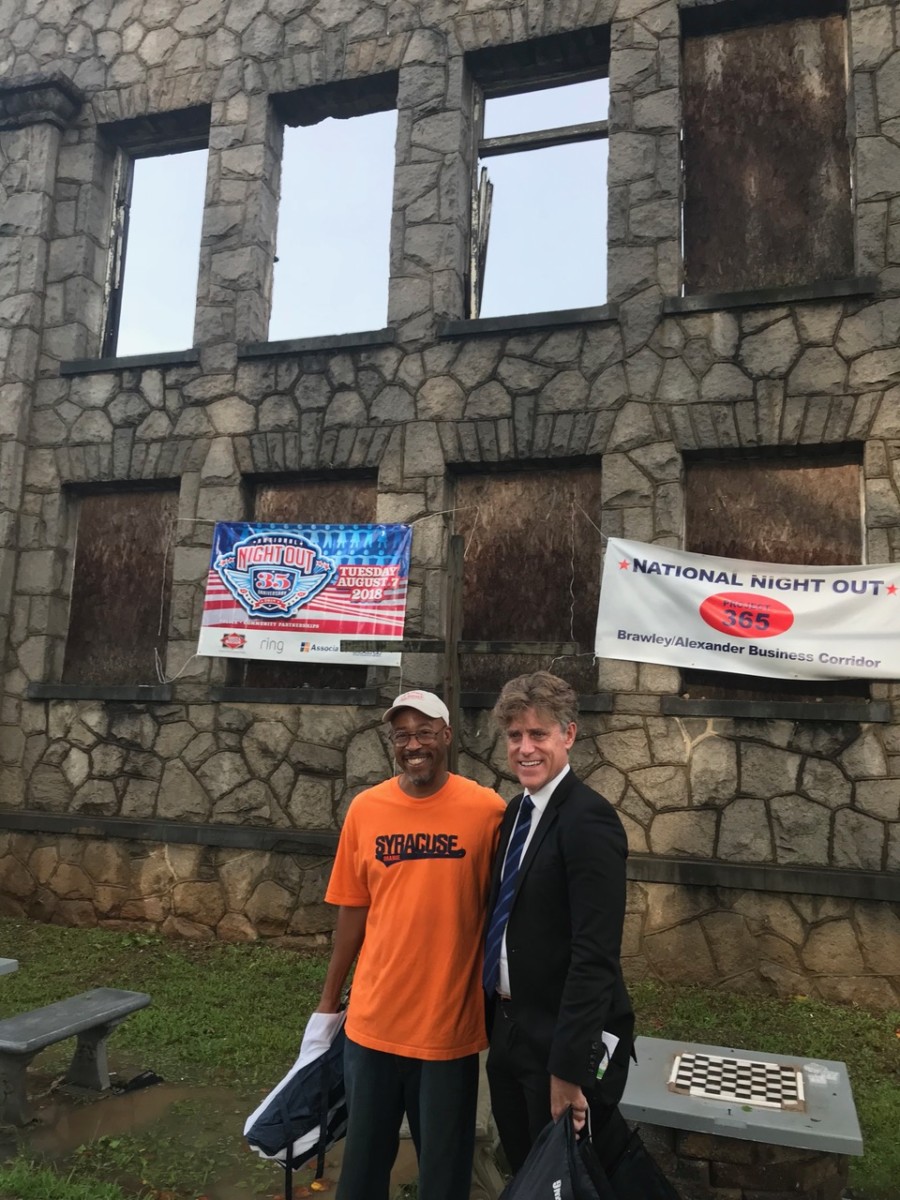 Rev. Winston Taylor and Tim Keane stand in front of the hollow-out St. Marks Church at the corner of Brawley and Alexander in English Avenue (Photo by Maria Saporta)

By Maria Saporta
As published in the Atlanta Business Chronicle on Aug. 10, 2018

A grassroots partnership launched a year-long campaign Aug. 7 to revitalize a Westside business district in the heart of English Avenue. 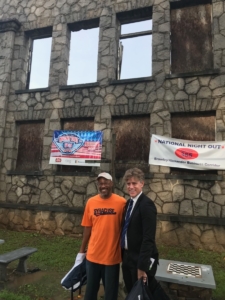 Rev. Winston Taylor and Tim Keane stand in front of the hollow-out St. Marks Church at the corner of Brawley and Alexander in English Avenue (Photo by Maria Saporta)

The launch of Project 365 was part of the National Night Out, when about a dozen community partners and a strong gathering of community residents gathered in the rain to endorse the recommendations of the Westside Land Use Framework Plan to bring new life to the business district at the intersection of James P. Brawley Dr. N.W. and Cameron Alexander Boulevard N.W.

The 365 Campaign will include numerous projects that will be implemented by public and private partners over the next 365 days, ending on Aug. 6, 2019. 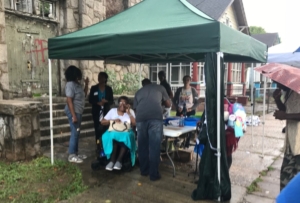 Mother Moore, sitting in a wheelchair and under shelter from the rain, coordinated the 365 Project and brought together the group of community partners.

Rev. Winston Taylor stood in front of the former St. Mark’s A.M.E. Church – a building with no roof above its still-standing stone walls. Taylor and community leaders hope to restore the historic church and turn it into a cultural gathering center.

Mother Moore said it’s important for the community to stand behind the Westside Land Use Framework Plan, a message that was reinforced by urban planner Dhiru Thadani, who worked with the Westside Future Fund to develop the plan.

City of Atlanta Planning Commissioner Tim Keane, who came to the Aug. 7 launch event, said the commercial district of Brawley and Alexander is one of the city’s districts most in need of revitalization.

The NFL Foundation and the Atlanta Falcons have a made a $250,000 grant to the Salvation Army of Metro Atlanta to install a new synthetic turf football field at the Bellwood Boys and Girls Club in the English Avenue community.

The official commemoration event for the field will be held on Aug. 18. More than 100 children from metro Atlanta will gather to celebrate the completed installation at the Bellwood Club at 777 Donald Lee Hollowell Parkway N.E.

The gift is being made through the National Football League Foundation Grassroots Program in partnership with the Local Initiatives Support Corp. It is part of more than $3 million that have been allocated this year to refurbish fields. The NFL Grassroots partnership has committed nearly $46 million to the program since 1998, supporting 336 projects nationwide.

The Bellwood Club project fits with the goals of Atlanta Falcons owner Arthur Blank and his executive team to revitalize the neighborhood on Atlanta’s Westside.

“For the past four years, our club and the entire Blank family of businesses have invested in the people and communities of Atlanta’s historic Westside neighborhoods; some of the most underserved in our city,” Rich McKay, president and CEO of the Atlanta Falcons, said in a statement. “The NFL Grassroots Field does more for the youth living in these neighborhoods than just constructing a field – it allows them to dream bigger, commit to each other, and build a better future for themselves and their families.”

The people who are expected to participate in the dedication are McKay; Penny McPhee, president of the Arthur M. Blank Family Foundation; Major Bob Parker, area commander of the Salvation Army of Metro Atlanta; and Beverly Smith, senior program director of Local Initiatives Support Corp. 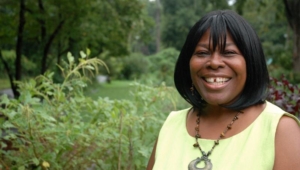 “Carol has demonstrated outstanding leadership within the organization and the community,” said Nuri, who announced his retirement earlier this year. “She has a passion for service and she can deliver on results.”

Hunter will lead of a diverse team that includes growers and educators with the unique skills of building community through urban agriculture. She has served as Truly Living Well’s chief administrative officer since 2011.

Hunter joined the Truly Living Well Team after a successful career in broadcast media. She is a graduate of Hampton University, and she was named a 2018 Center for Civic Innovation Food Fellow.

“Carol has the vision to lead Truly Living Well to its next level,” said Chuck Meadows, who chairs the board of the nonprofit. “Truly Living Well has a strong foundation, and Carol will continue to build the programs and services, rising to meet new challenges in the communities that we serve.”

Truly Living Well was established in 2006 to use food production as a tool to bridge culture, health and wellness. Programs and activities include urban agriculture training, nutrition, education and job creation. Truly Living Well grows better communities through sustainable and economically viable solutions to help people to eat and live better.

Jennifer Sherer, vice president of innovation and entrepreneurship at the Metro Atlanta Chamber, has been appointed director of the Entrepreneurship & Innovation Institute at Georgia State University’s J. Mack Robinson College of Business. 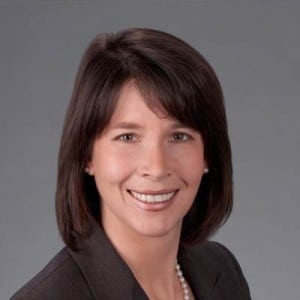 During her tenure at the Metro Atlanta Chamber, Sherer led numerous initiatives to drive collaboration in the innovation community, support entrepreneurs and elevate Atlanta’s status as a globally recognized innovation hub.

Prior to joining the Chamber, Sherer was executive director of Southeast Bio, a regional organization that fosters the growth of life science industries in the Southeast.

“Jennifer is excited to cultivate an inclusive entrepreneurial culture across the university, and she possesses the leadership acumen to do so,” said Richard Phillips, dean of the Robinson College. “This skill, combined with her network of relationships across Atlanta and the Southeastern United States, will accelerate our ability to integrate ENI into the region’s entrepreneurship and innovation ecosystem and will greatly enhance opportunities for our students and our impact as a major urban research university.”

Sherer holds a doctorate in molecular physiology and biological physics from the University of Virginia. She succeeds Richard Welke, ENI’s inaugural director, who retired earlier this summer. She will start on Aug. 15.