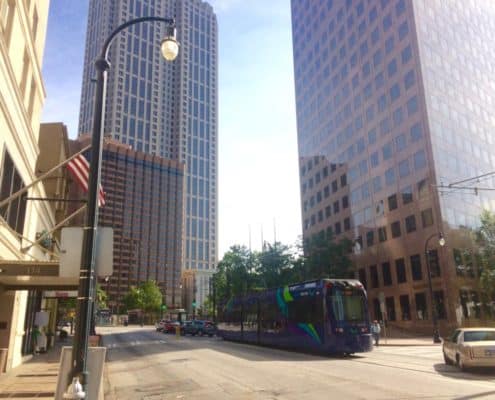 The city of Atlanta and MARTA are planning major transportation investments in two separate sales tax referendums that will go before voters in November.

If approved, both taxes would generate hundreds of millions of dollars a year for a myriad of improvements including expanded streetcar or light rail lines, improved bus services, new multi-use trails and road upgrades into complete streets.

But one project missing from the plans is for a Peachtree streetcar.

The city of Atlanta has had a rocky experience with reintroduction of the streetcar.

Some question why the new streetcar followed an east-west tourist route from Centennial Olympic Park to the King Center.

The project was envisioned to be part of a larger system that would have had a streetcar going up and down Peachtree Street from downtown to Buckhead.

When the city was not awarded federal funds to build the entire system, it had to build the east-west loop first for the streetcar maintenance facility located under the Downtown Connector.

The assumption was the Peachtree streetcar would be next – connecting the main activity centers in the city.

The most recent transportation plans show all kinds of lines for light rail in the city. But the Peachtree streetcar is not one of them.

How shortsighted. One of the biggest jabs against the existing Atlanta streetcar is that few people ride it – especially since the city began charging a $1 fare.

By comparison, a Peachtree Streetcar would generate more riders than any other route in the city because of the existing developments. While part of the route parallels the MARTA rail line, the two transit systems would serve different functions.

The heavy rail carries people on longer trips at a rapid speed. The streetcar would serve people going shorter distances who want to jump on and off to go to shops, restaurants, clubs, offices, hotels, condos and apartments along the corridor.

There also are stretches of Peachtree without rail transit – from the Arts Center MARTA Station to the Buckhead MARTA Station, a route that includes Piedmont Hospital and Peachtree Battle.

The good news? These plans are not carved in stone. As Atlanta grows, people who are now skeptical of a Peachtree streetcar will be begging for a better way to move up and down our signature street.