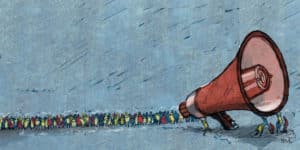 As part of France-Atlanta, an exhibition and program is being presented called “Cartooning for Peace: The of Art of Democracy.” Three world-renowned press cartoonists participated in the program – Jean “Plantu” Plantureux with Le Monde, France, Michel Kichka with Courrier International who is based in Israel, and our own Mike Luckovich with the Atlanta Journal-Constitution.

Ten years ago, Cartooning for Peace was born. Plantu of Le Monde worked with then U.N. Secretary General Kofi Annan on a seminar called “Unlearning Intolerance.” It included 12 famous editorial cartoonists from around the world.

And this October, Cartooning for Peace brought together Plantu, Luckovich and Kichka.

They helped kick off an outdoor exhibit of Cartooning for Peace cartoonists, part of the Atlanta arts initiative – ELEVATE.

Louis de Corail, the consul general of France in Atlanta, welcomed the cartoonists for lunch at his residence where the conversation centered around the presidential election and the amount of political unrest in the world today.

At one point, Luckovich asked Plantu if he had known the cartoonists who worked for the Charlie Hebdo newspaper who were gunned down by radical extremists. 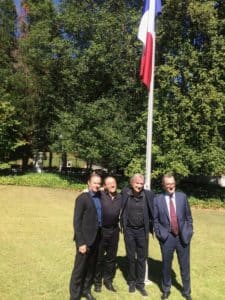 Cartooning for Peace: Mike Luckovich with the Atlanta Journal-Constitution.Michel Kichka with Courrier International who is based in Israel, Jean “Plantu” Plantureux with Le Monde with French Consul General in Atlanta – Louis de Corail (Photo by Maria Saporta)

Plantu bowed his head calmly naming all his friends who were killed that day.

Cartooning for Peace is the antidote of such events. More than 140 cartoonists are bridging international barriers to find engaging and provocative ways to promote free speech in a democratic society.

Political cartoons create a valuable space for dialogue, reflection and tolerance by using humor, satire and irony to evoke thought and freedom of expression.

The cartoonists had just met with students of the Atlanta Public Schools and Georgia Tech, and they were impressed by how engaged they were in current affairs, including the U.S. presidential race.

At one point, Luckovich said he has an easier job when he disagrees with a president, saying it was harder to make fun of Barack Obama than of George W. Bush. But then Luckovich added, he would rather have a good president than an easy job.