Students at Emory’s Goizueta Business School developed their own scenarios for what U.S. healthcare might look like in 2040 at the school’s Healthcare Association Futuring competition.

Imagine a world where the possibility of bacterial infections makes surgery insanely risky. According to research presented by Team Apocalypse, one of six teams to participate in the Healthcare Futuring Competition 2040 held earlier this year, a world where antibiotics no longer work is less than two decades away.

“By 2040 we will have run out of effective antibiotics due to antibiotic-resistant organisms,” explained first-place Team Apocalypse’s Vikram Varadarajan. 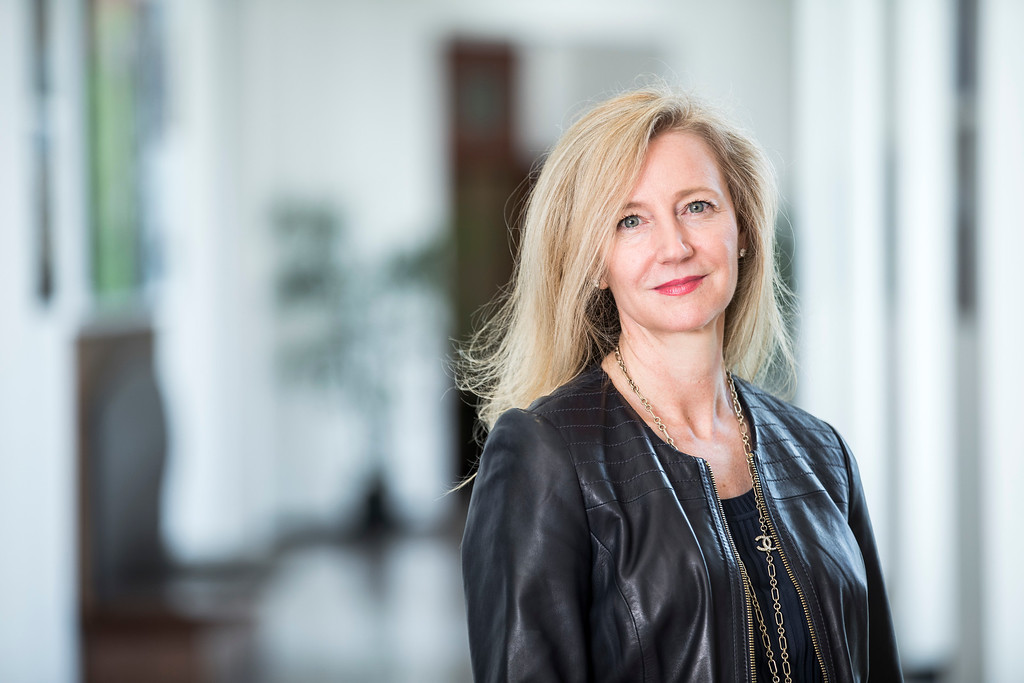 Renee Dye, an associate professor at Emory’s Goizueta Business, sees the competition is a chance for students to use analytic capabilities and creativity to imagine the future of health care

Organized by the Goizueta Healthcare Association’s vice president of conferences and competitions, Humza Mirza, in association with Renee Dye, associate professor in the practice of organization and management, the competition tasked students with developing scenarios of what the U.S. health care system might look like in 2040.

Students from Goizueta Business School, Emory School of Medicine, Emory College of Arts and Sciences, Rollins School of Public Health and James T. Laney School of Graduate Studies were among the Emory schools represented in the competition. The top three teams took home a total of $5,000 in prize money.

Dye sees the competition as a way to use “not only analytic capabilities but the creativity that you don’t always get a chance to exercise in graduate courses of study,” she explained during the competition, which was held at Goizueta Business School. “I love the way that this [competition] brings them together.”

What challenges will our health care future hold? 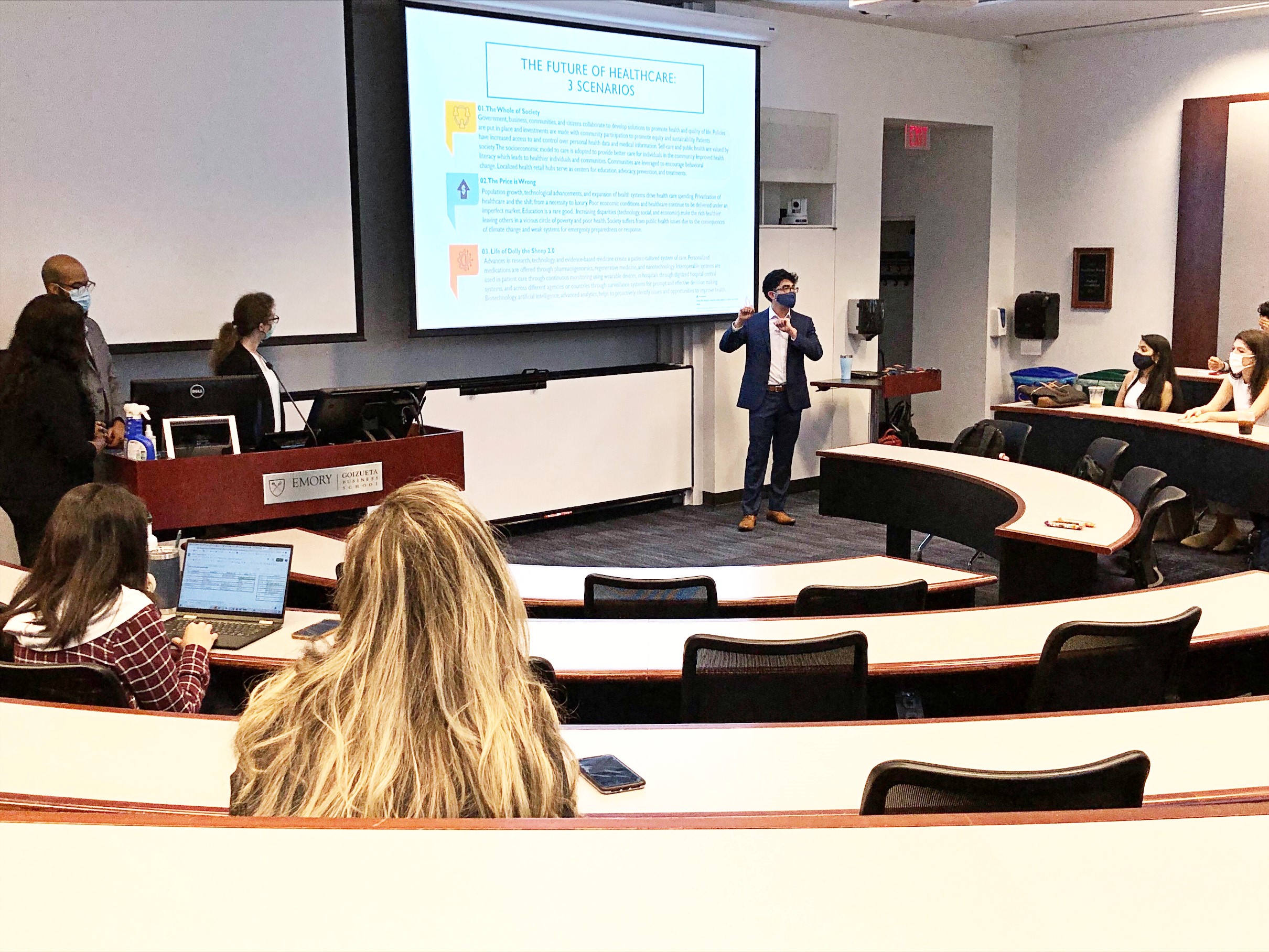 Teams of two to five students at Goizueta’s Healthcare Futuring Competition shared their predictions with a judging panel, consisting of leading thinkers and practitioners from the healthcare field.

In the future described by Team Apocalypse, antibiotics, commonly given to patients after surgeries to ward off infection, no longer work. If the risk of infection from antimicrobial-resistant organisms outweighs the benefits of most surgeries, they contend that surgeries — especially elective ones — will decrease dramatically.

Since surgeries makes up about half of hospital revenue, without innovations that stave off bacterial infections, by 2040, elective surgeries will take place far less often and hospital profits will suffer a serious blow, Team Apocalypse predicted.

An aging population and an increased minority population will make matters worse due to increased disease susceptibility. The team painted a bleak backdrop where a combination of factors would lead to a reduction in the workforce and an annual loss in global economic productivity of $70 trillion by 2040.

On a brighter note, Team Apocalypse’s scenario did include areas of innovation that might ward off catastrophe: RNA vaccine development, the use of CRISPR technology to boost individuals’ immune systems and preventative therapies. For a future scenario the judges deemed all too plausible, Team Apocalypse took home first place and $3,000.

The benefits of diverse teams

Allegra Porter, a member of the Emory United team, participated not only because she is pursuing a career in health care, but because she wanted to work with students from other graduate programs.

“My teammates’ approach to the issue added new depth to my views and highlighted things that I hadn’t considered before — things that we don’t necessarily learn in business school,” Porter says. “Something that has become clear to me throughout my time in the program is how critical diversity is in a team. Not only of opinion, but of background, culture and expertise.”

The presentations that most resonated with the judges “articulated a single vision of the future that was based in plausible trend analysis but that didn’t spend so much time fixated on the trends themselves that it failed to develop the narrative of the future,” explains Dye. The judges were impressed by those teams with a strong point of view “about a simple way that the world is going to evolve,” she adds, and teams that were “willing to stack the deck behind it.”

Kim teaches a health care strategy class at Goizueta and is acutely aware of how fragmented, complex, inefficient and fluid U.S. health care is.

“It’s helpful to think over the long-range future to imagine what health care could look like — for better and worse,” Kim says. “Thinking big gives us permission to look past tactics and discuss national health care strategy.”

Second place and $1,500 went to Team CAS for its scenario that predicted a more robust preventative health care system. Comprised of three current Emory medical students, Team CAS noted that 94% of medical residents feel it is their duty to counsel patients on nutrition and lifestyle issues, but only 14% of those same residents feel they are equipped to do so. The team predicted that between now and 2040, the American Association of Medical Colleges would recognize this shortcoming and mandate lifestyle medicine courses in its core curriculum.

Team REP Healthcare, comprised of masters of public health candidates at Rollins School of Public Health, took home third place and $500 for its scenario in which health care delivery models see major improvements due to lessons learned from the pandemic. In addition to predicting an exponential rise in telemedicine services, the team foresaw a future affected by hospital consolidation — and the subsequent lack of competition and increased prices — as well as an increase in patient treatment options outside of the hospital setting.

During its presentation, the team also predicted a hefty contribution from technology and data — including the use of artificial intelligence for drug delivery and diagnosis as well as the adoption of Blockchain technology to secure transactions. 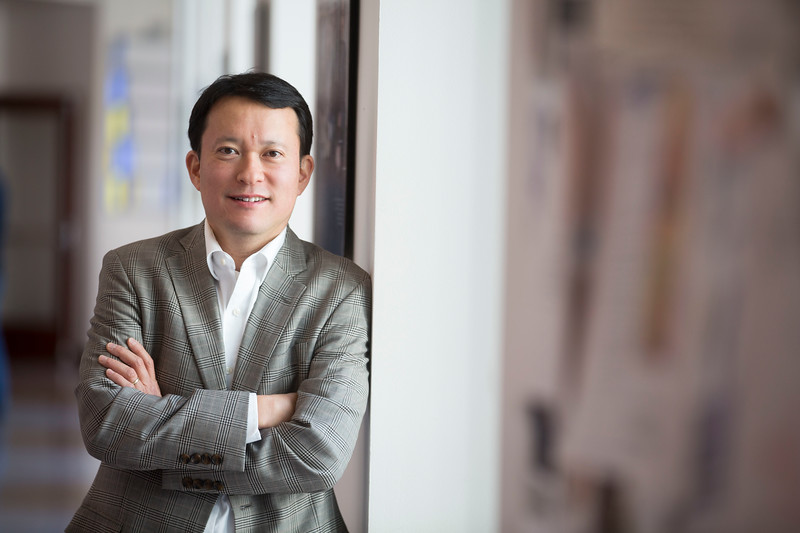 “Those classes helped me understand how systems and processes are built, how they can evolve, and what needs to be considered when we aim to improve and expand them,” says Porter. “I still have a lot to learn, but it was gratifying to see how the skills I’ve gained were useful to my team and to our project.”

Mirza, who is also the executive vice president of the Goizueta Business Association, believes that competitions such as the Healthcare Futuring Competition help build community within Emory and beyond.

“I think we’ve proven how great of an event it can be and I think we have a lot of momentum that we want to build on for next year,” he says. “We’d like to expand this out to other schools.”