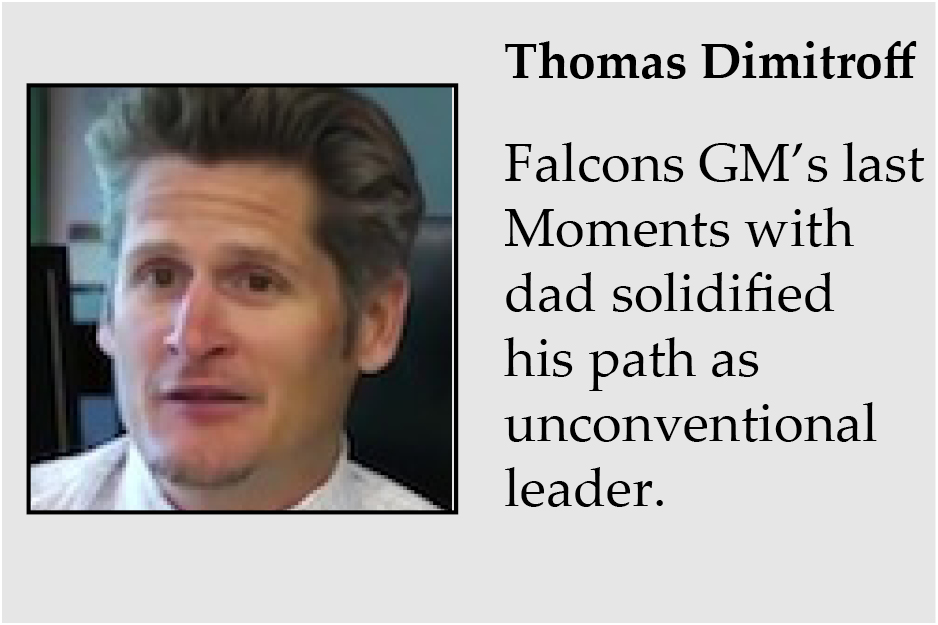 Thomas Dimitroff likes to live life in the fast lane. In his free time, you will find the highly successful general manager of the Atlanta Falcons pushing the limits in extreme sports, such as snowboarding, mountain biking, rock climbing or riding his Harley-Davidson motorcycle.

Under his management, the Falcons have had four consecutive winning seasons, made three playoff appearances and have reset expectations to be considered as one of the elite teams in the National Football League. As he prepares to open his fifth training camp this week with the team he personally rebuilt following one of the lowest points in the often dismal 46-year-history of Atlanta’s franchise, Thomas looked back on the Moment that helped to clarify his vision and his unconventional path.

“I’ve had a number of Moments, but the one defining Moment happened on January 19, 1996, when I was down at the Senior Bowl in Alabama, and I got a call from my Mom and she urged me to go back up to Cleveland as soon as I could because my dad was getting close to the end of his life,” he told us in our accompanying Moments video.

A month earlier, Thomas had spent a few hours talking privately at home in Ohio with his father, Tom, a two-time all-conference quarterback who played under legendary Coach Ara Parseghian and had spent a lifetime in college and pro football as a player and coach. “He was of the Lombardi era. Not soft shoeing. Not being politically correct. Wearing it on your sleeve.” his son recalled – invoking the name of Vince Lombardi, the tough, authoritarian NFL coach who never presided over a losing season and won its first two Super Bowls.

And yet, as Tom lay in bed – a sheet pulled all the way up to his neck, hiding the battle with cancer raging in his body below – he wanted to look back on his own career and to encourage his son not to compromise in his. He told Thomas that even though his own career might have been more successful had he been “more politically correct,” he urged his son to be true to himself.

“He was sharing with me how important it was for me to truly live my life the way that I wanted to live my life.” Thomas told us in his office at the Falcons complex in Flowery Branch. “Live it the way I live and not to care what anyone else thought and that I was to approach it with my positivity and passionate and persevering approach to life. And to live with my passion – shoot for the stars. Don’t look back and don’t look for the judgment from other people and make sure this is how I wanted to do it.”

At the time, Thomas was living in Atlanta’s Virginia-Highland neighborhood, employed as the Southeastern scout for the Detroit Lions, playing hacky-sack in Piedmont Park on his afternoons off. A month after his visit with his dad, he was attending the Senior Bowl in Mobile, Alabama, evaluating the skills of all-star college players when his mother called him back home.

“I remember very, very vividly coming into the hospital and walking into the room where my father was on his hospital bed with my mother beside him at his bedside and seeing my father for the first time having lost all his weight in a state that I had never seen my father before,” Thomas said. “And I remember walking out of the room with my mother to visit with the doctor and get an update where my father was with his illness. And I remember how vivid the description was and looking at my mother and seeing the pain in her eyes and walking out of that room together with the amount of emotion that we had and going into my dad’s bedside and seeing my mom deliver the message to my father that it wasn’t going to be long.

“And I remember seeing my father after my mom delivered the message that it will be soon and my father saying very, very calmly with an incredible amount of confidence and peace, saying to my mom, ‘Helen, this is what we’ve been praying for. I’m finally going home.’

“To see the emotion, to see the love between two individuals and the amount of caring and trust and to see how fleeting life was – incredibly wonderful at so many levels, but again fleeting – and that my father was able to accept that at death’s door, with the person he loved for the longest time. They were best friends.

“Understanding at that point … what hit me was embracing life and moving forward and completely understanding that you have to embrace the Moment whether it was at that Moment or the next day when my father did in fact pass away – or in the years to come in my career how I grasped as much as I could in the late ‘90s and into the 2000s, into my career to where I am today as general manager.

“I remember at that point I started to sort of cultivate this idea of what really was important and I came up with some ideas that really set in and basically had to do with Soaring, Savoring and Sharing life and our Moments. And I thought at that Moment everything that I learned from my father was about shooting for the stars and going big. It was about savoring those Moments and making sure we were really appreciating where we were and understanding legacy and being able to share everything I owe him in the long run.

“The Moment with my mother and father – that was the closest I had ever been to death and again stepping back and realizing the fragility of life and how like that we can move on to whatever we believe is the next life. And that made me believe how important it is climb more mountains, ride more merry-go-rounds and dance more dances and truly embrace life.”

Today, Thomas and his wife, Angeline, and their son, Mason, live in the Garden Hills neighborhood of Atlanta. When they visit Piedmont Park these days, it is to follow Mason on his bike around the new Legacy Park addition. Thomas has been honored twice with the Sporting News NFL Executive of the Year. The day after we visited with him this summer, he was awarded the Horrigan Award by the pro football writers for his accessibility to the media. His kind and courteous demeanor belies the steely competitive drive inside.

Appropriate to the modern technological age we live in, Thomas was the first GM in NFL history to be hired on the basis of a video conference call in 2008. The conversation took place as Thomas was in Boston preparing for the post-season with the New England Patriots. Falcons owner Arthur Blank was searching for a franchise savior following an embarrassing season with the sudden departures of quarterback Michael Vick and coach Bobby Petrino.

“The NFL is very conservative in many many ways,” Thomas told us. “I’m ostensibly anomalous in certain ways … humbly anomalous. As I was walking into the video interview with Arthur, I decided I was going to do what I can and get my point across and swing for the fence. I realized 10 minutes into the call, we were Incredibly congruent with our leadership style. We were just hitting on all cylinders.”

Four days after the four-hour video interview, the Falcons hired Thomas as GM. In his first few moves, Thomas hired coach Mike Smith from Jacksonville, traded for running back Michael Turner and selected quarterback Matt Ryan in the first round of the draft. The Falcons, which previously had never delivered two winning seasons in a row, have never looked back.

“That is how my life is, that’s how I approach life,” he said. “I make sure that I think and don’t just flippantly jump off of mountains or hang off the edge of cliffs, but I truly do embrace the opportunity to live those euphoric Moments and a lot of that has to do with my experiences through my father’s battle with cancer. So that’s been the most important Moment for me.”

Disclosure: Chris Schroder has been a diehard Atlanta Falcons fan since his dad took him to all the games in their inaugural season of 1966. He’ll be in his seats again this year. Hope springs eternal!

Next week in Moments: Doug Hertz, president of United Distributors, who had a Moment while founding Camp Twin Lakes, which serves children with serious illnesses.