Fortune 500 has no female CEO from Georgia – yet 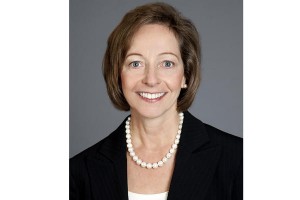 Veritiv’s Mary Laschinger would be the first female CEO of a Fortune 500 company in Georgia.

Few people have even heard of the company Veritiv. But by next year, it will become one of Atlanta’s best-known companies. That’s because it will have the first woman CEO of a Fortune 500 company based in Georgia.

Veritiv formed last July through a merger of Unisource and a division of International Paper – xpedx.  The company held its first annual meeting this Wednesday.

And its CEO is Mary Laschinger, formerly a key executive at International Paper and the CEO of xpedx.

Up until now, women have not fared that well at the top of the corporate ladder in Georgia.

Women were passed over in two recent high-profile opportunities.

At Home Depot, three internal candidates were being considered to succeed Frank Blake as the CEO. Carol Tomé, who had served as the company’s chief financial officer dating back to the founders, had as good a shot as any. But the top job ended up going to her colleague, Craig Menear. 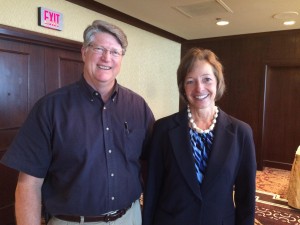 Mary Laschinger standing next to John McCarty, a shareholder at Veritiv’s annual meeting

The other lost opportunity was Newell Rubbermaid. Again, three internal candidates were being considered – including Penny McIntyre, who was running half of the business. The job ended up going to a director – Michael Polk.

Sadly, few women are being groomed to be the next CEO of Georgia’s major companies. OnBoard, an association that tracks the percentage of women on Georgia’s corporate boards as well as those sitting in the executive suites,  sees much room for improvement.

So when Veritiv picked Atlanta as its headquarters – over Cincinnati, Charlotte and Dallas – Atlanta not only got a new Fortune 500 company. The greatest gift was having Mary Laschinger appear on the scene.

Laschinger is already serving on the board of the Metro Atlanta Chamber. She’s looking forward to putting down her roots in Atlanta and making sure Veritiv becomes engaged in the community.

Given the scarcity of top women executives in Georgia’s business community, Laschinger will have ample opportunities to be a role model and set an example for other companies around the state.

So welcome to Mary Laschinger. You are giving women in Georgia a reason to celebrate.