Frankie’s a favorite spot along the Silver Comet Trail

Nearly four years ago, I told Frankie Pence I would come meet her in person at her Italian restaurant in Rockmart.

Never did I think it would take me this long to make good on my promise. But I’m so glad I finally made it.

On Saturday, my son, David, and I loaded up our bicycles and headed for Rockmart. We parked near Frankie’s Italian Restaurant, and then headed out for a 16-mile ride — eight miles east and back — along the Silver Comet Trail. 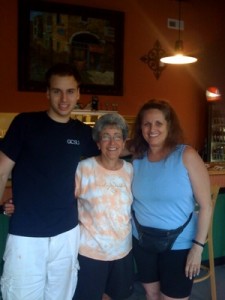 When it comes to cycling in Atlanta, there are few places as delightful as the Silver Comet Trail. There are sections of the trail that are totally surrounded by acres and acres of forests through a wildlife management preserve.

David stopped me at one point to make sure I didn’t cycle over a green snake crossing the path.

At another point, we stopped to suck on honeysuckle blossoms. David saw a hawk or a buzzard. I enjoyed seeing all the trees untouched by urban profiteers. And occasionally we would see farms with livestock.

It was an overcast day with intermittent showers. We were lucky to ride our bicycles in between downpours. Other than a few sprinkles and some gusts of wind, it was a wonderful day for a bike ride.

In downtown Rockmart, the trail and the river have become a showplace for the town. There is a park area along the trail with places for picnics. We even passed a family taking dips in the stream.

We ended our ride with a late lunch at Frankie’s.

After ordering our food, I told Frankie that I had spoken to her on the phone several years ago. When I introduced myself, her face lit up and she gave me an extra warm hug.

She told me that the article I had written in the Atlanta Journal-Constitution’s Horizon section back in August 2005 had helped keep her in business. It’s always good to hear that journalists can be a force of good in our communities.

The truth is that many people have helped make Frankie successful. She specifically mentioned the PATH Foundation’s Ed McBrayer as one of her strongest supporters. But no one is more responsible for creating a special stop along the way than Frankie herself.

It was quickly apparent that her restaurant has become one of the main attractions along the Silver Comet Trail. Nearly every inch of the restaurants walls are taken up with people’s signatures and photographs marking their stops at Frankie’s Italian Restaurant.

When we were there, there was a couple, most likely in their late 50s or early 60s, who had been camping nearby. They had been cycling in Florida. And they were headed to South Dakota for more cycling. They came to say good-bye to Frankie. They promised they would be back.

For me, the best part of going to Frankie’s was seeing that she had made it. When we had spoken several years ago, her business fragile and she wondered whether the gamble to put a restaurant along the Silver Comet Trail would pay off.

It has. Not just for Frankie, but for all the people in Rockmart who have seen that a beautiful bicycle trail can help transform a town.