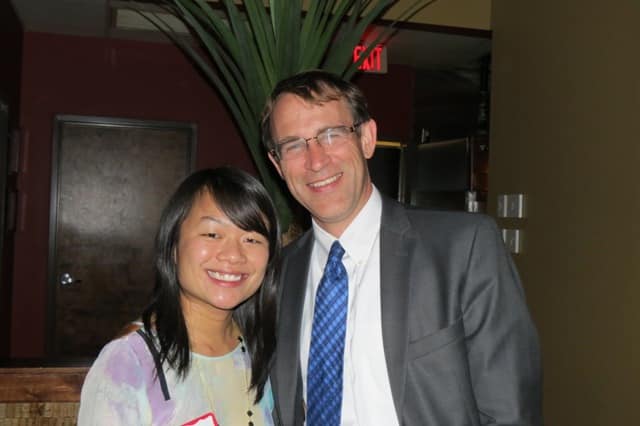 Veteran parks and conservation advocate George Dusenbury IV has been named the Georgia State Director for the Trust for Public Land.

He succeeds Curt Soper, who moved to the Pacific Northwest this summer to accept a position as executive director of the Chelan-Douglas Land Trust.

In his new role, Dusenbury plans to focus on improving access to parks in Atlanta, expanding conservation efforts around the Chattahoochee River and working in partnership with individuals and organizations throughout the state. 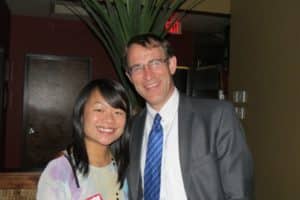 Amy Phuong, currently Atlanta’s commissioner for parks & recreation, stands next to George Dusenbury, when he was commissioner of the department (Photo : courtesy of Park Pride)

“I have always admired the Trust for Public Land, and I thought it was a great opportunity to get something done in an area I really cared about,” Dusenbury said in a telephone interview Monday evening. “As I see it, TPL put the parks and green space that are part of the BeltLine.”

Dusenbury has a strong background in the area of public policy and green space. When he was serving as the legislative director and district director for U.S. Rep. John Lewis, Dusenbury remembered working with TPL on the National Park Service’s Martin Luther King Jr. historic district. He then became executive director of Park Pride, a nonprofit organization dedicated to building public, civic and private support for Atlanta’s parks.

Then in 2010, Atlanta Mayor Kasim Reed tapped Dusenbury to become commissioner of the city’s Department of Parks & Recreation. During his four-year tenure, he helped lead the administration’s efforts to increase park acreage in the city and improve the percentage of city residents living within a half-mile of a park.

Dusenbury left the city in 2014, and he established the Dusenbury Consulting firm.

“George is the perfect choice for this job, bringing exactly the right mix of conservation, advocacy, and management experience to the Trust for Public Land,” said Patricia Barmeyer, TPL Georgia’s board chair. “With his background George will hit the ground running, and we are eager to work with him to advance our goal of access to parks and open space for all Georgians.”

One of Dusenbury’s top priorities will working on the final design for a proposed 16-acre park in the Vine City neighborhood. The site will be developed in partnership with the Atlanta Department of Watershed Management and the city’s Department of Parks & Recreation.

When completed, the park – which has not been given a final name – will increase access to recreational opportunities in Vine City and improve the area’s green infrastructure – helping the community better cope with major storms – capturing rainwater in a central water feature rather than the storms causing flooding in the neighborhood.

Another major priority for Dusenbury will be to protect land along the Chattahoochee River – both outside metro Atlanta and within the suburban and urban neighborhoods.

TPL has had a long history with the Chattahoochee. It has helped acquire and preserve 18,000 acres along 77 miles of the river. It’s most recent acquisition completed a contiguous 8-mile stretch in the northern Atlanta suburbs.

Working with a host of partners that have been involved with the Chattahoochee River Land Protection Campaign, Dusenbury will explore opportunities to develop parks and trails along the river.

“One thing I’m really excited about is that there are so many people I’ve worked with, and I’ll have an opportunity to reengage with them,” Dusenbury said. “We will be looking for partners. We recognize that working together, we will get a lot more done.”

Dusenbury said he already has been having conversations with other leaders of conservation groups to help figure out how they can work together to build more support for parks and public spaces.

“TPL is going to be active – working with Park Pride – to make sure parks will be a priority of candidates running for mayor and city council,” Dusenbury said. “I’m excited about TPL even doing more than it has.”

Previous Article
Hurricane Matthew in Haiti: More people will die if we don’t act now
Next Article
Atlanta Hawks reach agreement with the city on a $192.5 million renovation of Philips Arena