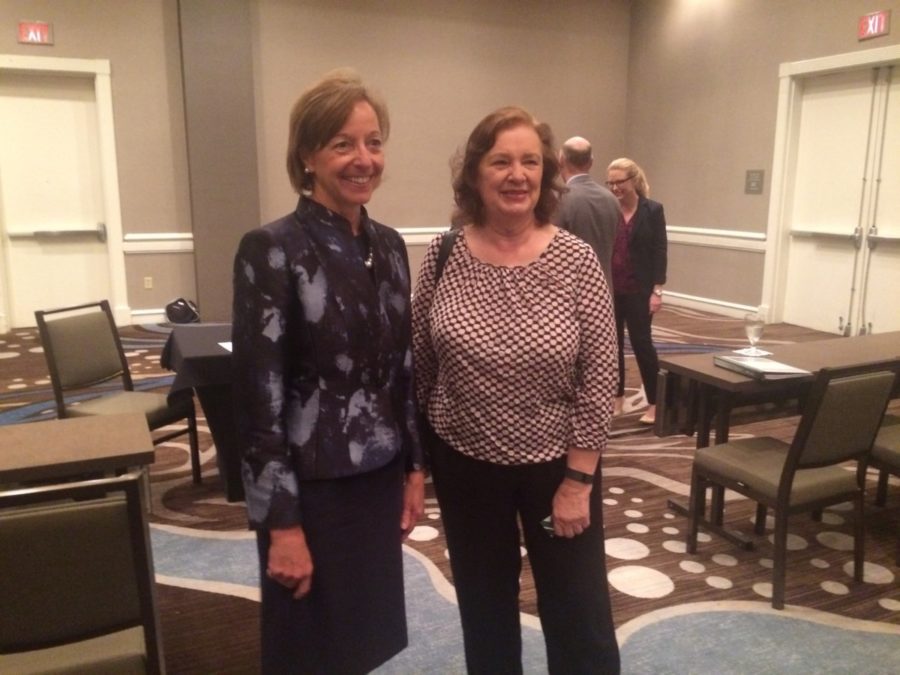 Veritiv CEO Mary Laschinger poses for photos with Suzanne Mulcay, the one outside shareholder who attended the company's 2016 annual meeting (Photo by Maria Saporta)

Fortune made it official Monday morning.

Georgia has a new Fortune 500 company – Veritiv – giving the state a total of 18 companies on the list.

And for the first time ever, Georgia has a woman at the helm of a Georgia-based Fortune 500 – Mary Laschinger, Veritiv’s CEO.

Veritiv, a leader in business-to-business distribution solutions, had $8.7 billion in revenues in 2015 giving the company a rank of 323 on the Fortune 500 company. It is ranked 10th among Georgia’s Fortune 500 companies. 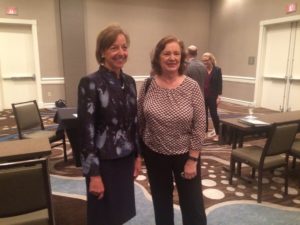 In an interview five days before the list came out, Laschinger said she had been so busy putting together the new company, she and her team members never really focused on the Fortune 500 rank.

“Our employees are now saying this is really cool,” Laschinger said. “It is one of those outcomes we did not anticipate.”

But Laschinger immediately brought up the business advantages of the being named to the influential list.

“Our customer base is half of the Fortune 500,” she said. “It’s an exciting time for us. We are right there with our customer base, but I think it raises the bar around expectations, which is good. I also think it illustrates our success to date.”

In the interview, Laschinger played down the fact she’s a woman.

“I’ve never focused on those kind of things,” she said. “I do ask myself: ‘How did this happen?’ There’s no question I’ve worked very had. I’ve been courageous in some of the choices I’ve made.

“I’m proud to represent the company in this way, and if the fact that I’m a woman brings even more light and attention to our company, it makes me even more proud.”

Laschinger, however, did exhibit what can be described as a  feminine trait by being careful to credit her entire team.

“I didn’t do anything alone,” she said. “It is all about the people I surround myself with – I couldn’t be more proud of them.”

Veritiv was established in July 2014, following the merger of International Paper Co.’s xped.x distribution business and Unisource Worldwide. In 2015, the company achieved solid financial results and remained focused on delivering the company’s commitments and generating value for shareholders.

“The metro Atlanta area and the state of Georgia are home to some of the world’s most recognized and successful companies,” said Hala Moddelmog, president and CEO of the Metro Atlanta Chamber, in a statement. “We are thrilled to have Veritiv and its Chairman and CEO Mary Laschinger added to this list of global leaders who call the Atlanta area home. As the first female CEO of a Georgia-based Fortune 500, Mary’s leadership and command of business issues are welcomed by all of us who are committed to a growing and thriving Atlanta business community.”