Atlanta Mayor Andre Dickens announces "Green Cabinet" to advise him and the city on parks and greenspace. (Photo by Kelly Jordan.)

Atlanta Mayor Andre Dickens announced Wednesday that he will have a Greenspace Advisory Council to help guide city policy when it comes to its parks and natural areas.

The Council, which Dickens referred to as his “green cabinet,” includes 13 environmentally-focused nonprofits that serve the city and the Atlanta region.

“Our intention is to use them as a resource for the city,” said Dickens, who added that he “expects the members of this council to help us stay on track and help us to remain accountable” in implementing the city’s five-year strategic plan for parks, green space and recreation. 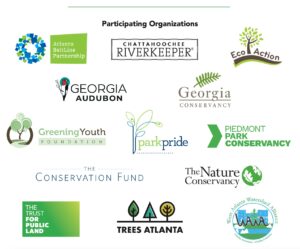 The 13 organizations that have been advocating for the City of Atlanta to have a “Green Cabinet.”

Dickens also announced that one of the members — Park Pride — is making grants to 24 communities across the City of Atlanta and unincorporated DeKalb County totaling $2.3 million, the largest grant cycle in its history and exceeding last year’s grants by nearly $1 million.

The announcement of the mayor’s “Green Cabinet” culminates years of work by local environmental groups, which have collaborated on mayoral forums and joint meetings to ensure parks and greenspace are an important priority for the City of Atlanta.

During the summer, the 13 nonprofit organizations met with the leading mayoral candidates to hear about their commitment to parks and to present the group’s thoughts and recommendations. With Wednesday’s announcement, Dickens obviously had embraced the idea of a green cabinet.

The Council is expected to meet on a quarterly basis, which is similar to the meeting schedule of the Atlanta Committee for Progress, a high-powered group of business, academic and civic leaders.

Asked whether the Council would be the green version of the Atlanta Committee for Progress, Dickens laughed, saying: “Yeah, something like that.” 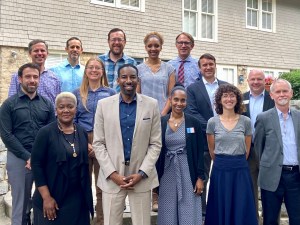 One of the Greenspace Advisory Council’s major responsibilities will be in helping the city implement its strategic plan for parks.

“This strategic plan lays out the framework to investing and connecting and growing the city’s parks and recreation system,” Dickens said. “It outlines actions that will be taken over the next five years. And these actions tie back to ambitious and measurable goals that ensure accountability, equity and progress.”

Dickens also mentioned that the strategic plan will require support from the Atlanta City Council, and it will be instrumental as the city seeks voter approval on an infrastructure bond referendum in May, which could result in “Atlanta’s largest investment ever in our parks and recreation system.”

Asked whether the investment would be in expanding parks or maintaining Atlanta’s existing parks Dickens said it was “not an either-or, but a both-and” approach.

Dickens also said the Council, which met with the mayor for the first time before the City Hall press conference, talked about the need for having a collective impact – connecting parks with affordable housing, public safety, youth engagement and climate change. The Council also would advise the city on green jobs and developing a green economy in Atlanta.

“There’s so much more that this team of folks has done and things that they’ve already said that they want to see us do together with this administration,” Dickens said. “So, I’m excited about this green cabinet.” 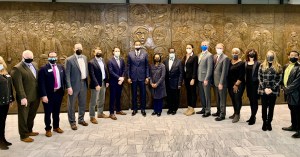 Atlanta Mayor Andre Dickens announces “Green Cabinet” to advise him and the city on parks and greenspace. (Photo by Kelly Jordan.)

The mayor did highlight Park Pride and its latest round of grants totaling $2.3 million.

Park Pride’s Grantmaking Program was established in 2004 to award funds to community groups seeking to revitalize their neighborhood greenspaces. It has been designed to support Friends of the Park groups and help them take on larger projects as they grow and develop capacity. Grants have ranged from $250 to $100,000 or more.

The program is supported by the Robert W. Woodruff Foundation, the Home Depot Foundation, the City of Atlanta, and others. To date, Park Pride has awarded more than $12.7 million to park projects, including new playgrounds, bridges and piers, ADA-accessibility upgrades, kiosks and signage, trails, exercise equipment, community gardens, green infrastructure like rain gardens and bioswales and art installations.

The City of Atlanta is the program’s most recent funder. In 2021, public funding was allocated to Park Pride through legislation from Atlanta City Council, designated for park improvement projects in low-income communities.

“Due to increased support from our philanthropic and public partners, Park Pride’s citywide impact is larger than what’s ever been possible,” said Michael Halicki, Park Pride’s executive director. “With 60 percent of our total grant awards directed to low-income community parks, we’re reaching those who have the greatest need for the benefits that parks provide: safe places to play, improved mental and physical health, cleaner air and water. I couldn’t be prouder of the work we’re doing together.”

Atlanta leaders committed to fulfilling promise of rail on the BeltLine
Maria Saporta May 23, 2022 6:28 pm

Atlanta leaders committed to fulfilling promise of rail on the BeltLine