Hank Aaron reflects on past 50 years in Atlanta; Braves move to Cobb

By Maria Saporta
Published in the Atlanta Business Chronicle on Oct. 24, 2014

Sitting in his expansive living room in southwest Atlanta, a subdued Henry “Hank” Aaron reflected about the day 50 years ago when he heard the news that the Milwaukee Braves would be moving to Atlanta.

Contrary to urban legend, Aaron was not upset that his team would be moving to the segregated South. Aaron, who had grown up in Mobile, Ala., played for the Jacksonville Braves and had traveled throughout the South when he was in the minor leagues. “It was something I had to get used to,” he said.

After all, what mattered to Aaron was: “I’m going to be playing baseball.”

Spending a couple of hours with Aaron and his wife, Billye, in their home on a recent Saturday afternoon, one trait is readily apparent — loyalty.

That’s how Aaron felt about the Braves back in 1964 when the team’s board approved the move to Atlanta on Oct. 21.

“Coming up through the minor league system, I had always been affiliated with the Braves,” Aaron said. Because he cared about playing baseball, it didn’t matter if he was in Milwaukee or Atlanta. “I don’t have to be associated with anybody but the baseball players.”

There was an added bonus. By moving to Atlanta, he would only be five hours away from his parents in Mobile, Ala.

“My mother and father always wanted to see me play on a regular basis; they used to come see me,” Aaron said. “My mother was getting up in age, and I was able to see her. It was a blessing to be near my mother and my father.” 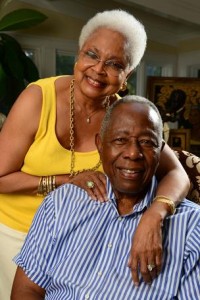 Aaron also had learned to tune out the racist remarks and hateful expressions hurled his way as his number of home runs climbed into Babe Ruth territory.

“I kind of had thick skin,” Aaron said in his understated way. “My agenda was to try to win fans the way I had won fans in Milwaukee…. I had to be a good ballplayer. That was No. 1. People wanted to see me perform. I had to be a home run hitter. I had to hit the ball out of the ballpark. When that happened, other doors opened.”

Atlanta also was different from the rest of the South with its large cluster of historically black colleges. It also was home to the civil rights movement. And it had a powerful core of enlightened business and political leaders.

“You can go 20 miles outside of Atlanta and be in a different part of the world,” Aaron said. “Atlanta has always been different. You had so many great civil rights leaders here, and you had the universities. In Atlanta, you were not in the deep South. I never had problems in Atlanta.”

So when Aaron, 80, was asked about the Atlanta Braves’ decision to leave Turner Field after the 2016 season and move to Cobb County, he admitted to having “mixed feelings,” adding that baseball is a business.

“It’s bigger than me,” said Aaron, who is still affiliated with the Braves. “It goes beyond how I feel.”

Aaron said the team never talked to him about the move, which he described as a sad development resulting from a breakdown of communications between the City of Atlanta and the Braves.

“Nobody wanted to find a solution,” Aaron said.

But Billye Aaron is more outspoken, saying that by moving the team to Cobb, the Braves “are creating a deeper divide” in the region.

She even half-jokingly asked if the Atlanta Braves were going to change the name of the team to the Cobb Braves when they moved outside the City of Atlanta.

For Billye Aaron, the Braves move to Cobb is a symbolic step backwards.

“We have lost that devotion and loyalty to this city,” she said. “Too often the leadership is just missing here. No one steps in to fill the gaps and says let’s do this because it’s right. We are not a healed community. We have really lost a lot in the last few years.”

And what about the Hank Aaron statue — now prominently displayed at the front door of Turner Field — the address is 755 Hank Aaron Dr. SE. – a tribute to the number of home runs Aaron hit in his remarkable career?

Will the Hank Aaron statue follow the Braves move to Cobb?

For the record, Atlanta citizens, led by sports aficionado and former Braves PR man Bob Hope, raised the money for the statue. It sits on land that is owned by the Atlanta-Fulton County Recreation Authority, and it does not belong to the Atlanta Braves.

If the Aarons have any say-so about where the statue’s final resting place will be, they insist it should stay in Atlanta.

Billye and Henry Aaron know that when the Braves move out of Turner Field and when the property is put on the market to be redeveloped, it is possible the statue could be moved. But they both said it should stay in Atlanta in a location that is historically significant to the role the city played in bringing the races together.

To capture the real essence of how Henry Aaron helped changed the hearts and minds of people in Atlanta, one only has to read the words uttered by Dodgers broadcaster Vin Scully on April 8, 1974.

When Aaron hit his 715th home run, which broke Babe Ruth’s career home run record, Scully let the sounds of the crowd’s roar fill the airwaves for a minute-and-a-half. And then he said:

“What a marvelous moment for Atlanta and the state of Georgia; what a marvelous moment for the country and the world. A black man is getting a standing ovation in the deep South for breaking a record of an all-time baseball idol. And it is a great moment for all of us, and particularly for Henry Aaron…. And for the first time in a long time, that poker face in Aaron shows the tremendous strain and relief of what it must have been like to live with for the past several months.”

Aaron humbly acknowledged his contributions to better race relations in Atlanta. He certainly does feel nostalgic about the location where his own history took place.

“I felt like that ballpark was made for me,” Aaron said. “I felt like whoever was out there pitching, they couldn’t get me out.”

Aaron said the last game he saw at the Atlanta-Fulton County Stadium was Cuba versus America during the 1996 Summer Olympic Games. He noted that he was in Alaska when the stadium was imploded.

But Aaron has also felt connected with Turner Field — especially because of the former owner of the Atlanta Braves — Ted Turner.

“He was the best bossman I ever had,” Aaron said.

When the Olympic Stadium was transformed into Turner Field, Aaron appreciated how the powers that be kept the circular outline of the old Atlanta-Fulton County Stadium — marking the very spot where his 715th home run went out of the park.

Aaron said has a request of whoever might redevelop the Turner Field site.

“I hope they see fit to keep the wall, or keep some parts of it,” Aaron said. “I know it was history. When I’m no longer here, I want my grandson, my grandkids to say: ‘This is a spot where my grandfather hit the home run.'”

As for the actual 715 home run ball now encased at Turner Field, Aaron said: “It will be given to Cooperstown.”

In reflecting over the past 50 years, the Aarons have seen the tides of race relations follow the ebb and flow of history.

After the Braves announced, in November 2013, they were moving to Cobb, the county’s Republican Party chairman, Joe Dendy, said: “It is absolutely necessary the (transportation) solution is all about moving cars in and around Cobb and surrounding counties from our north and east where most Braves fans travel from, and not moving people into Cobb by rail from Atlanta.”

Couple that statement with the racially divisive comments from former L.A. Clippers owner Donald Sterling and the recently disclosed email from Atlanta Hawks managing owner Bruce Levenson plus the disparaging conference call transcript from Hawks general manager, Danny Ferry (now on indefinite leave), and Aaron questions how much progress has really occurred over the past 50 years.

“In some ways we have gone backwards,” said Aaron, adding that it brought back memories of his experiences when he was playing baseball during the days of segregation. “The playing field still is not quite as level as we think it is. We are not there yet.”

Until African-Americans are fellow owners of major-league ball clubs, Aaron said they will not be viewed as equals. Aaron said he had explored the possibility of becoming an owner of the Hawks, but the price was out of his range.

Plus he already is on the board of the Atlanta Falcons, and in his heart of hearts, he is a baseball man — worried about the Braves’ drop in attendance, about whether baseball teams are pricing themselves out of the market and why there are not more black baseball players.

And if baseball is his true love (other than his wife, Billye), Aaron’s home base will always be the now-demolished Atlanta-Fulton County Stadium.

“I spent many days there and many nights at the stadium if we played late at night,” said Aaron, remembering the hate mail and the threats on his life. “During those times, it was very scary. I felt so comfortable when I was at the ballpark than any place I’ve ever been. Nothing and nobody could do anything to me. It just felt like God had his hands around me. And nothing, no matter whether it was a bomb or a threat, it couldn’t hurt me.”

To watch a short video of Maria Saporta’s interview with Henry ‘Hank” Aaron, which was shot and edited by Byron Small, please click here.

Previous Article
Investment bankers hired to sell Atlanta Hawks – at least half of team
Next Article
Ebola screenings at Atlanta’s airport of 27 passengers, none test positive