Jackson, Ga. — When a tractor-trailer is barreling down behind you on I-285, the driver may not seem human at all. 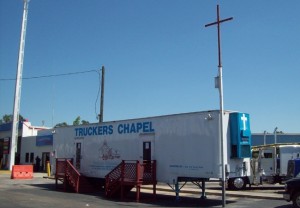 The Truckers Chapel can be found at the TravelCenters of America truck stop at exit 201 on I-75 in Jackson.

Pull over at exit 201 off Interstate 75, and you see the personal side of the men and women who drive the big rigs.

About 40 miles south of Atlanta, the Trucker’s Chapel is a truck trailer converted into a sanctuary. Some of these truckers carry hefty emotional loads and seek pastoral help to go the distance in life, not just behind the wheel.

“When you’re traveling on the road, it’s pretty lonely out there even though you’re in a crowd,” said “Chaplain Joe” Hunter, president of TruckStop Ministries Inc., which maintains 82 similar chapels at travel centers in 29 states and is headquartered next door. “We provide a place where they can come and have fellowship, somebody they can talk to, a shoulder to lean on.”

The chapels grew out of Hunter’s own loss and need. His father died when Hunter was 3. He served in the Vietnam War, then came home and became a trucker.

While living on the road, Hunter said, he fell into drinking and drugs. He had little use for religion. 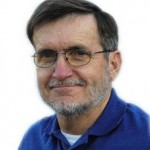 When Hunter hit the skids, he wandered into a small Baptist church in Dublin, Ga. and through the preacher, heard the voice of God speak to him.

Hunter gave his life to Christ, he said, and gave up drinking and drugs.

That conversion drove his unique spiritual calling. He sought convenience churches on the road, only to find frustration.

His mission field was wide, full of workers who each were cogs in a much larger cause. According to the American Trucking Association, nearly 70 percent of the freight tonnage in our country moves by truck. “Without the industry and our truck drivers, the economy would come to a standstill,” the organization states.

The Jackson chapel is located on a street called His Way at the TravelCenters of America truck stop overlooking I-75.

Here, truckers get some Christian spiritual nourishment, a hot shower and a good meal. The chapel is part of a larger ministry to truckers that includes free Bibles and meal vouchers. Beyond Hunter’s three weekly services, the chapel is open daily for visitors to spend some quiet time to log prayer requests or pick up pamphlets and religious tracts. Some of the titles include: “Where is your Destination?” and “God’s Last Name is not Damn.” 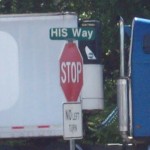 The chapel is at the end of a road called “His Way.”

Other offerings include morality tales told in pocket-sized comic book format. One of them, entitled “The Sissy?” is about a couple of crusty big-rig drivers who encounter a Christian trucker on the road. One of the drivers, Duke, tells the Christian over dinner that Jesus must have been “a sissy.”

“In my book, any man that turns the other cheek is a chump,” Duke says.

Duke, of course, has a change of heart by the end of the tale. “That Jesus had more guts than any man that ever lived,” he concludes.

Real-life truckers, said Bob Ryan, don’t fit the stereotype of the hard-living, hell-raising road warriors they’re often made out to be.

“The vast majority of drivers are some of the finest people you’ll ever meet. There’s a small element that yes, cause problems,” said Ryan.

Ryan is president and owner of the truck stop. He and his wife, Susan, donated the trailer chapel to Hunter’s ministry 18 years ago, he said.

Stops along the way

TruckStop Ministries was born from a Bible study Hunter founded in 1981 at a Moreland Road truck stop. His organization later moved the ministry to Jackson, a location Ryan said had less crime, fewer “lot lizards” (prostitutes) hanging around and better security.

“They asked if they would be okay if they could set up a temporary place (on the TravelCenter property). That was over 20 years ago,” Ryan said, chuckling.

There are three regular services every week, but the chapel is open daily to visitors looking for spiritual quiet time.

Ryan said the chapel makes a huge difference in the lives of people who are just passing through as well as those who work there every day.

“I start my day out there every single day,” said Ryan, who holds weekly gatherings with employees in the chapel.

Hunter said he’s witnessed many wonders through his ministry. That includes witnessing the Holy Spirit take away drivers’ addictions, including his own son’s seemingly unshakable methamphetamine habit.

At Trucker’s Chapel, the trucker stereotype is replaced with a shared humanity, that recognizes the stress of travel over long distances, dealing with bad weather, operating heavy machinery and being separated from family and loved ones.