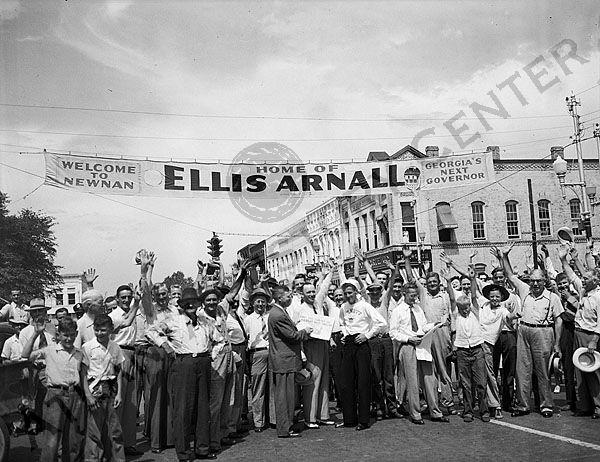 This week guest contributor THOMAS A. SCOTT, professor emeritus of history at Kennesaw State University, looks at the education, voting, and prison reforms of a forward-thinking governor.

By Thomas A. Scott

Georgia’s 82nd governor, Nathan Deal, took office for a second term on January 12. Inauguration days are hopeful occasions, as new or returning executives present visions of what our future can be. For those with long memories, inauguration days are also times for reflection about the nature of leadership and where past governors tried to take us. In Georgia we’ve had a number of effective recent governors who took the state where it needed to go, although not necessarily where it thought it wanted to go.

Roy Barnes comes to mind as a consequential governor who led the fight to change the Georgia flag, removing the old Confederate battle emblem. Zell Miller was also a gifted leader whose HOPE scholarship program was one of the most progressive reforms in the history of American higher education. Jimmy Carter’s inaugural address in 1971 was perhaps the most memorable of modern times when he became the first Georgia governor to say that the time for racial discrimination was over. 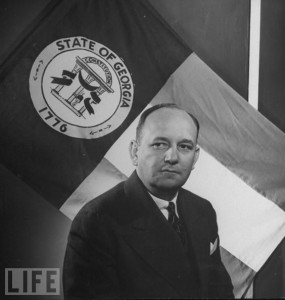 If great leaders take people where they didn’t know they wanted to go, but where they needed to go to stay in step with the future, then Ellis Arnall has to be listed as one of the most effective leaders in Georgia history.

Arnall’s precocious rise in Georgia politics began in 1932, when he was elected to the Georgia legislature from Coweta County at age 25. By the time he was 31, he was Georgia’s attorney general.

Then-governor Eugene Talmadge made the largest political blunder of his long career when he tried to purge the University System of Georgia of alleged advocates of “communism or racial equality.” Among the casualties were UGA’s dean of education, Walter Cocking, and Georgia Southern’s president, Marvin Pittman. When the Southern Association of Colleges and Schools stripped the university system of its accreditation, students and parents across the state rose up in protest. In the 1942 gubernatorial election, Arnall defeated Talmadge by promising to reorganize the university system in ways that protected academic integrity. He was only 35 years old on inauguration day.

In his four years in office Arnall did far more than restore the university system’s accreditation. He brought about voting reforms that put Georgia far ahead of other states in the South and the nation. He championed lowering the voting age to 18. America was at war in 1943, and 18-year-olds were being drafted. Arnall argued if you were old enough to fight, you were old enough to vote. Remarkably, the legislature voted its overwhelming support, and two-thirds of the voters approved a constitutional amendment. Prior to the adoption of the 26th amendment to the U.S. Constitution in 1971, Georgia was one of the few places in the country where 18-year-olds could vote.

The lowered voting age led to another remarkable democratic achievement. As Arnall states in his book, The Shore Dimly Seen, the vote for 18-year-olds caused Georgians to question the fairness of the poll tax. 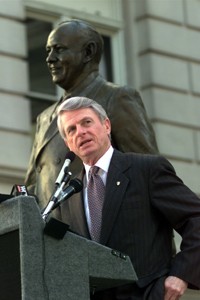 Zell Miller at the dedication of the Ellis Arnall statue at the Georgia State Capitol. Credit: Atlanta Journal-Constitution

Since the 19th century Georgia had required all men between the ages of 21 and 60 to pay a poll tax of one dollar a year. After women’s suffrage became a reality, women between 21 and 60 who registered to vote were also required to pay a poll tax. At one time poll taxes existed everywhere in the country, but by the time of World War II, they had been repealed virtually everywhere outside the South. The tax was a revenue measure, but it was also a stumbling block enacted in part to discourage poor people, and especially poor black people, from voting.

Arnall skillfully evaded the racial aspect of the issue and concentrated on one primary argument: that no one should “have to pay for the right to vote.” In 1945 the general assembly abolished the poll tax, a major step toward democracy some two decades earlier than most other Deep South states, and long before the civil rights movement and federal intervention would have required it to do so.

Arnall did many other things in office, from education to debt repayment and prison reform. But the reforms that are his lasting legacy are clearly the 18-year-old vote and the abolition of the poll tax.

As Governor Deal begins his second term, we can wish him the best and pray that he too exercises great leadership, taking us where we may not know yet that we want to go, but where we need to be to become a truly just and equal society.

Thomas A. Scott is professor emeritus of history at Kennesaw State University. He is the author of three books, including Cornerstones of Georgia History and Cobb County, Georgia, and the Origins of the Suburban South: A 20th-Century History.