The Junior League of Atlanta Inc. (JLA) has a long-standing history of working directly with local, regional and state government to advocate for issues that have a deep meaningful effect on our community. Our more than 2,800 women members are a powerful force advocating for issues that improve the health and wellbeing of Atlanta’s women and children resulting in positive legislative change. Throughout JLA’s 103-year history, the focused efforts of our Public & Political Affairs Committee (PAC) have urged legislative change for victims of domestic violence, stronger legislation for those affected by commercial sexual exploitation and much more. I am extremely proud of the light our organization shines on issues affecting our community and then advocates for positive change. It is this deep commitment to not only inform our membership but also the general public that makes JLA’s advocacy work a mission-critical part of the organization.

Sarah Cadagin, PAC Chair, shares more about JLA’s long history in advocacy work and why the work continues to shed light on the pressing issues of modern day.

For more than a century, JLA’s advocacy work for women and children in the city of Atlanta has been an integral part of the organization. This advocacy work is committed to creating positive change in the lives of women and children focusing on progressive action and coordinated impact. JLA uses its voice for direct advocacy at the local, state and federal level as well as by providing training for members and the public on the most important issues affecting Atlanta’s women and children. JLA’s Public and Political Affairs Committee (PAC) is responsible for much of JLA’s advocacy efforts, and works with elected officials to promote and support legislation pertinent to the JLA’s mission of serving women and children. PAC researches and monitors relevant issues in current legislation; develops public stands each year that guide legislative advocacy efforts; educates JLA members on the political process; and influences legislation through advocacy, negotiation, and mediation. 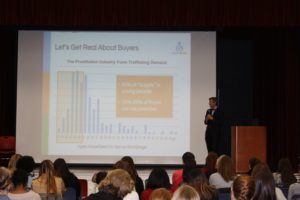 PAC hosted Advocacy Breakfast where JLA members are informed and updated on the organization’s advocacy efforts on the local, regional and state levels. Because JLA strongly advocates for tougher anti-human trafficking laws, then youthSpark’s Executive Director keynoted the event.

In 2014, JLA successfully advocated for the passage of Senate Bill 8 — the “Safe Harbor Bill” extending Georgia statute of limitations for child sex victims and establishing a fund for sexually exploited children. Initiating tough conversations to advocate for legislative change has been a part of the JLA mission going back to the founding days. When JLA started almost 103 years ago, it used the donations from their first fundraiser to establish a home for working women whose jobs did not pay a living wage – a topic that is still on legislative agendas. Decades later, members set up programs focused on education of disabled children which later resulted in the creation of the Atlanta Speech School. Currently, the school is one of the nation’s most comprehensive centers for language and literacy. Throughout the years, JLA’s membership continues its critical advocacy work by being a voice for Atlanta’s women and children by influencing legislative change. 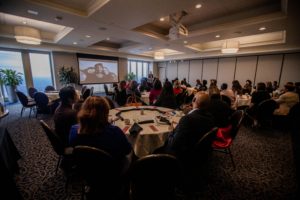 As PAC continues its work of informing JLA members about impact focus areas, it also supports member’s advocacy for Georgia’s women and children. In the current Georgia legislative session, JLA is advocating for important legislation House Bill 8, which seeks to end Georgia’s discriminatory tax on menstrual products. JLA, along with the other Junior Leagues of Georgia, are advocating to end this discriminatory and burdensome tax on medically-necessary menstrual products – the medical term for products that include tampons, pads, cups, menstrual underwear, etc. – which currently are not exempt from the Georgia state sales tax. With over 2,800 members, JLA is able to use its collective voice to advocate on other critical legislation including Senate Bill 327, which mandates employers provide lactation breaks.

PAC hosts JLA members at its signature annual advocacy event, JLA Capitol Day, held this year on February 25. During Capitol Day, JLA members share their legislative priorities directly with state legislators, and several legislators will share their stories to the Gold Dome and encourage members to continue advocating for positive change.  The day is a dynamic and exciting opportunity for the JLA to publicly and personally meet with elected officials, promote the organization’s mission on a larger, state-wide level and join in the engaged journey to be change agents.

Encouraging JLA members to be informed, active citizens can lead to engaged legislative change. Attending events, listening and advocating for positive change for women and children can have a lasting impact on the community.