I love Music Midtown. I have attended every Music Midtown since the festival was launched in 1994, and I have followed the event as it has hop-scotched across town to four different locations and as it has changed from a springtime festival to a fall event.

When Music Midtown went on a six-year hiatus, I lamented Atlanta’s loss.

Now Music Midtown is back — having made Piedmont Park its home for the past three years. To listen to organizer, Peter Conlon, the scaled-down version is doing quite well and Piedmont Park is the perfect spot.

That’s where the mixed emotions come in.

On the plus side, I personally could not ask for a more convenient location. I am more than happy to put up with any inconveniences of closed streets, increased traffic and tens of thousands of people descending on our  neighborhood to listen to music, enjoy one of the most beautiful places in Atlanta and share those once-in-a-lifetime experiences with others.

But on the negative side, I can’t ignore the damage that the festival has on the park. 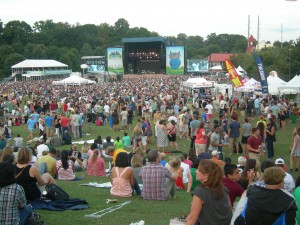 When the rain poured down on Saturday, large portions of the grassy meadows and lawns facing Music Midtown’s three stages were turned into big gushy marshes of mud.

How unfortunate that it rained on the biggest day of Music Midtown — but it’s not new for the event to have bad weather, and the rain certainly didn’t keep the crowds away.

But the rain did damage the green space in the park. And unlike the festival’s former locations, there is much more grass and much less pavement in Piedmont Park — making it much more vulnerable to the trampling of thousands of feet.

As best I can remember, festival organizers are responsible for returning the park back to its pristine condition. Yet even with deep pockets and great intentions, it will take time for the grass to take root and be accessible to the public. 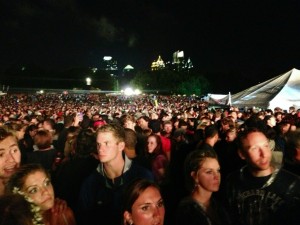 Another concern is the total disregard by Music Midtown patrons to respect the park and to keep it clean.

The amount of trash left behind on the ground — creating a grotesque mix of mud and debris at the end of Saturday night — was disgusting, showing how oblivious music fans were to their environment.

In their defense, the number of garbage and recycling receptacles were few and far between giving people few options of what to do with plastic bottles, cans and trash.

By comparison, when the Piedmont Park Conservancy used to put on its “Green Concerts” — (remember Dave Matthews, Paul McCartney and the Eagles) — great attention was made for people to clean up after themselves. Those concerts were used as teaching moments on how we can live in a more environmentally-sensitive way. 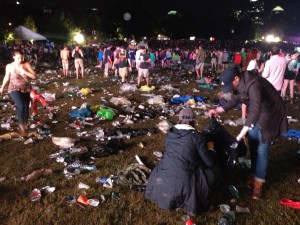 The Green Concerts also raised about $1 million each for the Conservancy — money that was reinvested in the park and its expansion to the north.

What is unclear to me is how much the Piedmont Park Conservancy is receiving by hosting Music Midtown. What I do know is that since the return of Music Midtown, the Green Concerts appear to have been discontinued.

I also know that the previous community that hosted Music Midtown — the area around the Civic Center going toward North Avenue and Renaissance Parkway — received direct cash contributions to maintain their parks and that the close-in residents received passes to the festival. 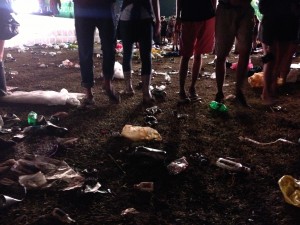 Back when there was an active citizens group looking out for Piedmont Park, we used to say we were loving the park to death. There was a sincere attempt by the City of Atlanta and the Friends of Piedmont Park to limit the number of events and festivals in the park.

Now from early spring to late fall, every weekend there are multiple events in the park — often making it almost off-limits for nearby residents who want to ride their bicycles or walk their dogs or simply be enveloped by an oasis of green in the middle of the city.

Because I love listening to live music outdoors, I certainly support Music Midtown. I thought this year’s line-up was particularly good for the two-day version of the festival. Cake was fabulous — I would have been perfectly happy if they had been the Friday night headliner. 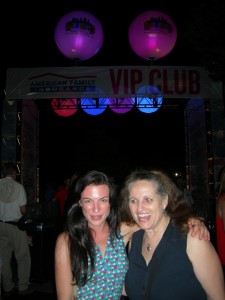 Saturday night’s headliner — the Red Hot Chili Peppers — is one of my favorite bands. I knew it was going to be great show when the Peppers played “The Other Side” early on. I couldn’t stop singing it all night.

Other highlights for me were the bands — Phoenix and Capital Cities — both bands that are up-and-comers. That’s one of the reasons I love Music Midtown — it’s an opportunity to discover many new artists and to stay current. For example, I remember being able to right up front to the stage to see Jack Johnson play before he became so well-known.

I have so many great Music Midtown memories — dating back to its inception when the festival was nestled between Peachtree and West Peachtree, and 10th and 11th streets. One year it moved downtown to Baker Street before finding a multi-year home around the Civic Center.

Today Music Midtown is creating new memories for younger generations of people — some who weren’t even born in 1994. And that is cause for celebration.

But please, let us find a way to love our music, our precious green space and our city all at the same time.