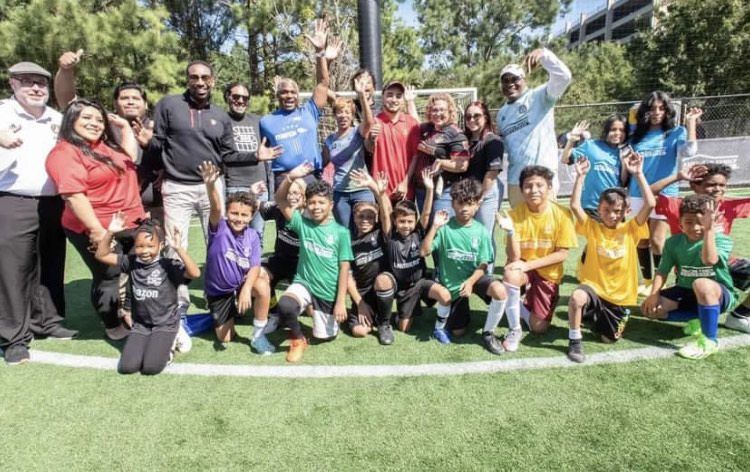 MARTA and Soccer in the Streets, along with the City of Atlanta and the Atlanta United Foundation held a community celebration and soccer tournament to mark the official opening of StationSoccer at Lindbergh Center rail station. The soccer pitch, which is adjacent to MARTA headquarters on Piedmont Rd. in Atlanta opened in 2020 and the celebration delayed due to COVID-19.

“We are excited to officially celebrate StationSoccer at Lindbergh with our valued partners at Soccer in the Streets, the City of Atlanta, and the Atlanta United Foundation,” said MARTA Interim General Manager & CEO Collie Greenwood. “This is a meaningful location for us as it sits right across from our headquarters, and we wanted to ensure the players, stakeholders, community members, and MARTA employees had an opportunity to celebrate the soccer pitch and the entire StationSoccer program.”

The brainchild of Soccer in the Streets, StationSoccer is a citywide project to create a network of soccer fields connected by MARTA, eventually forming a ten-station league that’s affordable and easily accessible by transit. StationSoccer was launched at Five Points Station in 2016, resulting in the first soccer field in the world built inside a transit station, and has since expanded to West End in 2018, East Point in 2019, and most recently Kensington Station this June.

“Atlanta is a soccer town, whether it’s played at Mercedes-Benz Stadium where we’ll host the 2026 FIFA World Cup, or at our MARTA stations across the city,” said Atlanta Mayor Andre Dickens. “StationSoccer is a unique and innovative collaboration to bring recreational opportunities to every part of our great city. I am excited we are officially opening StationSoccer at Lindbergh Center Station, adding to our four existing pitches and many more to come.”

“This was the moment we have waited for, StationSoccer Lindbergh was built during the pandemic and while COVID limited us in our capacity to fully program like we would have desired, we are so happy to be able to officially launch the fields in such a unique way with new program partners in addition to our original founding partners. Most importantly, we hope the communities in and around Lindbergh will have enjoyed this day and look forward to many more at their new StationSoccer fields,” said Sanjay Patel, Director of Strategic Projects, Soccer in the Streets.

“Lack of access should not be a factor for youth wishing to play soccer,” said Marissa Ahrens, Atlanta United Director of Community Engagement. “Station Soccer makes the game accessible to youth across the city of Atlanta, and the Atlanta United Foundation is delighted to support the program as a Founding Partner.”

The StationSoccer program will continue to expand over the next few years, with plans for fields at Doraville, East Lake, Bankhead, H.E. Holmes, and Civic Center rail stations, completing the “League of Stations.” To learn more visit StationSoccer™ – The Story — Soccer in the Streets (soccerstreets.org)