When Sam Massell got fired, it set him on a path that helped shape Atlanta 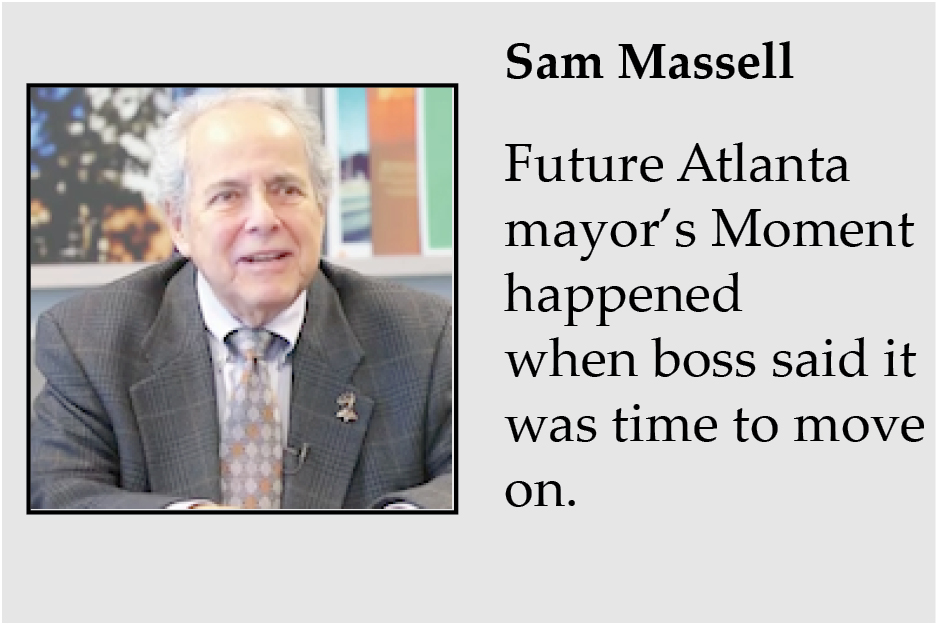 When a young Sam Massell went in to see his boss, the future mayor of Atlanta thought he was in line for a big raise. Instead he got fired for all the right reasons and it was one of the best things that ever happened to him – and our city.

As Sam recalls, “I went in shock. At 24, those were heavy words.” He tried talking his boss into keeping him, reciting all the excellent work he had done for the trade association during his two years as its chief of publications, but it was all for naught. Instead his boss urged him to go into real estate, “the real market in this city.”

Two days later, Sam applied for a job at Allan-Grayson Realty, then one of the larger brokerage firms in the city. It was, after all, in his blood. His uncle, Ben Massell, is remembered for building 1,000 buildings in Atlanta, a fact that led Ivan Allen, Sr., father of the man who preceded Sam as mayor, to say, “Sherman burned Atlanta and Ben Massell built it back.”

As a Realtor, Sam paid more in income taxes after his first year at Allan-Grayson than he was earning in salary at his first job and he stayed for 20 years, becoming the firm’s vice president and a charter member of the Million Dollar Club. “That money, incidentally, became important because earning a good living made it possible to get into politics. Without that, I could not have afforded full-time political life,” he said.

Sam’s full-time political life turned out to be a great return on investment for Atlanta and the region, as he served eight years as president of the Atlanta Board of Alderman (city council) and four years as mayor beginning in 1969. He not only brought diversity to the mayor’s office (he was Atlanta’s first Jewish mayor), he appointed City Council’s first female member and the first African-American department heads.

He championed the concept of MARTA, helping its tax-funding plan pass in Fulton and DeKalb counties, though it lost in Gwinnett and Clayton. “That was his biggest accomplishment,” Metro Atlanta Chamber of Commerce President Sam Williams told the Atlanta Business Chronicle in 2004. “Without Sam Massell, we might not ever have had MARTA.”

Following his term as mayor (Maynard Jackson defeated him in 1973), Sam ran a travel agency in Buckhead and has served as the founding president since 1988 of the Buckhead Coalition, an invitation-only organization of 100 CEOs who keep a close watch on that part of town where Sam and his wife, Doris, live.

When I called Sam to ask him if he’d participate in “Moments,” I accidentally said the word “traffic” during our conversation, prompting his memorable monologue on why traffic is good. Much like the old Groucho Marx TV show, when a contestant said the “secret word” and a toy duck with a $100 bill would drop from the ceiling, I chuckled as I remembered hearing the same riff when I uttered the word over lunch with Sam years ago.

I should probably get his traffic speech on video as well and play it every time I get unnerved by Atlanta’s famous congestion. It always makes me laugh. Alas, had our metro area followed Sam’s advice more than 40 years ago and made MARTA a truly regional transportation system from its start, we may not have as much reason today for his much-needed comic relief.

Next week in Moments: Ryan Gravel, the visionary for Atlanta’s BeltLine.