Most of Atlanta’s known homeless population has now been tested for COVID-19, thanks to an initiative spearheaded by the city’s homeless services manager Partners for Home (PFH) and healthcare-focused nonprofit Mercy Care.

Of the roughly 3,200 homeless people tallied by PFH’s annual Point-in-Time study, more than 2,400 have been now been tested for the novel coronavirus, supported in part by funding from Fulton County, Mercy Care CEO Tom Andrews told SaportaReport in an interview Wednesday. A few dozen have tested positive, and most of them have been transported to the so-called “isolation hotel,” where officials keep an eye on COVID-19 patients who don’t have anywhere to safely take refuge. Two weeks ago, the facility opened inside an unidentified downtown hotel, officials told SaportaReport earlier this month.

Soon after the isolation hotel opened, the city repurposed another intown hotel — the location of which is also unknown — to provide shelter, food and housing placement services for upwards of 200 homeless people who did not test positive for the disease, but who need assistance during the pandemic. The effort, which has now placed 55 people in the “non-congregate shelter,” was propelled by a $1.5 million investment from the city, as well as matching funds from the philanthropic community.

And more testing is on the way, Andrews said. Starting Friday, officials will begin retesting some of the individuals who previously tested negative for the virus, as well as reconnecting with shelters with a higher-than-average number of cases. They’ll also make a concentrated effort to better engage the city’s unsheltered population, especially on the Westside, Andrews added.

Atlanta City Councilman Antonio Brown, who’s experienced homelessness himself in the past, applauded the city’s efforts to test the local indigent population, but he said far more work must be done to address the plight of these people during the public health crisis.

At Hartsfield-Jackson International Airport, for instance, homeless people have been sleeping near the baggage claim area, many of them arriving by MARTA train. This is not uncommon; many homeless folks take shelter there during the colder months. The pandemic, however, has boosted the number of people bedding down there lately, according to a new council resolution proposed by Brown.

“The City of Atlanta and [HJIA officials] do not want to criminalize those who are experiencing homelessness,” the legislation says. “However, people are not allowed to lodge at the airport, and the City desires to provide them with appropriate services.”

Brown said in a recent interview with SaportaReport that MARTA police officers have been turning homeless people away from train stations as part of an effort to keep them from congregating at the airport. The move, he claimed, makes it tougher for homeless people to access services provided by HOPE Atlanta, a local homeless advocacy group.

MARTA officials, however, said Brown is misinterpreting a practice the transit agency has had in effect for years — clearing train cars of people without Breeze cards or those with no discernible destination. Lately, MARTA police have been concentrating those sweeping efforts at the Garnett train station, which sits just south of the cruciform transit network’s central point, the Five Points stop, on the way to the airport. Once intercepted, people are directed to services via HOPE Atlanta and Partners for Home.

Brown, though, also expressed concern that some of the city’s partners in homeless advocacy aren’t well enough equipped with personal protective equipment (PPE). He said he plans to donate 300 masks and 300 pairs of gloves to HOPE Atlanta on Thursday, and he plans to dole out hundreds more masks and gloves to other organizations in the near future. 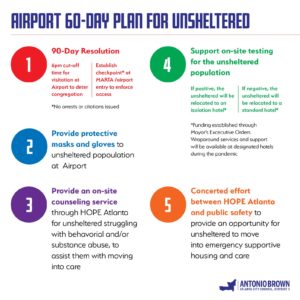 The councilman’s new legislation calls for the establishment of a 60-day plan “for addressing the impact of the COVID-19 Pandemic on individuals experiencing homelessness who congregate at Hartsfield-Jackson Atlanta International Airport.”

If approved by the city council, the measure would dissuade police from arresting people sheltering at the airport and encourage the launch of an on-site COVID-19 testing facility. Testing people at the airport, the logic goes, would curb the number of people who might otherwise cramp together in shuttles to get to supportive services and testing.

The legislation passed the council’s transportation committee on Wednesday and could go to a full-council vote on May 4.