New Arizona immigration bill comes at a cost to the state

Despite claims by some legislators in Phoenix, the majority of Latinos Arizona do not support the stringent new immigration bill that recently was signed into to law by Gov. Jan Brewer.

“That’s a bald-faced lie,” said Daniel Ortega, chairman of the National Council of LaRaza and a leading critic against the new bill. “I challenge any one to show me those statistics that the Latino community supported this measure.”

Ortega was speaking Friday morning to the LINK delegation of Atlanta leaders meeting in Phoenix. It was an equal time moment, because Thursday morning, one of the sponsors of the new bill, Russell Pearce, had made a passionate case in favor of the new immigration law. 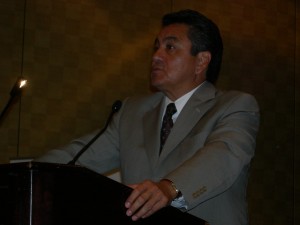 The two men were supposed to have been on the stage together, but car trouble prevented Ortega from being able to arrive in time on Thursday morning.

Ortega said it was important to be careful in “what we say and how we say it” when having the great immigration discussion.

“There’s no debate that our current immigration system is broken,” Ortega said. “We have to commit to having a debate to fix this system, and we can not fix it with hate or dehumanization.” 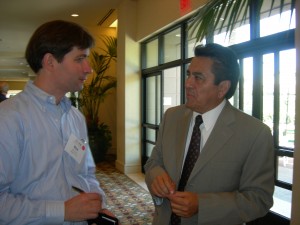 Instead, Ortega said one must recognize that the “current system clearly does not fulfill the need that this country has for labor.”

Unfortunately, Ortega said that Arizona has become the “epicenter” and “ground zero” of the debate of undocumented immigrants.

And Ortega said the issue has exploded in Arizona because “the federal government has failed us all.” Because the country has not implemented immigration reform, giving existing residents a path to citizenship, the system is broken. 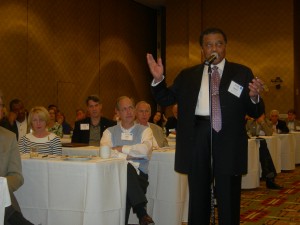 In some areas, Ortega and Pearce agree. “We’ve got to get rid of the criminal element,” Ortega said. “We have to have employer sanctions” if they hire illegal immigrants.

But the solution is not subjecting one group — Latinos — to extra scrutiny because that only will invite racial profiling, Ortega said.

Asked about the economic impact of the bill, Ortega said the fallout has only just begun. There will be more boycotts and more cancelations of conventions and visitors coming to Arizona.

“We clearly are the laughing stock of the nation,” Ortega said, adding that it also will impact whether companies invest in the state. “The first we have to do is find a way to defeat this law.”

Ortega said he already is joining in a legal effort to challenge the bill and “the courts hopefully will take care of it.”

But it will take a long time to get rid of all the jokes and erase the economic damage the bill has caused the state. But that can be minimized if the implementation of the law is stopped, Ortega said.

Arizona native and public policy expert, Grady Gammage, said that controversies like the immigration bill are not new for Arizona. It was the last state to implement a state holiday to honor Martin Luther King Jr., and it just passed a bill that any one running for president must be able to present his or her birth certificate before their name can be included on the Arizona ballot. The immigration bill is just more of the same.

“We have a penchant for shooting ourselves in the head,” Gammage said. “Every few years, we have to look like the stupidest people in the United States. I’m very concerned that this is giving the United States a chance to turn Arizona into a whipping boy.”

The point seemed to hit home for the Atlanta leaders visiting Phoenix.

During the closing exercises of the LINK program, a consistent theme was that state leaders must be careful to guard against similar actions in Georgia. Instead, metro Atlanta and Georgia are known for being inclusive and tolerant of different races and ethnic groups.

At a minimum, the metro Atlanta leaders recognized that there’s an economic cost to passing laws that discriminate against any group of people living in our state.

Previous Article
Column: Genuine Parts coming through a tough time
Next Article
Atlantan’s Must Continue to Uplift the Voice of the Voiceless