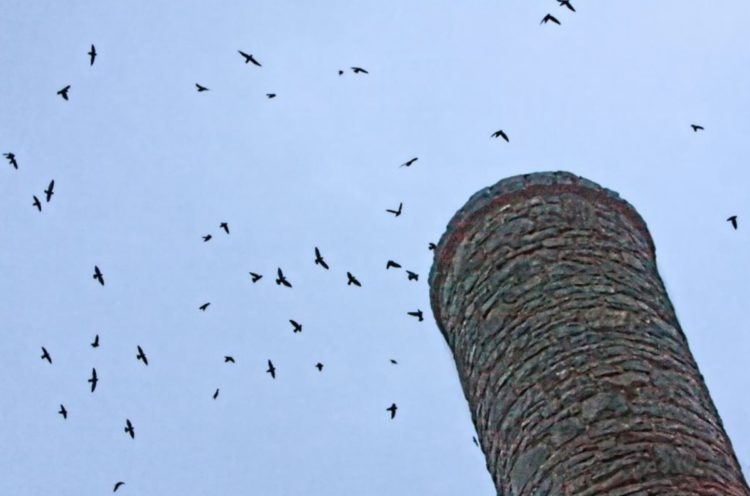 The Atlanta Audubon Society has embarked on addressing a housing crisis encountered by the once-common chimney swifts – a lack of nesting places in tree cavities and the chimneys that gave the birds their name. 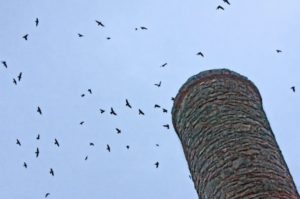 As trees with cavities fall or are cut down, and as chimneys are capped, chimney swifts are running out of places to call home. And not just in Atlanta.

The number of chimney swifts in the United States fell by 53 percent between 1966 and 2007, according to a report by audubon.org. The current population is thought to be about 15 million, nationwide. The situation in Canada is more dire – the chimney swift population has dropped by 90 percent during the same period.

The Atlanta Audubon Society has broken ground on a chimney swift tower that’s to stand 24 feet high. It’s located in Piedmont Park, in the Piedmont Commons, as part of the Bird-Friendly Habitat Educational Exhibit being built along Clear Creek in the Native Plant Demonstration Garden.

The tower will join a small but growing number of chimney swift towers arising in other cities. The Wake Audubon Society, in Raleigh, N.C. opened a 30-foot tower in 2015 that was expected to house 5,000 chimney swifts, according to a report. The Texas A&M sells a do-it-yourself guide on how to build a backyard chimney swift tower. The book is priced at $12.95.

The Atlanta Audubon Society is fully funding the project at Piedmont Park. Proceeds come from a private donation and a National Audubon Society Burke Conservation Grant.

The habitat exhibit is being built through a partnership of the Atlanta Audubon Society and the Piedmont Park Conservancy. The project is to be complete in September and dedicated in a ceremony that coincides with the first Georgia Grows Native for Birds Month. 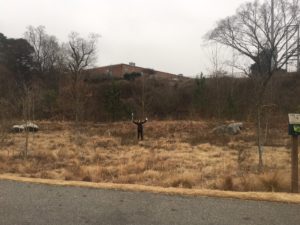 “The Bird-Friendly Habitat Educational Exhibit at Piedmont Park is an exciting demonstration of how Atlanta Audubon and parks groups can work in partnership to meet the needs of both people and wildlife,” Nikki Belmonte, Atlanta Audubon Society’s executive director, said in a statement.

“The installation of a native plant garden and Chimney Swift tower will bring visitors to this serene area of the park, offer multiple educational opportunities, and provide relevant and necessary conservation actions for our birds,” Belmonte said.

The tower is being designed by John Monnat, a Seattle-based architect with experience in parks and recreation. Pierre Coiron, with Decatur-based Stability Engineering, is collaborating with Monnat.

Once the tower is complete, Piedmont Park Conservancy and Atlanta Audubon intend to develop interpretive signage and educational programs to accompany the project. One such program could be a chance to watch the chimney swifts as they gather in large flocks before entering their roosts in the tower.

This program is envisioned to be part of a broader offering at the new habitat exhibit. The exhibit is to have two components – a garden of native plants that is to provide a quality bird habitat in the park, and the tower, which is being built specifically to house chimney swifts. The two components are to provide educational opportunities as they speak to the importance of urban greenspaces in promoting biodiversity, according to the statement.

Chimney swifts are regarded for their acrobatic flying skills as they seek food – up to 1,000 insects a day including flies, mosquitos, wasps, ants, and other insects caught in flight.. The migratory birds breed in Georgia in springtime and summer, according to the Atlanta Audubon Society.