Operation HOPE welcomed to Atlanta with hopes of greater equity 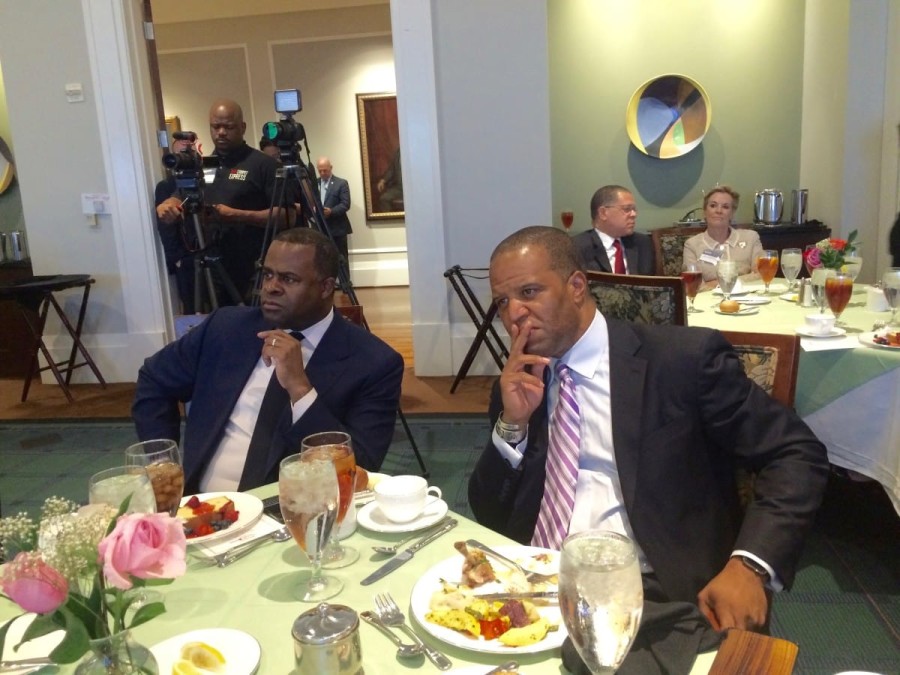 The welcome luncheon was held Monday at the Federal Reserve of Atlanta, a rather elegant setting to talk about poverty along with financial inclusion and literacy. Operation Hope also announced Atlanta Uplift 2020 – to help make it a model city of lifting people out of poverty. 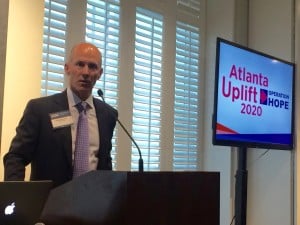 Rick Smith, the CEO of Equifax, announced that his company would be working with Operation HOPE on the westside of the city to create a financial capability center. Operation HOPE “helped us shape our thinking about giving back,” Smith said.

“His passion and dedication is unparalleled,” said Rogers, who added that financial institutions have a vested interest in partnering with Operation HOPE. “Three-quarters of Americans are living paycheck to paycheck. One-third are not paying their bills on time. The economic recovery is fragile, and the language of money is critical. The leading cause of stress is the lack of financial wellbeing.”

Bryant, who founded Operation HOPE in Lost Angeles after the Rodney King riots, said he was drawn to Atlanta by its civil rights history – especially by the teachings of the late Martin Luther King Jr. and former Atlanta Mayor Andrew Young, who has become Bryant’s mentor. 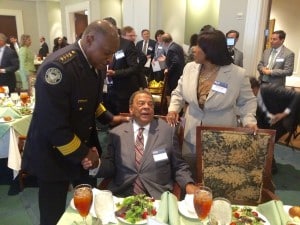 “Dr. King’s work is unfinished,” Bryant said. “We are going to do our part.”

Seeking verification from  luncheon guest Bernice King, the CEO of the King Center, Bryant said MLK was launching the Poor People’s Campaign in 1968 when he was assassinated in Memphis. That’s when Bryant acknowledged the presence of Bryan Jordan, the chairman and CEO of Tennessee-based First Horizon National Corp., who also was at the luncheon. His bank is also a partner with Operation Hope.

To hit the point home, Bryant quoted King when he was talking about the Poor People’s Campaign.

“You cannot legislate goodness, and you cannot pass a law to force someone to respect you. The only way to social justice, in a capitalist country, is through economic parity (ownership).”

In every community where there are payday lenders, liquor stores and check-cashing businesses – whether it be in urban or rural America, Bryant said, “there is untapped potential” among the residents. 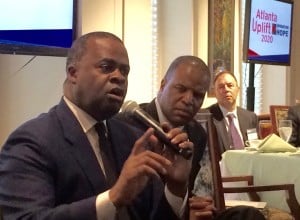 “Nothing changes your life more than God and love and moving your credit score by 120 points,” Bryant said.

“The whole credit score business and financial literacy is an international problem,” explained Andrew Young. “I wanted John to come here because he belongs here…. We have to bring the power of the streets into the mainstream of the American economy. It is what the nation needs. We are going to have to go international. We are just getting started.”

Atlanta Mayor Kasim Reed said the topic of equity is going to have to be front-and-center in the city.

“It’s in our selfish and moral interest to make sure we don’t have a bunch of people with their face up against the glass,” Reed said. “We have to figure out how to engage these folks.”

But Reed went on to stay that establishing 100 Operation HOPE centers in Atlanta is a good place to start.

Operation HOPE has centers inside of bank offices, hotels and on May 19, it will open a center in the Atlanta Police Department’s headquarters to help officers and staff who need financial help. In all, the goal is to have 1,000 HOPE centers across the country by 2020. 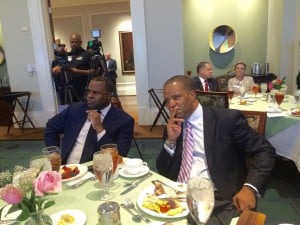 Bryant said a center working with a bank customer to improve credit scores, ends up with everyone winning.

“Banks don’t want to be in the ‘no’ business,” Bryant said. “They would love to say ‘yes.’ But they can’t say yes to someone with a 500 credit score – no matter how nice they are.”

An interesting exchange occurred with Lockhart asked Mayor Reed if he would push for a minimum wage increase inside the city limits.

Reed said the city already has moved the minimum it pays its workers to $10.10 an hour. But he stopped short of saying he would trying to make that uniform among all businesses in the city. Reed said such a move would have to be accepted by the the state legislature, and the “politics would be extraordinarily damaging and hard.”

Meanwhile, Reed said another major issue is to make sure Atlanta remains affordable for teachers, firefighters, police officers and millennials who want to live in the city. But Reed said Fulton County and other governmental entities that provide subsidies to developers need to require that a percentage of the housing units are affordable. 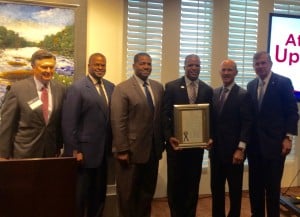