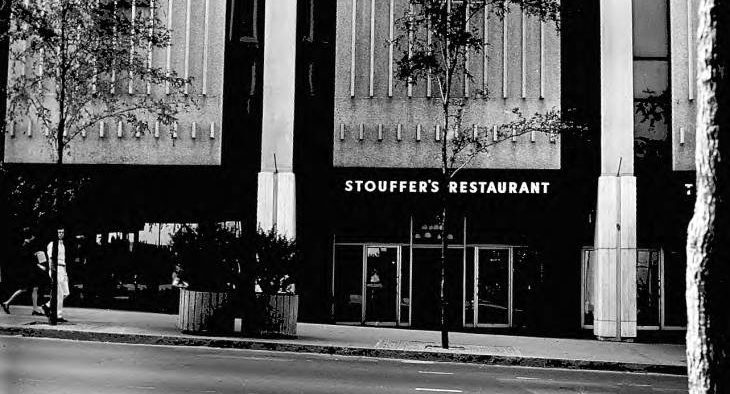 When John C. Portman Jr. began developing Peachtree Center back in 1960, non-violent protests for racial equality were spreading across Downtown Atlanta, led by Lonnie King of the Atlanta Student Movement.  With this and other social movements as backdrops, John Portman knew that the experience of American downtowns needed to change and decided that Downtown Atlanta would be his laboratory and playground. Atlanta allowed Portman to experiment, creating his Coordinate Unit Theory that focused on pedestrians within connected downtown developments.

The foundation of Peachtree Center is The Atlanta Merchandise Mart (currently known as AmericasMart Atlanta). The Mart was big, new, experimental and the largest “all-electric building” ever built. Opening with the mart were the first two new restaurants to open as integrated in the United States, Stouffer’s and The Top of the Mart. These restaurants, both part of a larger chain, welcomed five Georgia Tech African exchange students on October 13, 1961, just before the building’s grand opening, effectively integrating the restaurant. In this way, Portman and team ensured there would never be any sit-ins at Peachtree Center.

This ongoing desire for change in American downtowns continued in 1967 with the opening of the spectacular new Hyatt Regency Atlanta, with its inspiring massive atrium that welcomed the Martin Luther King Jr.-led Southern Christian Leadership Conference for its final meeting in Atlanta with Dr. King.

John Portman continued expanding Peachtree Center,  building a completely gas-powered building for the Atlanta Gas Light Company across from the all-electric Merchandise Mart, and then opening the Midnight Sun restaurant, which hosted regular meetings of the Atlanta Action Forum, with both John Portman and Lonnie King as charter members, working behind the scenes to improve economic and political equality for all Atlantans.

The development of Peachtree Center’s other two signature hotels, the Westin Peachtree Plaza and the Marriott Marquis, allowed Atlanta to attract events like the 1996 Centennial Olympic Games.  Today, events like Dragon*Con illustrate the ongoing success of the Coordinate Unit Theory, connecting multiple areas of Downtown Atlanta in one celebration.

Together we look forward to seeing what comes next for Downtown Atlanta at Peachtree Center.

Complete information about the photo can be found here: https://digitalcollections.library.gsu.edu/digital/collection/lane/id/8538/rec/1