There is something liberating about casually strolling down the middle of Peachtree Street as out-of-towners standing on the sidewalk gesture with an air of perplexity.

Rain aside, hundreds of Atlantans joined together this past Sunday to celebrate another Atlanta Streets Alive, the first on our city’s signature street – Peachtree.

From downtown to Midtown, families and friends walked, cycled and skateboarded up and down the street sans cars. Along the nearly three-mile route were food trucks, outdoor games and plenty of familiar faces greeting each other and sharing in the communal spirit of Atlanta Streets Alive.

During the event, I met a family of five that had recently moved to the city from London and happened to stumble upon the festivities. With their three young boys in tow, the parents asked if these types of activities were the norm for our city – to which I and others replied, “Not quite but we’re getting there.” 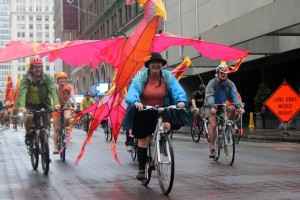 And we are getting there.

Year over year, Atlanta Streets Alive gains popularity and interest from the general public and corporate sponsors. This year, for the first time, Atlanta Mayor Kasim Reed pledged the city’s financial support for the program. Businesses along the Peachtree route welcomed participants with open arms.

More than just a fun experience twice a year, the real value of Atlanta Streets Alive is it continues to force us all to challenge our every day access to our roads, sidewalks and transit.

Additionally, increased support for our sidewalk infrastructure is needed across the city. At last week’s public hearing on the fiscal year 2014 budget, an overwhelming amount of public comments were from green space advocates.

Only one person stood up to request the city invest more money in tackling our sidewalk infrastructure backlog – which is currently at least $100 million.

When we collectively decide that our quality of life is important to financially support, that’s when we will truly be liberated.