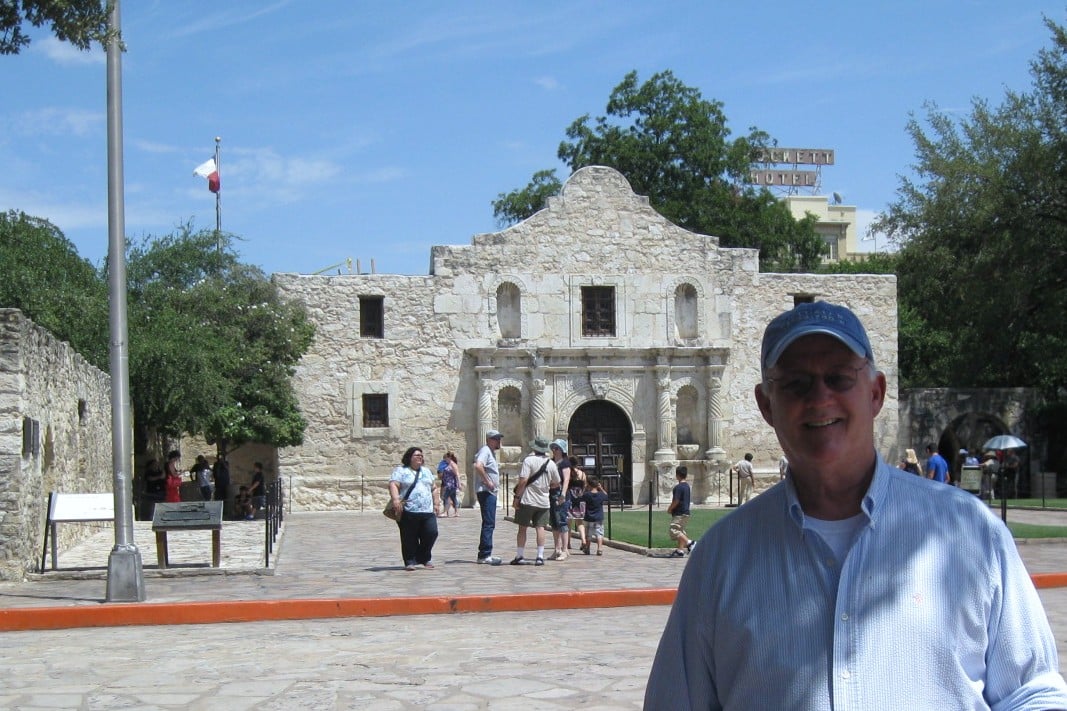 This week, JOSEPH H. KITCHENS, executive director of the Funk Heritage Center at Reinhardt University in Waleska, remembers a group of Georgia soldiers who made the ultimate sacrifice.

Last summer, Jamil Zainaldin wrote a column, “Our shared story — are those things that make us New Englanders or southerners more connected than we may think?,” that triggered a “memory debate” between my wife, Karen, and me. It centered on the question of when our visit to the remote town of Goliad in south Texas occurred. It was 2012, we decided. Karen’s brother was ill, and we drove that interminable stretch of I-10 across the Louisiana bayous to Houston to see him in high summer. Towering over the busy port and its oil refineries is the San Jacinto Monument, a tribute to the revolutionaries who created the Republic of Texas in 1836 and to their enigmatic commander, Sam Houston. The Mexican army was defeated when Houston’s own raw and restless men acted without orders and attacked. Their cry was “Remember the Alamo; remember Goliad.”

We ascended the monument aboard an elevator that was still new when Franklin Roosevelt was elected president for the third time, in 1940. The door opened upon a panorama that included the battleship Texas, looking no bigger than a canoe from our vantage point 567 feet above it. During our descent, and much to Karen’s surprise, I suggested we visit Goliad, a small town more than 150 miles to the southwest in the flat prairies of the cattle kingdom along the lower San Antonio River. I explained to her that it was where the “Georgia Battalion” had fought in the Texas Revolution. I overcame her slight reluctance by promising a stopover on Galveston Island to feel the gulf breezes and walk in the surf. 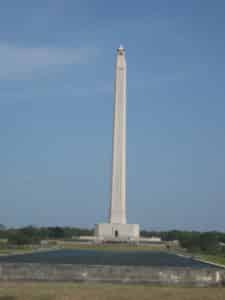 Leaving Galveston behind the next morning, we were met by a wall of fierce heat and drought — the driest summer in anyone’s memory. The grazing was meager, and white-faced steers were being shipped out to market, far short of their usual weight. Newspaper reports told of horses and cattle being put down because feed and water were both expensive and scarce. We were in search of history in a desperate land.

We spent the next night in Victoria, a bustling little city with a shopping center and the usual fast food restaurants. We left for Goliad Sunday morning and found it a sleepy town of 2,000, looking unchanged for the past 75 years. Church parking lots were filled with cars, and businesses were closed for the Sabbath.

Signs directed us out to Presidio La Bahia, a fort built by the Spanish in the 18th century, a lonely sentinel guarding the Spanish frontier from the Rio Grande to the Mississippi. Here, volunteers, including about 30 Georgians, gathered under the command of Georgian James Walker Fannin Jr., a West Point dropout turned slave trader (and the namesake of Fannin County). Hopelessly posted to stop an enormous Mexican army, they waited on reinforcements from the Alamo that never came. When the Alamo fell, General Sam Houston ordered Fannin to move his forces north to Victoria. 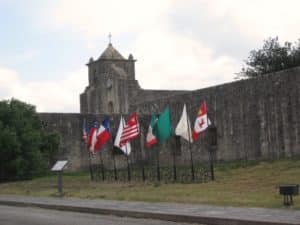 Fannin hesitated for days, then began a withdrawal across open ground toward Coleto Creek and its covering trees. His little army was overtaken by an overwhelming Mexican army, and after a brief but determined resistance, Fannin surrendered. The able and wounded were taken back to the Presidio La Bahia under promise of fair treatment, expecting to be paroled at New Orleans. Instead, they were marched out the next morning and shot by General Antonio Lopez de Santa Anna’s troops. Fannin was accorded an officer’s death, shot as he was seated in a chair in the courtyard.

A few escaped to tell the story,  but more than 200 men were killed. A great cry of angry revulsion swept across the plains and bayous back to the United States and beyond. Santa Anna’s reputation as a pompous, petty tyrant was transformed into that of a cruel monster, and support for Texas and its revolutionaries swelled. Independence was won when Santa Anna was defeated and captured at San Jacinto. 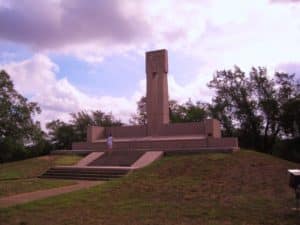 Fannin Memorial to those who died at Coleto Creek and La Bahia. Photo by Joseph H. Kitchens

In a great show of pride, Texans celebrated their centennial in 1936, erecting monuments and markers and organizing reenactments. Georgia had given weapons to the “cause of ’36” and never sought repayment, the story goes. The Texas governor offered to ask the Texas legislature to appropriate money for that purpose, but was told instead to honor the dead, including the Georgia volunteers. A monument was erected at Goliad bearing the names of the Georgians and their fellow volunteers.

We ended our visit to Goliad and La Bahia by walking the steps up to the great monument erected near the site of Fannin’s defeat at Coleto Creek. It bears the names of those who died nearby. Far away from the famous Alamo, the much less visited La Bahia stands, restored by a generous benefactor. It includes the beautiful original Spanish chapel where Fannin’s men spent their last night in this world. It is still used by the local Catholic congregation.

Joseph H. Kitchens, Ph.D., is executive director of the Funk Heritage Center at Reinhardt University in Waleska. He enjoys capturing Georgia history in poetry, books, and articles and describes his profession as “giving voice to our past.” The Funk is an official interpretive site for the National Parks Service Trail of Tears.