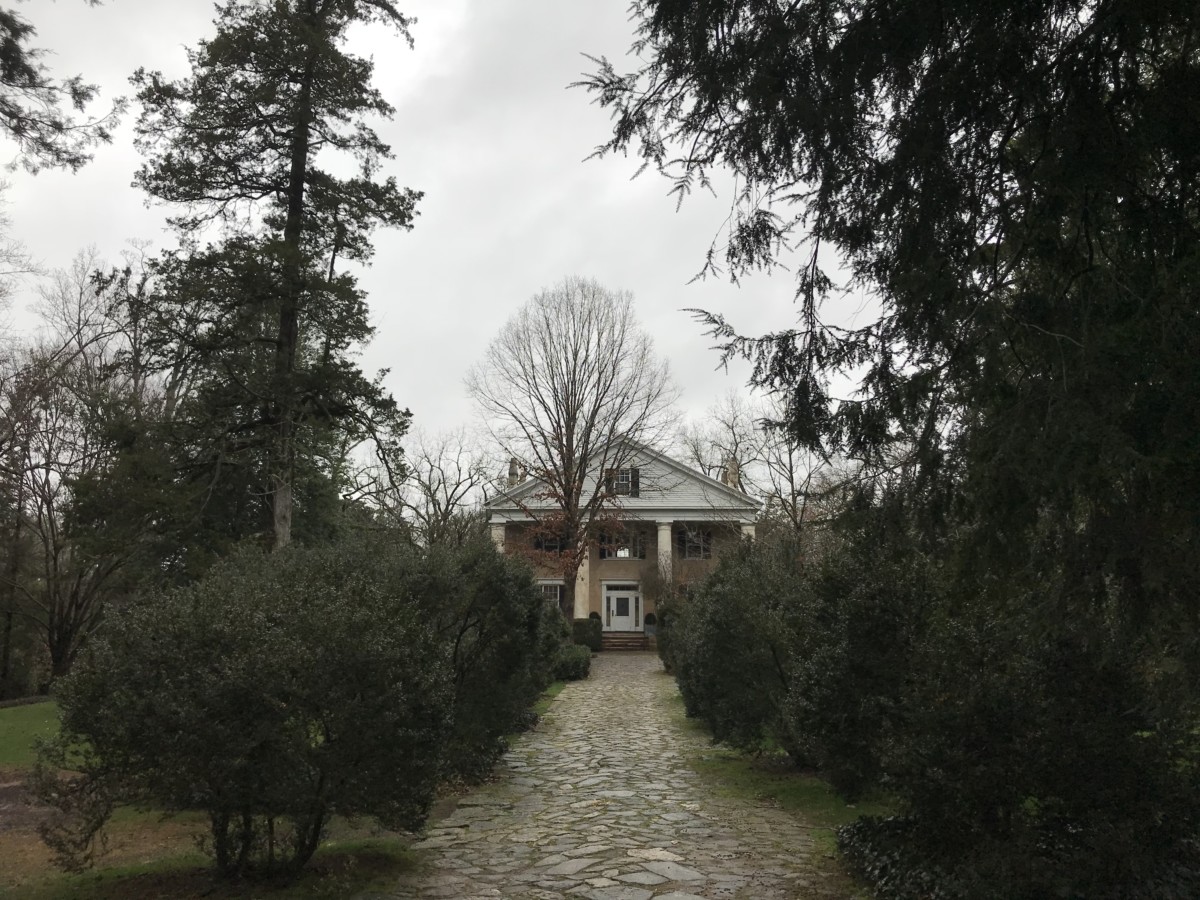 History is being made in Roswell thanks to a cutting edge proposal to preserve the historic Mimosa Hall and Gardens.

The City of Roswell purchased Mimosa Hall, initially built around 1840, as well as its 9 acres of gardens and woods last August for $2.95 million – partly because of a citizen-led effort to save Mimosa Hall and its grounds from being redeveloped. 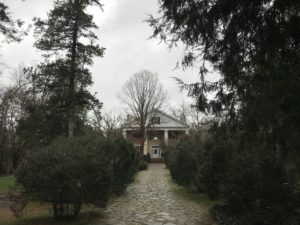 Mimosa Hall had been on the 2017 Places in Peril list of the Georgia Trust for Historic Preservation.

Now the Friends of Mimosa Hall and Gardens organization is proposing to make the historic building the oldest “net zero” building in the United States.

Mimosa Hall would become a sustainable building through the installation of thin solar panels and solar thermal that is integrated into the roof and connecting that power source to batteries that would store the excess solar energy so there would be electricity at night and rainy days.

Most importantly, a sustainable Mimosa Hall would minimize the city’s annual costs to maintain the property.

“We want to remove the burden of maintaining the house in the future,” said Steve Gibson, president of the Friends group and CEO of TalentServed, which has its offices on Bulloch Avenue directly across from Mimosa Hall.

Roswell Mayor Lori Henry was enthusiastic about the plans the Friends group had presented the city for the sustainable renovation.

“It’s a great idea,” Mayor Henry said. “Our historic homes are expensive to maintain. I’ve not seen the downside to it.” 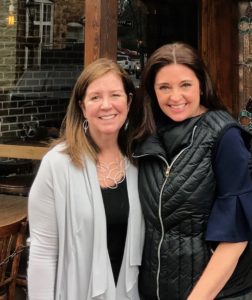 The “net zero” plan was put together by advising architect Simone du Boise, partner in Roswell-based Cadmus Design-Build along with her partner Denise Donahue. They contributed their professional services as part of their desire to find a sustainable solution for Mimosa Hall.

Du Boise described their proposal as “unconventional” because they would be introducing an alternative energy system that will result in a “zero energy building.”

Mimosa Hall will need a new roof, and that will make it possible to integrate the California-made solar panels (as thin as a credit card) in the new roof structure – making them barely visible to future visitors to the Hall. Those panels have a 20-year warranty.

Du Boise also is proposing a cutting edge battery technology by the German company – Sonnen, which has established its U.S. headquarters and manufacturing operations in Tucker. She said Sonnen is offering a 20-year warranty on its product – double most other battery technologies.

In all, the renovation will cost about $135,000, but du Boise said she expects that about half of the total cost will be paid for by federal incentives, credits, donated and discounted services and products.

Du Boise predicted the improvement costs would pay for themselves within one or two years thanks to the energy savings.

“We want to keep and maintain all the energy that we generate,” said Gibson, adding that Mimosa Hall would remain on the power grid. “The city would still have an energy bill – about $30 a month.”

The proposal, however, would give the City of Roswell bragging rights. 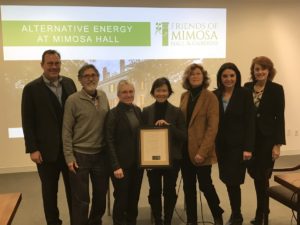 “It would be the first 1840s solar panel house in the country,” Gibson said. “It’s never been done before. It would be the oldest home of its kind that would be net zero. It will be a beacon for similar projects.”

The Friends of Mimosa Hall group, however, still has to raise about $70,000 to implement its sustainable renovation plans.

Because of Mimosa Hall’s amazing history, the Friends group hopes that it will not be difficult to raise those funds quickly so the renovation can be completed later this year. The property currently is closed off to the public until the project is complete, but the City of Roswell hopes to be able to open the gardens maybe as early as this spring.

Mimosa Hall was first built circa 1840 for John Dunwody, one of the founding fathers of Roswell. Within a year, a devastating chimney fire caused its wooden walls to burn down. The house was rebuilt with brick walls and completed in 1846 – giving it the symbol of the phoenix rising from the ashes.

In the summer of 1864, the Union army turned the house into a hospital – destroying the grounds but leaving the house intact. In 1869, the house was purchased by General A.J. Hansell, who had six grown children when he moved in the house with his wife, Caroline Shepherd Hansell, who is said to have given it the name – Mimosa Hall. When she died, her son, William Hansell, who put the house and land up for auction. The bidder was Ada King, who lived in the house fro 1899 to 1918, when she sold the house to renowned Atlanta architect Neel Reid. 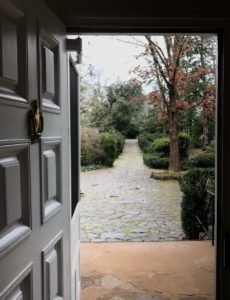 Reid made several alterations on the house – creating a grand parlor out of two smaller ones on the ground floor. He also designed furniture specifically for the house. But most importantly, Reid created the elaborate Mimosa Gardens on the grounds of the property. After Reid died, his mother and sister eventually sold the house to a cotton merchant – Gus Tolson in 1937, and then in 1947 Tolson sold Mimosa Hall to Atlanta lawyer Granger Hansell, the great-grandson of General A.J. Hansell.

Hansell and his wife, Sarah Belle Broadnax Hansell, were devoted to historic preservation. Their son, Ned, and his wife, Sylvia, moved into the house with their two daughters in 1968. One of those daughters, Sally Hansell, inherited Mimosa Hall from her parents in 2012. It was she who sold the house and much of its historic furniture to the City of Roswell in August 2017.

With Mimosa Hall, the City of Roswell now owns four of the seven founding homes of Roswell, according to Michelle Slater, who serves as secretary of the Friends of Mimosa Hall and Gardens. She said she envisions Mimosa Hall being used “morning, noon and night” making it more active than the other historic homes.

“Mimosa is a little different from our other homes,” Henry said. “It’s a living history. It won’t just be a museum home.”

Henry said the city is relying on the Friends of Mimosa Hall and Gardens to help steward the property in the future.

“Mimosa Hall is a beautiful home on a beautiful piece of property,” she said. “For years. we were concerned about what would happen when the Hansells passed away. No one wanted to see it smothered by development.”

(Interestingly enough, directly behind Mimosa Hall, there’s a 20-acre lot of primarily old growth trees that could be “smothered by development,” unless the Roswell community can find a way to conserve the property).

“We’ve got a history of saving historic homes,” Henry said. “Our identity in Roswell is our history. We are over 150 years old. That’s why I love living here.” 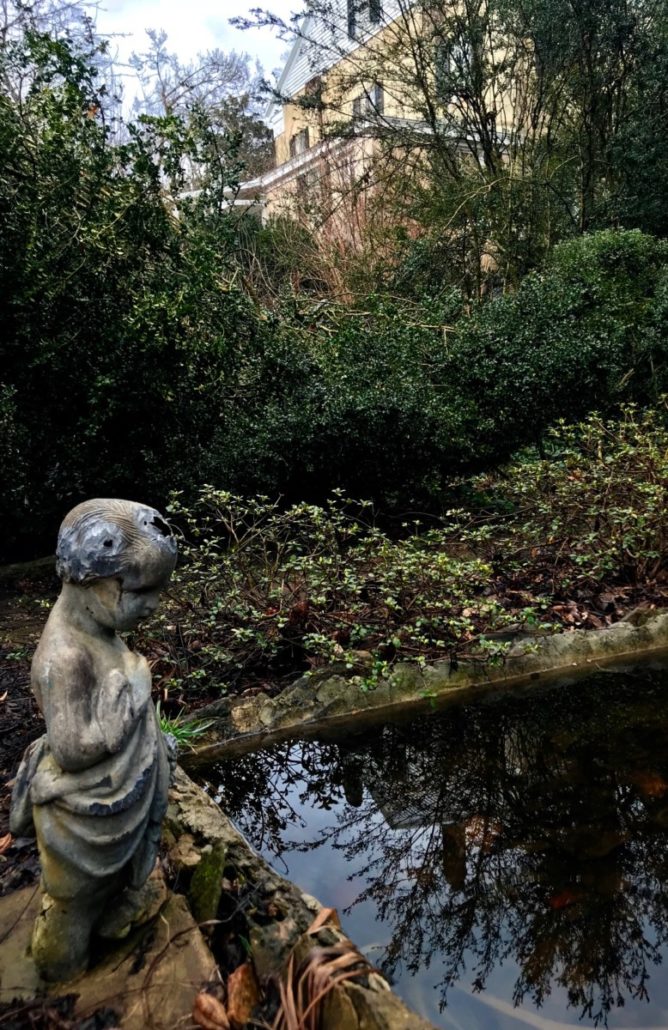 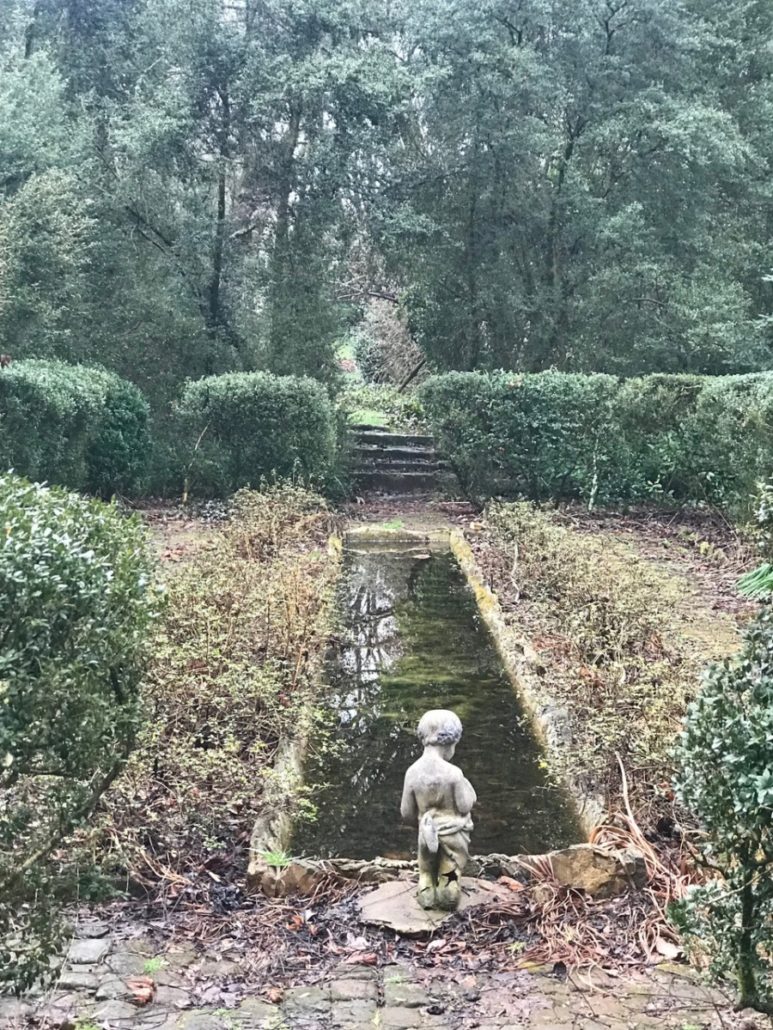 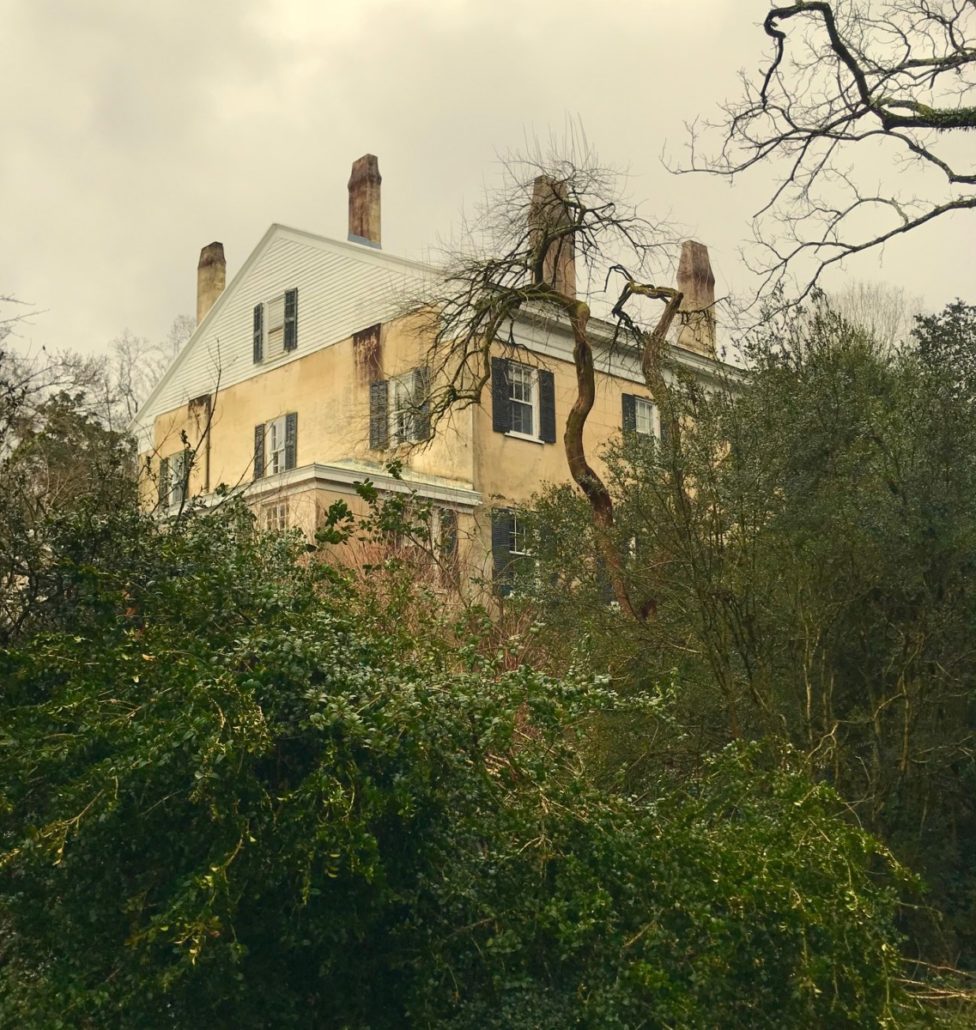 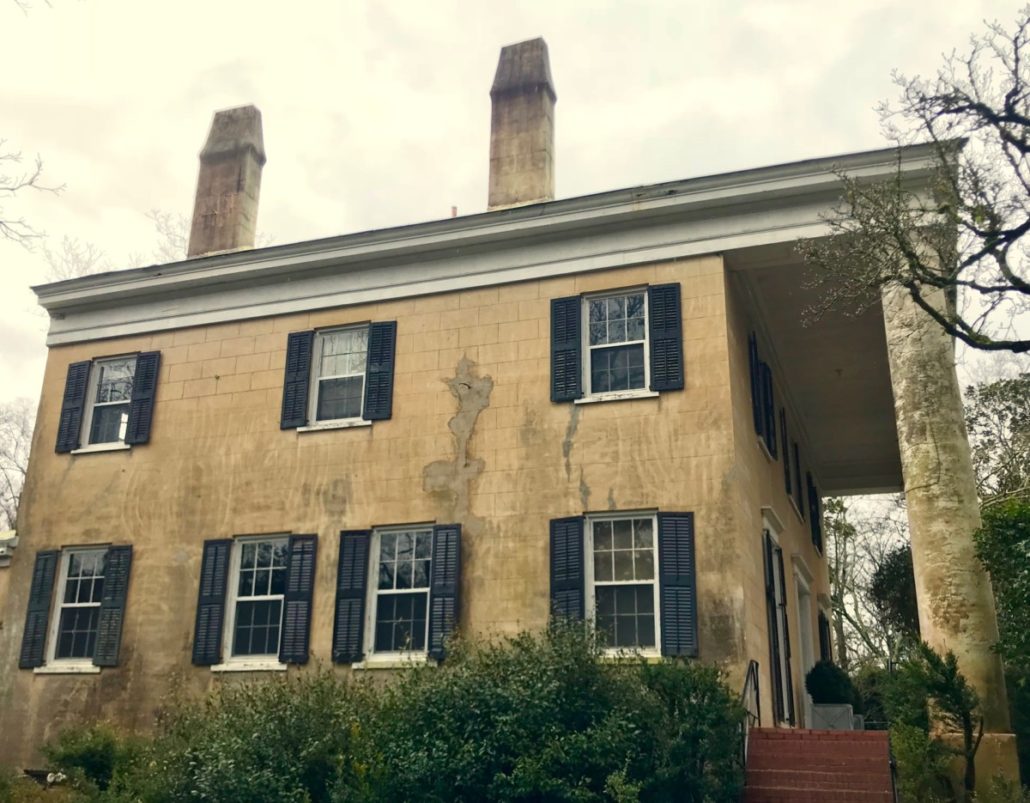 A side view of Mimosa Hall (Photo by Kelly Jordan) 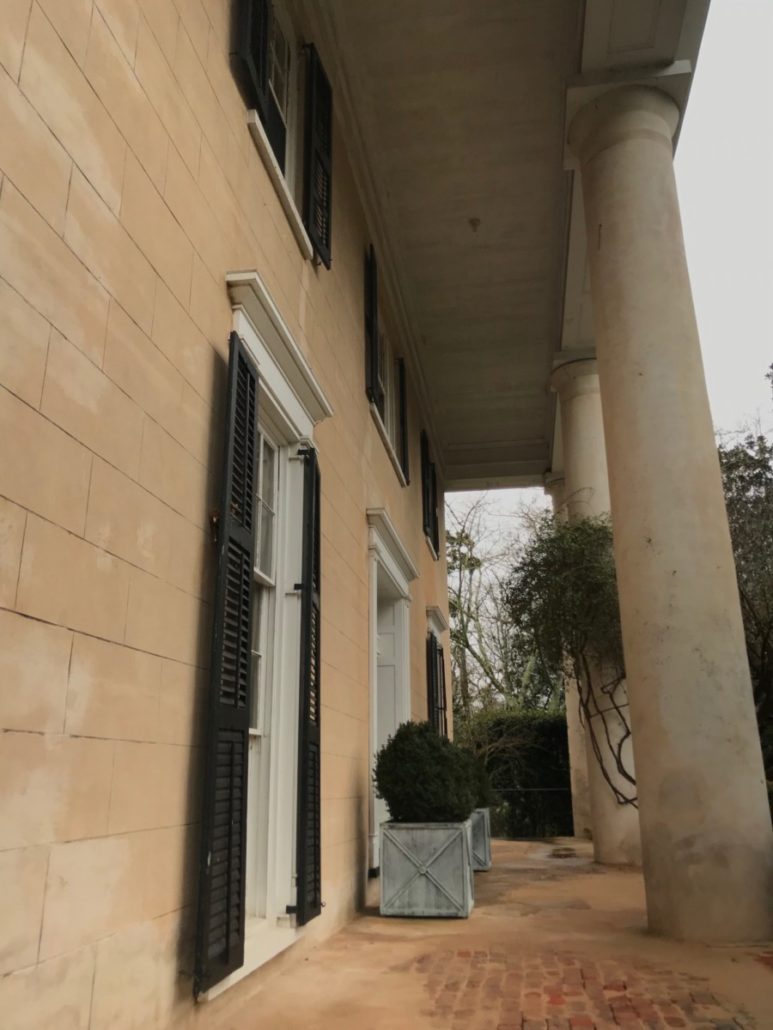 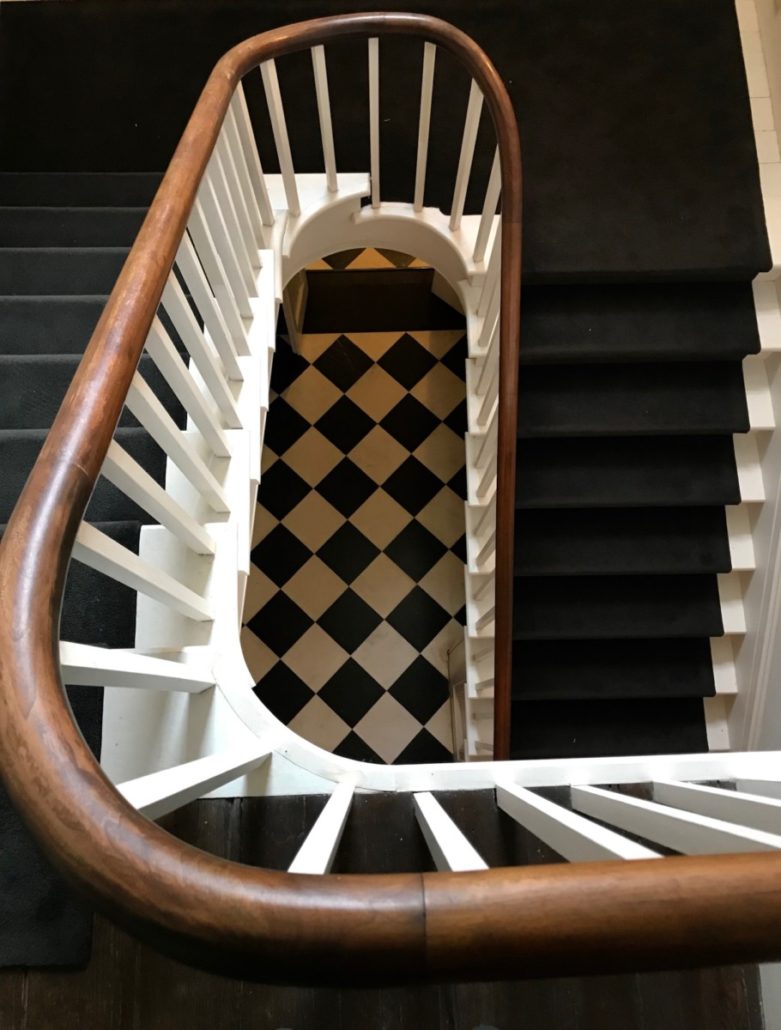 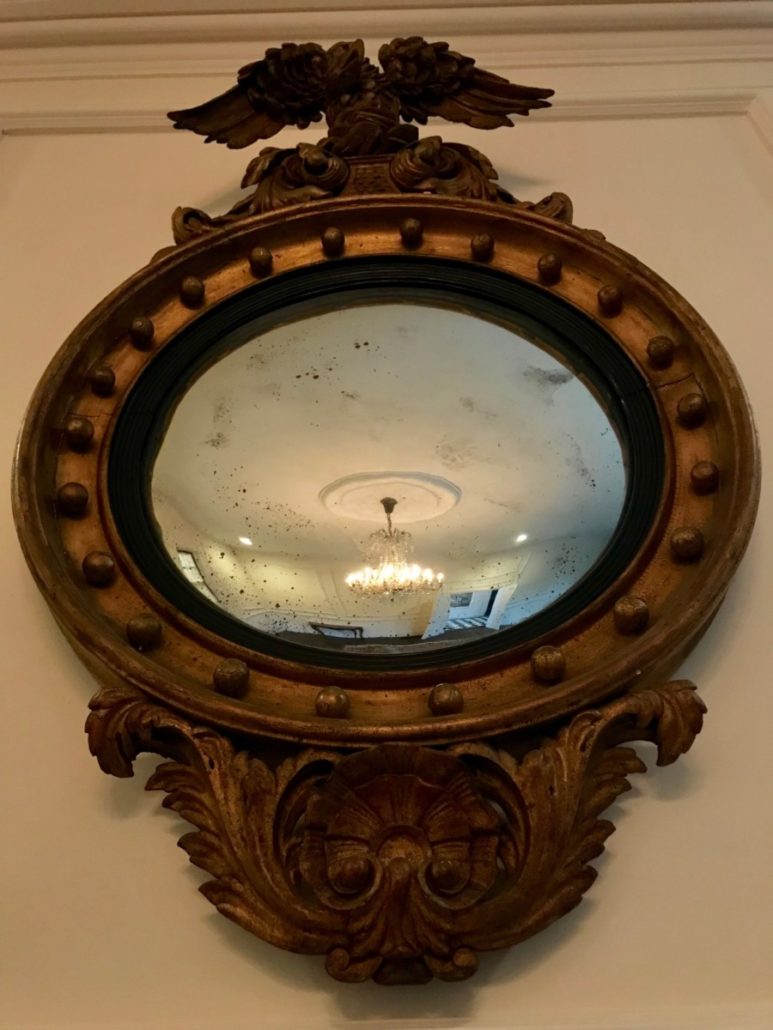 A mirror featured in Mimosa Hall (Photo by Kelly Jordan) 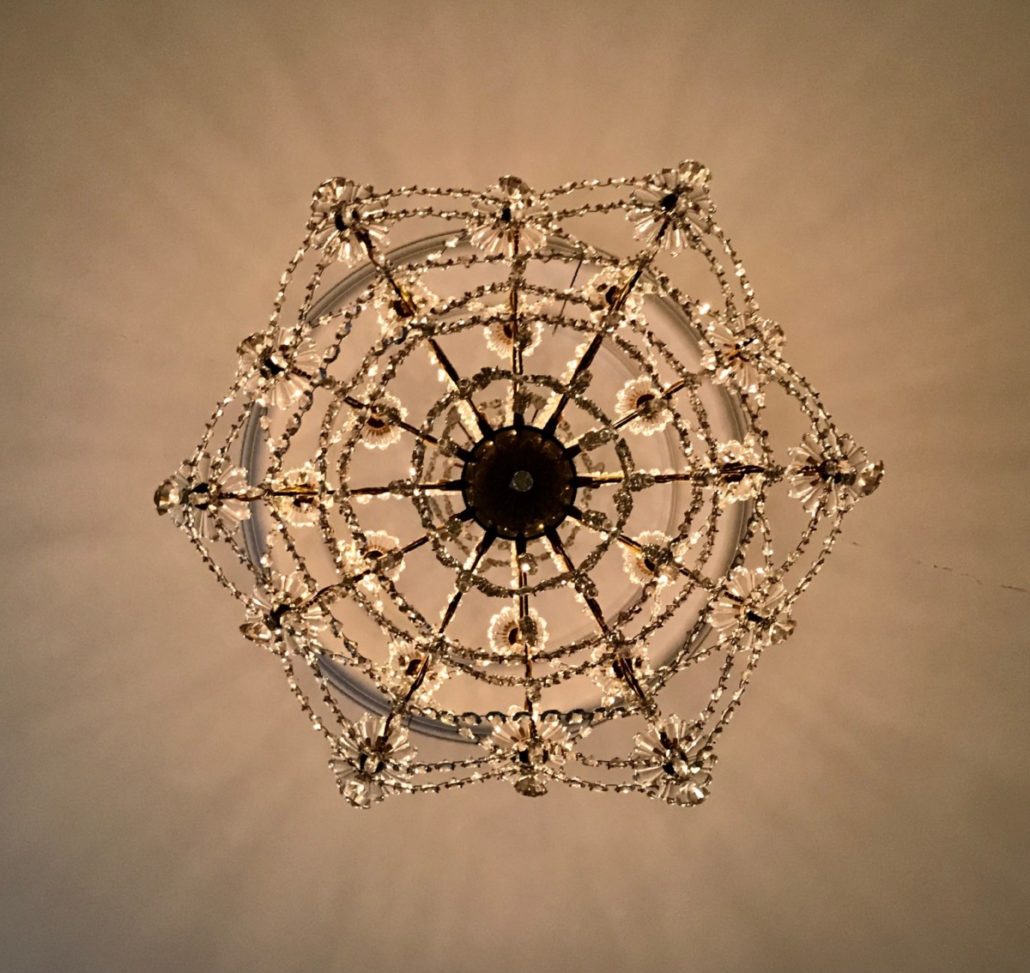 A chandelier in Mimosa Hall (Photo by Kelly Jordan) 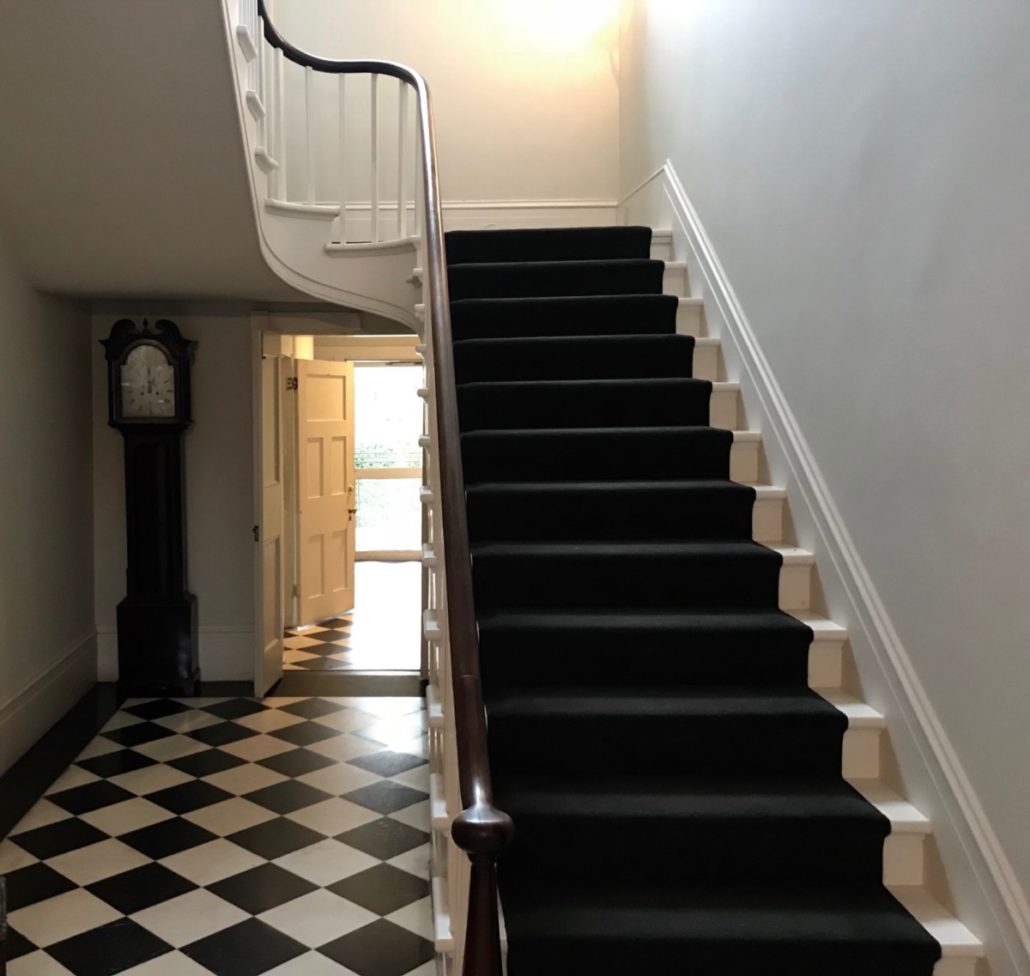 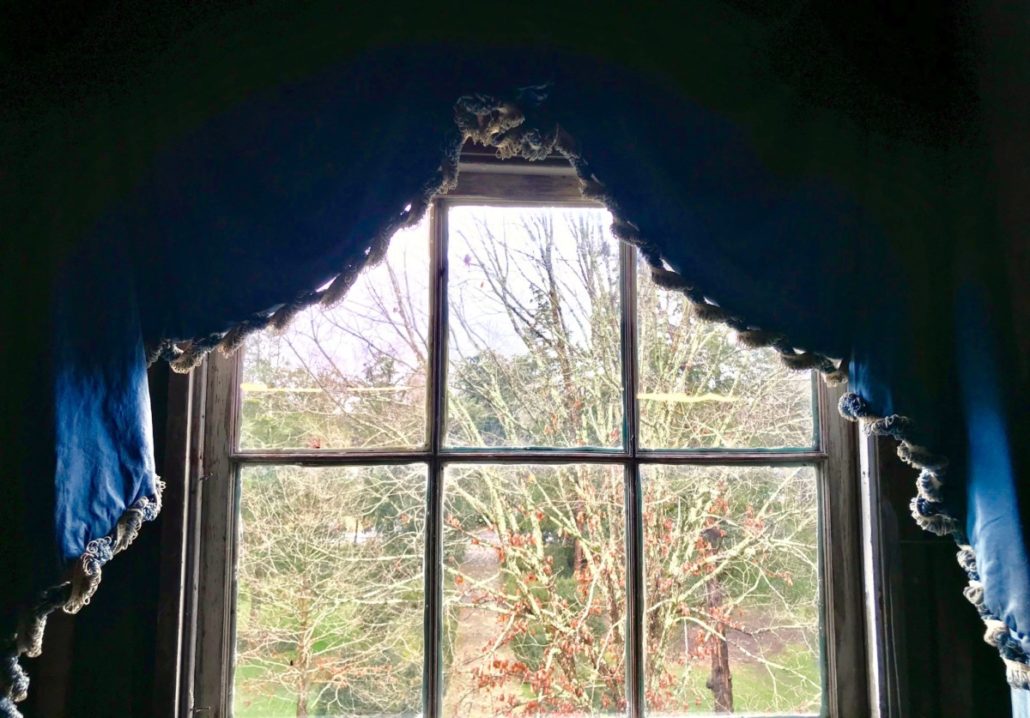 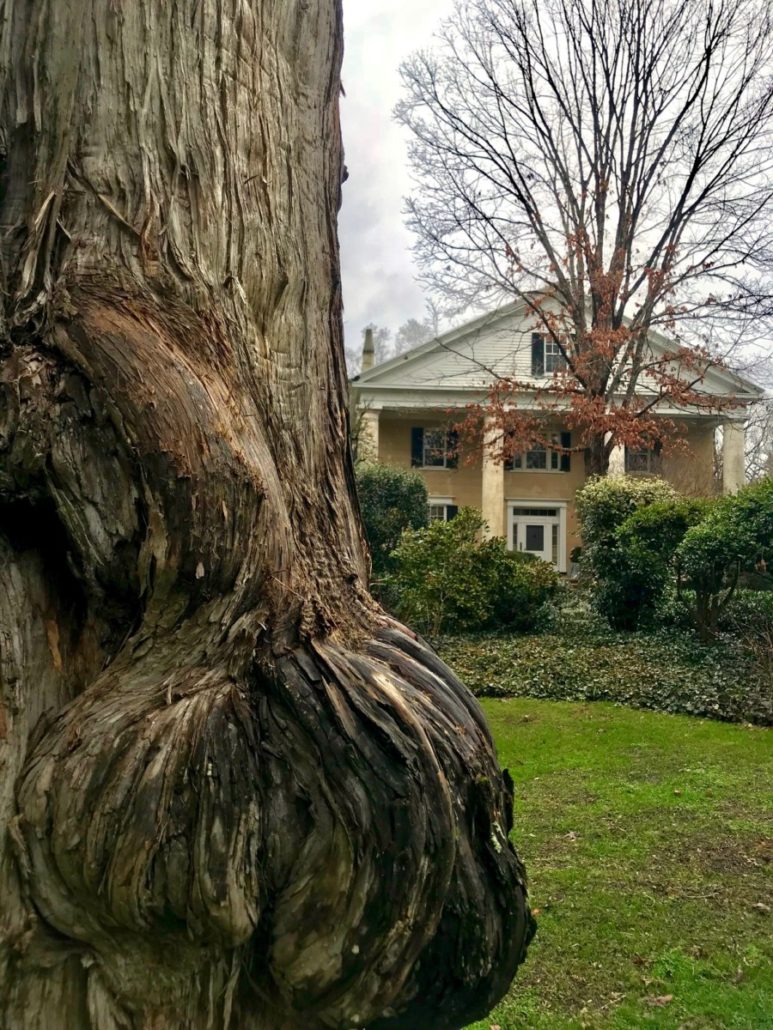 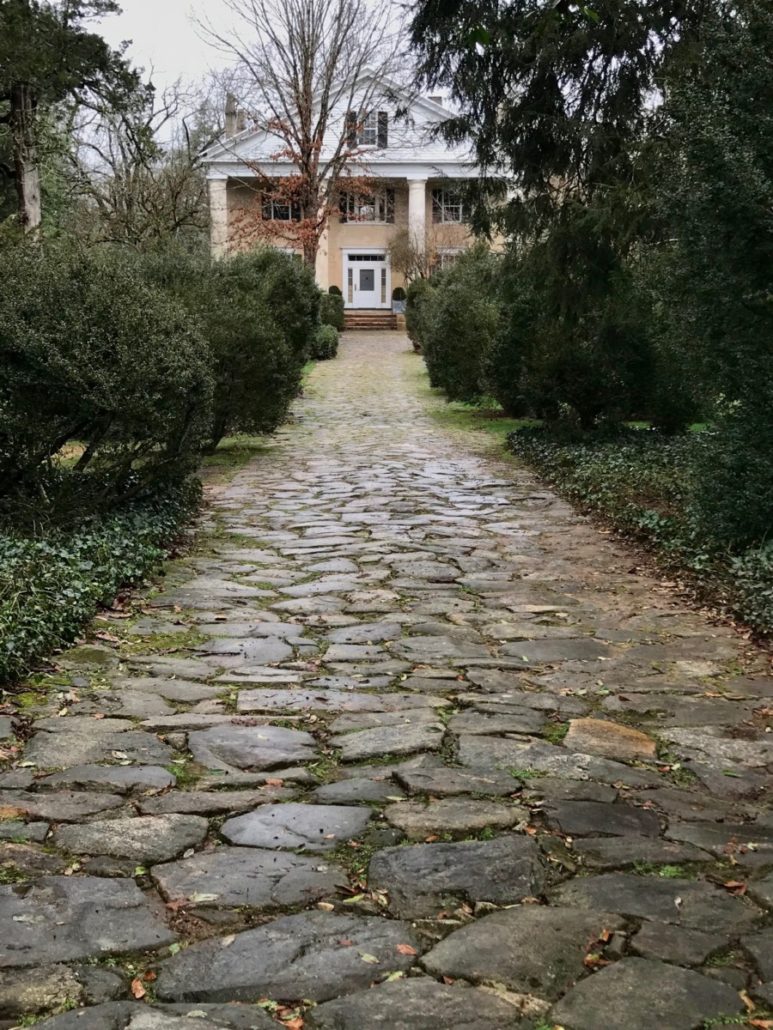 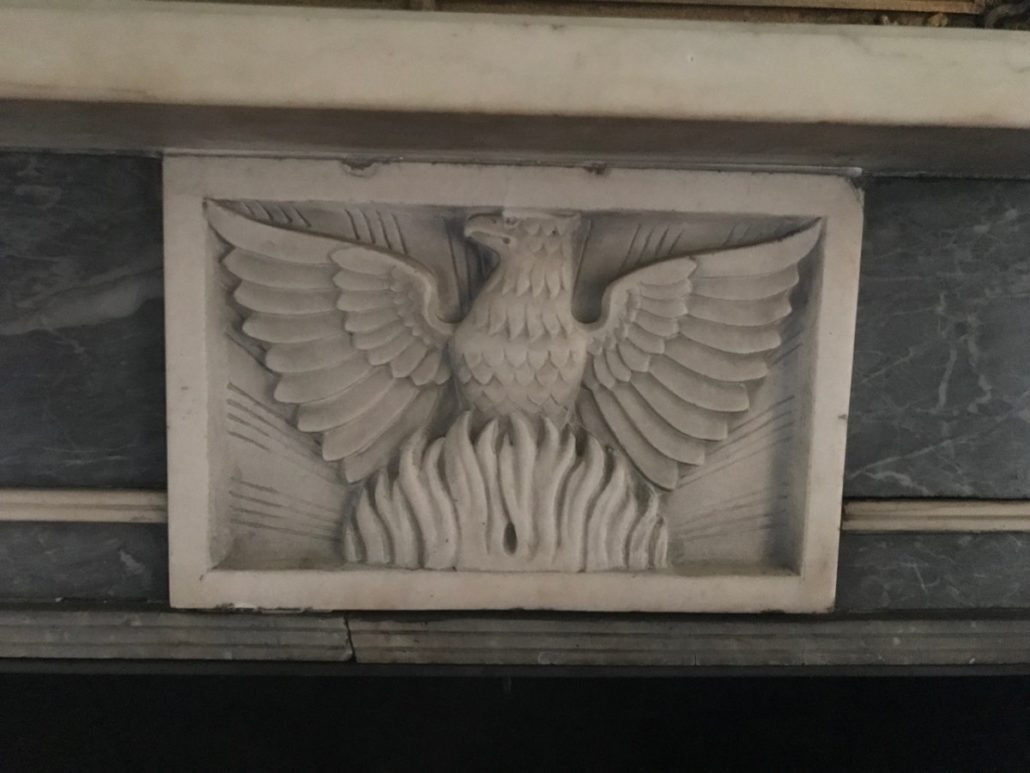 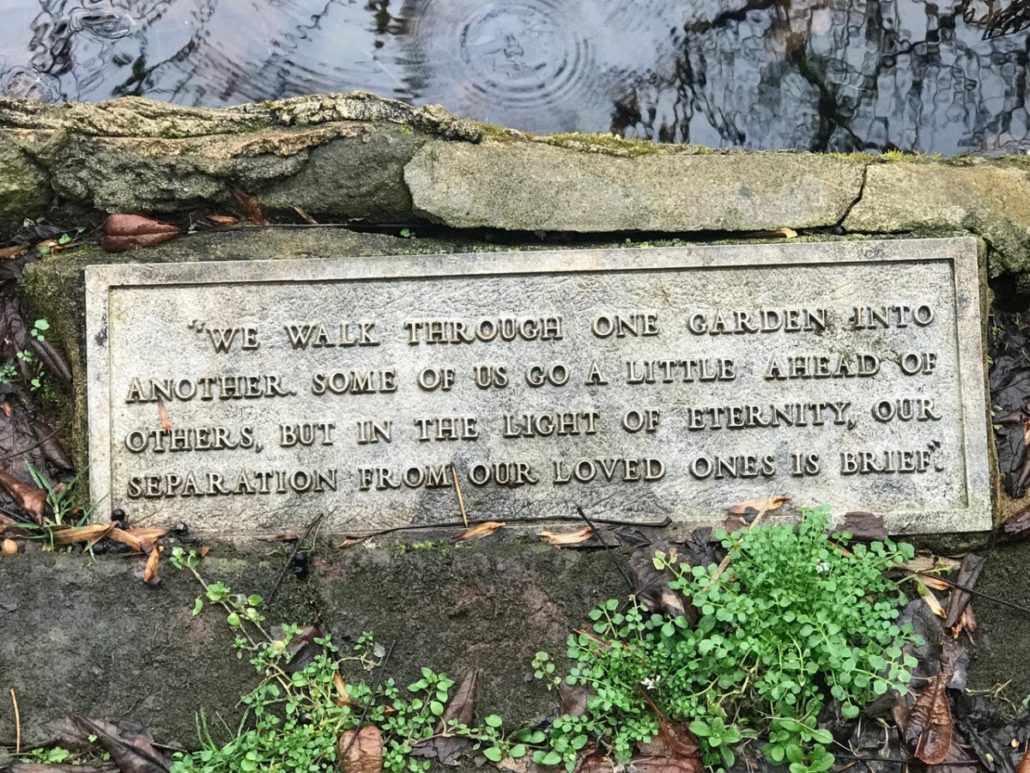 A plaque placed by Neel Reid at one end of the reflecting pool says: “We walk into one garden into another. Some of us go a little ahead of others, but in the light of eternity, our separation from our loved ones is brief.” (Photo by Maria Saporta) 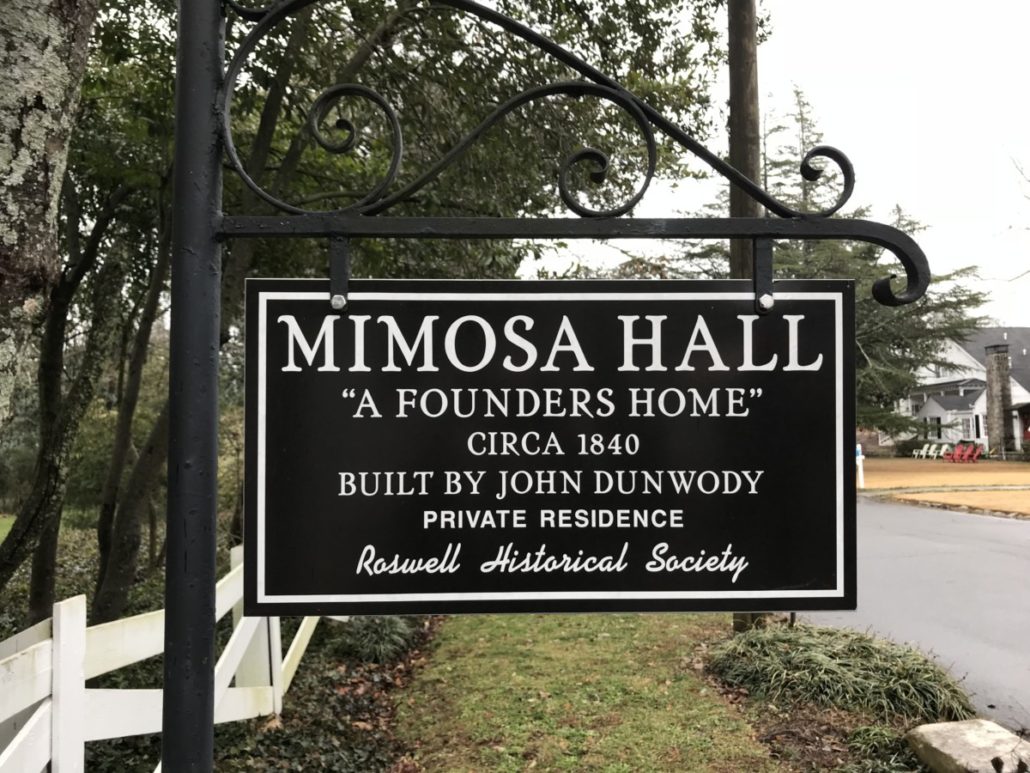