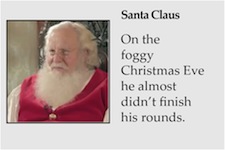 Saint Nicholas, Father Christmas, Kris Kringle, Santa Claus. He’s called by many names but his mission is always the same – deliver toys to children around the world.

We had the chance to catch up with the rosy-cheeked and eye-twinkling legacy while he was visiting Rhodes Hall, taking notes of children’s Christmas wish lists. As he told us in the accompanying Moments video, his Moment happened following one foggy Christmas Eve when some children nearly received their presents late.

Santa Claus had been delivering toys for hundreds of years and, with the help of his elves and a diet fueled by milk and cookies, he had been able to do so without fail, in one single night – Christmas Eve. He had managed to deliver toys through rain, sleet and snow and during times of prosperity and hardship. While he was able to adjust to the changing world and circumstances, there were several factors beginning to take a toll on the jolly old elf.

As more children were born over the years and mankind set up homes in new areas of far-reaching continents, there were more and more presents to be delivered. For a man whose business depended on one very productive night of the year, Santa found he would have to increase his rate of delivery in order to ensure every child’s stocking was filled and every Christmas wish came true. The challenge of increasing his fleet of reindeer’s speed coupled with the often-foggy sky and dim-lit roofs began to worry Santa.

“I was really getting worried – I didn’t know what we were going to do,” Santa said.

Santa began to ready his workshop full of elves for the busy Christmases ahead when one of the elder elves that helped oversee Santa’s workshop came to him one evening with some unsuspected news.

“Elf Jingles came into the room and said ‘Come to the reindeer barn, there is a special reindeer that has just been born,’” Santa said.

Santa ran out to the barn with Elf Jingles and as the peered in, he was amazed at what he saw – a reindeer with a bright red nose.

His nose was so shiny, some would have said it was glowing. He was starkly different from the other reindeer in the pack, but Santa had a glimmering feeling he would be special. They named the new reindeer Rudolph.

Rudolph’s bright red nose set him apart from the other reindeer, and as any child knows, being different has its consequences. Despite attempts to join in on reindeer fun and games, Rudolph remained an outsider at the North Pole.

“The other reindeer really didn’t have much to do with him because he was so different,” Santa said.

His nose became increasingly bright as he got older and by the time he was flying age, the red light was bright enough to light the sky ahead of him. In fact, some would even say it glowed.

Then one very foggy Christmas Eve, Santa’s had an idea.

Santa went up to the one-of-a-kind reindeer and said, “Rudolph with your nose so bright, wont you guide my sleigh tonight?”

“That would be the way to let us deliver all of the toys – with the bright red nose of Rudolph to lead the way,” Santa said.

Rudolph’s red nose led the reindeer pack through the foggy sky and Santa was able to continue delivering toys around the world effortlessly as the innocent, believing children lay snug in their beds with visions of sugar plums dancing in their heads.

“Ever since then, we’ve had no problem delivering the toys to all of the children,” Santa said.

The Moment Rudolph was born was a Christmas miracle that Santa credits for successful night in the past as well as those to come. The weather forecast for this Christmas Eve is uncertain, but one thing is for sure – children around the world will wake up to gifts from Santa thanks to the glowing light from a very unique reindeer. 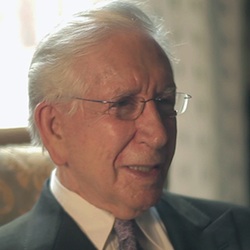 Next week in Moments: Charlie Ackerman

Next week in Moments: Charlie Ackerman, business leader, on his journey to a mystical hidden mountaintop country.